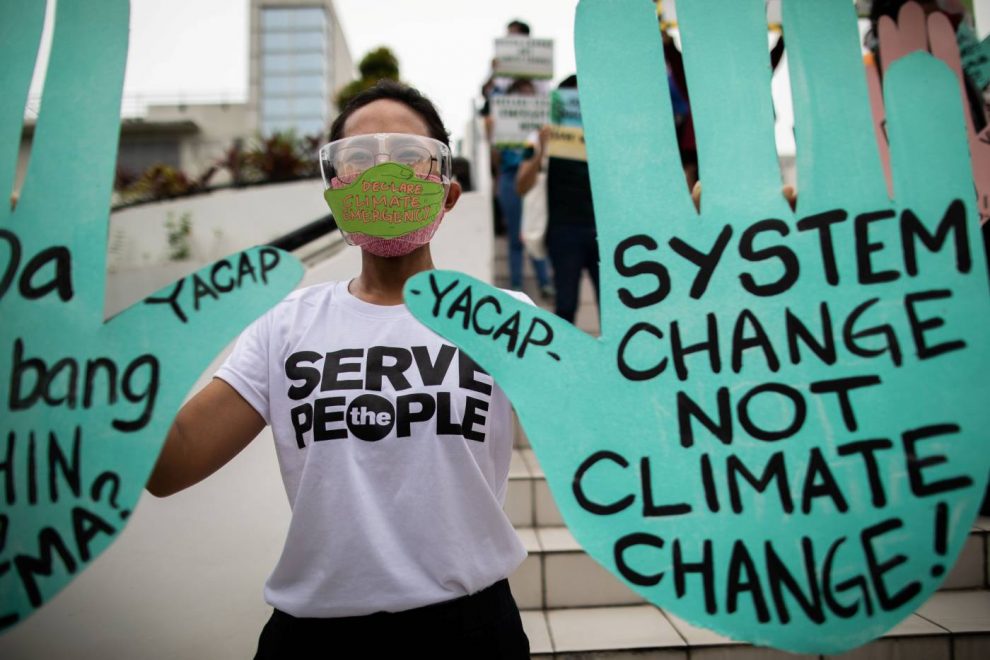 LONDON: Unable to hold large-scale street protests safely during this year’s pandemic, young climate activists are using their energy to craft their own climate policies and battling for decision-making power to make them a reality.

“We might not have the same attention as before… (but) we are going where the decisions are taken,” said Marie-Claire Graf, a Swiss member of the U.N. climate body’s youth constituency, during an online event on Thursday.

Taking to the streets in 2019 was “crucial” to raise public awareness about climate threats, she said.

Now, however, “we need young people to make the regulations, the laws, and be there when decisions are taken”, she added.

Pauline Owiti of Kenya, for instance, on Friday will present to her government a statement negotiated by youth from more than 140 countries during an online “Mock COP”, held instead of 2020 U.N. climate talks, delayed a year due to the COVID-19 pandemic.

Delegates at the youth negotiations – which produced a document in the same legal format as the U.N. talks – called for stepped-up climate education and national climate plans aligned with scientific knowledge of climate risks.

They also demanded conservation of 30% of land and oceans, more safeguards for indigenous people and a stronger youth voice in decision-making.

Owiti said she and other participants in the talks, which ended this month, will spend 2021 trying to ensure as many of the proposed measures as possible are turned into national laws.

In Moldova, young people are pushing to ensure that a new political promise to declare 25% of the country’s land protected areas will become a reality, said Vladislav Kaim, a youth advisor to the U.N. secretary-general.

Internationally, youth activists are also working to press governments to end fossil fuel subsidies and to restructure the debt of the COVID-hit poorest countries to ensure they have finance available for climate action, he noted.

He was “cautiously optimistic” that increasingly well-organised and well-educated youth would be able to bring effective pressure on lawmakers in 2021, he added.

Young people now are coming to discussions as “contributors, not listeners”, he said – and they are asking tough questions.

Graf said young people would be looking in particular for words to match promises.

“If you only declare a climate emergency and don’t act on it, it’s not going to change anything,” she said, noting that five years after the Paris Agreement on climate change was adopted, “we are still going in the wrong direction”.

She vowed to work this coming year to ensure every country delegation at the COP26 Glasgow climate summit next November included at least one youth negotiator who was “knowledgeable and professional”, not just a token youth voice.

In a report released this week, Graf’s youth constituency said more investment in green jobs was at the top of its climate agenda for 2021, as young people around the world worry about their job prospects amid a global downturn.

Ensuring stimulus spending drives a shift to more sustainable economies could help battle crises from unemployment to climate threats, and ensure that a transition to cleaner energy sources and ways of living is just, the group said.

Young people also want to see everything from an end to public bailouts of polluting companies to better protection of forests and indigenous rights, it said.

But Archana Soreng, an Indian indigenous climate activist and advisor to the U.N. secretary-general, warned that a growing push to conserve 30% of the Earth’s land and seas to protect the climate and nature risked compromising indigenous land rights.

“It will lead to a massive land grab (from) the indigenous people and local communities, and make them homeless,” she said at the online event.

“We are all one climate crisis away from becoming migrants ourselves and climate refugees,” she said, noting her own family had lost homes in record West Coast wildfires this year.

Yurshell Rodriguez, a Colombian activist, said she was made homeless by Hurricane Iota, which slammed her community on Providencia island, off Colombia’s coast, last month.

Rodriguez, one of the plaintiffs in a 2018 youth climate lawsuit against Colombia’s government, said she would press her country’s leaders this year to put in place stronger climate adaptation measures backed by youth groups.

The 2018 lawsuit, which the youth won, demanded that the government stem deforestation in the Amazon and protect young people’s right to a healthy environment.

Kaim, of Moldova, said young people working to stem climate and nature threats were increasingly professional in their approach and should be “appreciated for their skills and abilities”, not put in token positions.

“We have things to propose… and we are here to stay,” he said.

“It is not a sprint, it is a marathon,” he added. “But we are ready to run this marathon.”