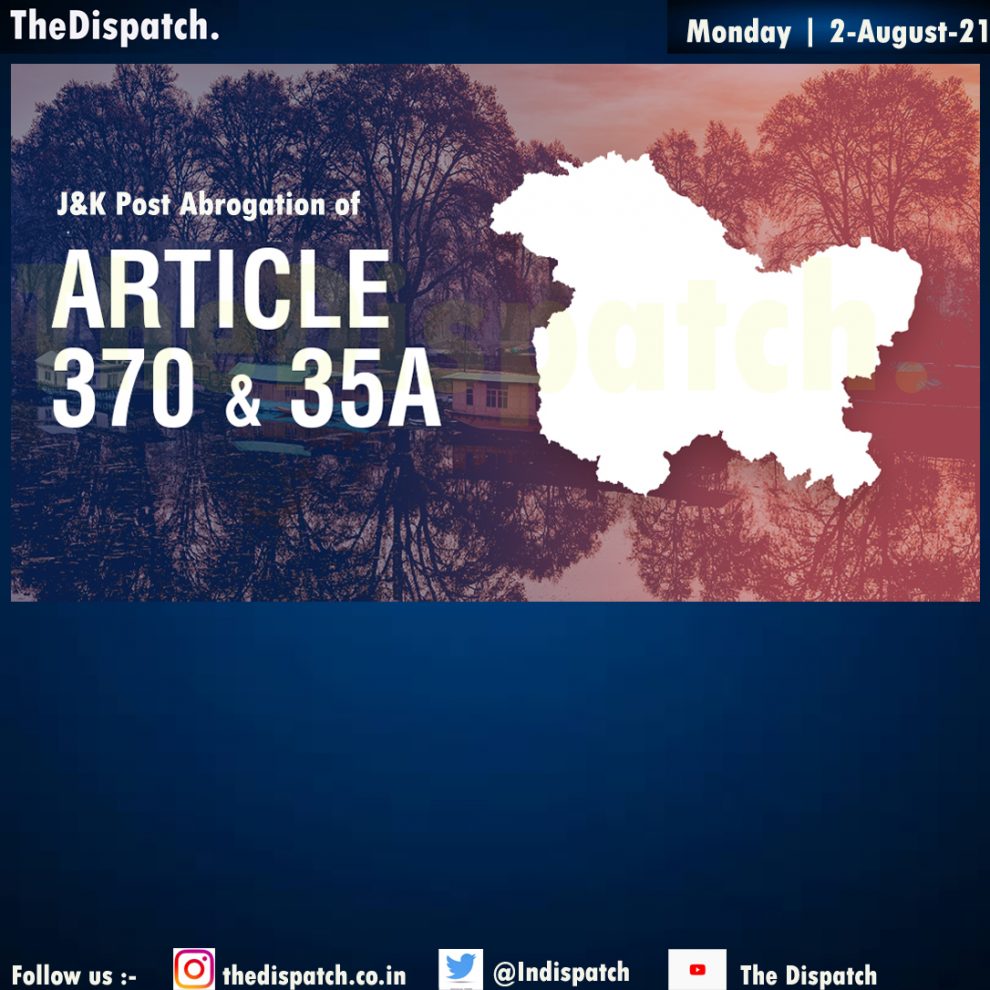 Sumeet Bhargav
Add Comment
Two years have passed since that very moment and a lot of water has now flown down the stream and new doors of development and changes are here in Jammu and Kashmir.

Famous American poet Walter Whitman once said, ” “Keep your face always toward the sunshine – and shadows will fall behind you.” And now, 129 years after Whitman’s death, his statement is turning true for Jammu and Kashmir which witnessed inclusive reforms since August 5, 2019 when Government of India announced ending special status of J&K with abrogation of Article 35-A, 370.

Two years have passed since that very moment and a lot of water has now flown down the stream and new doors of development and changes are here in Jammu and Kashmir.

Ayushman Bharat is one of the highly appreciated government effort in Jammu and Kashmir with large number of people having golden cards are getting benefited with this initiative.

Mohammad Sadeeq, a mason by profession, termed Ayushmaan Bharat is one of the highly beneficial scheme of Government which helped him of getting free of cost surgery for his brother.

” I spent nothing on a vital surgery of brother and every expense got covered under Ayushmaan Bharat for which I am highly thankful to Government of India and this became possible only with efforts of GoI.” Sadeeq of Rajouri said.

Ishan Tara while terming this initiative as a life saving one for poor people said that vital heart surgery of his father was done in Super specialty Hospital Jammu without any expense as everything got covered under Ayushmaan Bharat.

Besides a number of others, a few main ones include repealing of many state laws of erstwhile Jammu and Kashmir, improvement in power scenario through establishment of new corporations of power department, multifold increase in scholarships for minorities, reduction in militancy related incidents, fastrack recruitment process and new job opportunities.

Domicile, a new document of residentship, has replaced state subject with a large number of people from some communities living in Jammu and Kashmir from decades without residential certificate have received domicile which has been seen as one of the biggest constructive change in Jammu and Kashmir.

Inclusion of a common man in formulation of development plan of village through Deh Majlis, complete three tier mechanism of panchayti raj development plan and a better setup of local government are outcomes of these elections which J&K passed through for the first time in its history.

Economically Weaker Sections (EWS) and Pahari Speaking People (PSP) have also been given reservations while increase in salaries of employees who are now getting benefits of 7th pay commission.

” We now have reservation under head Pahari Speaking People (PSP) with is which was a decades old demand for which we are thankful to Government and this became possible only with abrogation of Article 35-A, 370.” opined Mohammad Sadam, a pahari speaking person.

Ease of Doing Business is a big decision for strengthening market in J&K besides paving way for private setups to mark their entry easily in the area whereas putting an end to prolong process of NOCs required for establishing any new industrial unit has also given a golden opportunity to locals for making their entry in industrial sector without much hardships.

One of the biggest move after abrogation of Article 35-A and 370 is one developmental front with innumberable big projects giving new shape to Jammu and Kashmir have been kickstarted which are going on in full pace.

Expedition of Jammu Srinagar railway line project with establishment of world’s highest railway bridge at Reasi over Chenab river, Shahpur Kandi dam project in Kathua, Jammu Akhnoor four lane project, Akhnoor Poonch highway project, expedition of work on Jammu Srinagar NHW project, establishment of AIIMS are a very few mega projects going on in Jammu and Kashmir which either got started or received pace after abrogation of Article 35-A and 370.

The delimitation commission exercise started now for reorganisation of assembly constituencies in Jammu and Kashmir is also a step taken in welcome mode by people of Jammu and Kashmir after abrogation of Article 35-A, 370.

” Reorganisation is one of the most important need in J&K and one can understands its requirement merely by visiting Darhal assembly constituency in Rajouri which is equal to area of two district in any other state of country and this severely affects development.” Mohammad Manzoor from Budhal saying reorganisation is a welcome step in series of betterment measure after abrogation of Article 35-A, 370.

On a whole, we can say that decision taken on August 5, 2019 is shaping new doors for Jammu and Kashmir with people are expecting more positive outcomes out of this.

The anti graft bodies like Anti Corruption Bureau (earlier Vigilance department) are now having strong teeth and have unearthed some scams which took everyone by surprise and officials as well as politician from top level to lower level are falling in net of these anti graft bodies.

And, lastly, whenever we think of this new Jammu and Kashmir post abrogation of Article 35-A, we should always remember statement of Prime Minister Narendra Modi that he gave four days after abrogation of Article 35A and had said, ” We as a nation, as a family, have taken a historic decision. A system due to which brothers and sisters of Jammu, Kashmir and Ladakh were deprived of many rights and which was a big obstacle to their development, that system has been done away with.”