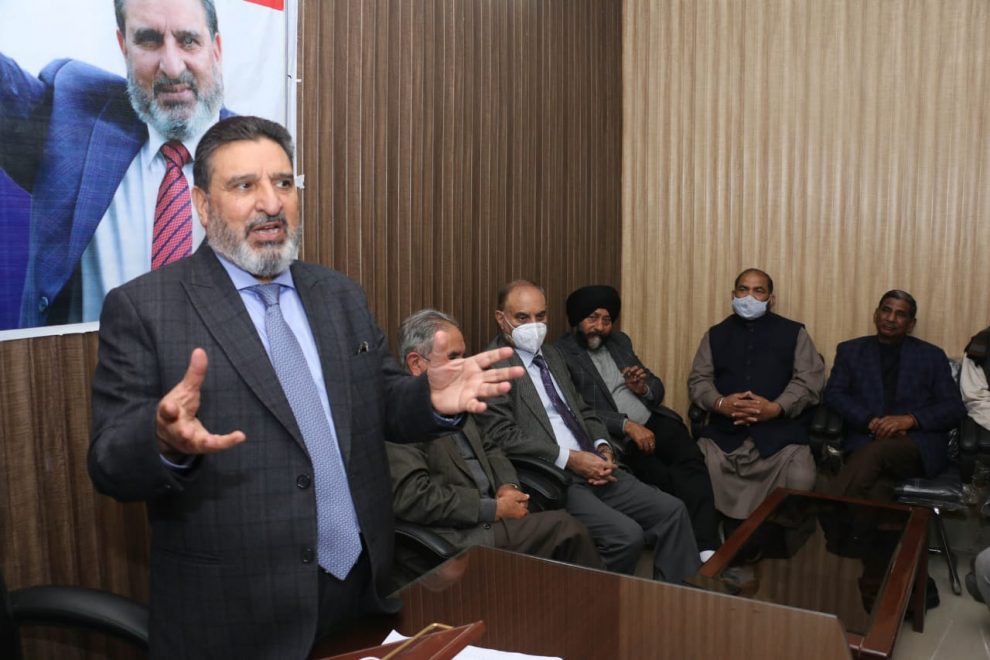 JAMMU: Apni Party President Syed Mohammed Altaf Bukhari on Thursday said his Party has emerged as a hope in Jammu and Kashmir when there was disappointment and feeling of alienation among the people.

Altaf Bukhari was speaking at a joining programme in which prominent social activist, and Congress Leader, Adv Akhlaq Hussain Khakhi along with his supporters joined the Party.

While welcoming the new entrants into the Party, Altaf Bukhari said that their joining will strengthen the roots of the Party in Mendhar and asked them to take forward the policy and agenda of the party among the masses.

“We founded this Party when there was hopelessness among the people in J&K. The people were left helpless nor did anyone represent their concerns and this was the time we decided to come out in support of the common masses,” he said.

He said that “We have tried to bring out people from the situation of hopelessness to the good future with a policy to end the divisive politics and unite the people of two regions.”

“Initially, our opponents raised several objections but the time has proved that the voice which was raised by us was right and it is due to this reason, the people from remote places across J&K are joining the Party because of its developmental centric policies and agenda,” he said.

He advocated unity among the two regions and its people while criticizing the politics of division.

“We believe in the equitable development of all the regions and districts with no scope of discrimination with any one especially marginalized section of society,” he said.

He asked the Party leaders to work to end differences in the society and make people aware about the efforts of the Party towards peace, prosperity and development in J&K.

“We will work for the people and our leaders would be approachable to everyone so that the feeling of powerlessness can be ended by empowering the people,” he said.

He said that the situation is not conducive for the people of J&K as they feel alienated with the present form of Govt. Hence, there must be assembly polls to win the confidence of the people so that an elected Govt can rule J&K.

“We have elected Govts across the country but J&K should not be treated differently and hence, the democratic system must be restored. The time has come when the Govt should think and restore the Statehood first and hold assembly polls without further delay thereafter,” he added.

He appealed to the leaders to put united efforts to resolve public issues, go to every nook and corner and meet the people and hold public meetings and launch outreach programmes.

“Our Party has received an overwhelming response from the people who faced disappointment from traditional political parties which were voted to power from the last several decades in J&K but they failed to do justice with them,” he said, and added that the lost confidence of the people must be restored.

Speaking on the occasion, Khakhi said, the agenda of Apni Party is being appreciated by the people and they believe that it is the only Apni Party that can bring out the people from the difficult situation in J&K.

The Dispatch is present across a number of social media platforms. Subscribe to our YouTube channel for exciting videos; join us on Facebook, Intagram and Twitter for quick updates and discussions. We are also available on the Telegram. Follow us on Pinterest for thousands of pictures and graphics. We care to respond to text messages on WhatsApp at 8082480136 [No calls accepted]. To contribute an article or pitch a story idea, write to us at [email protected] |Click to know more about The Dispatch, our standards and policies
TagsTheDispatch Politics AP