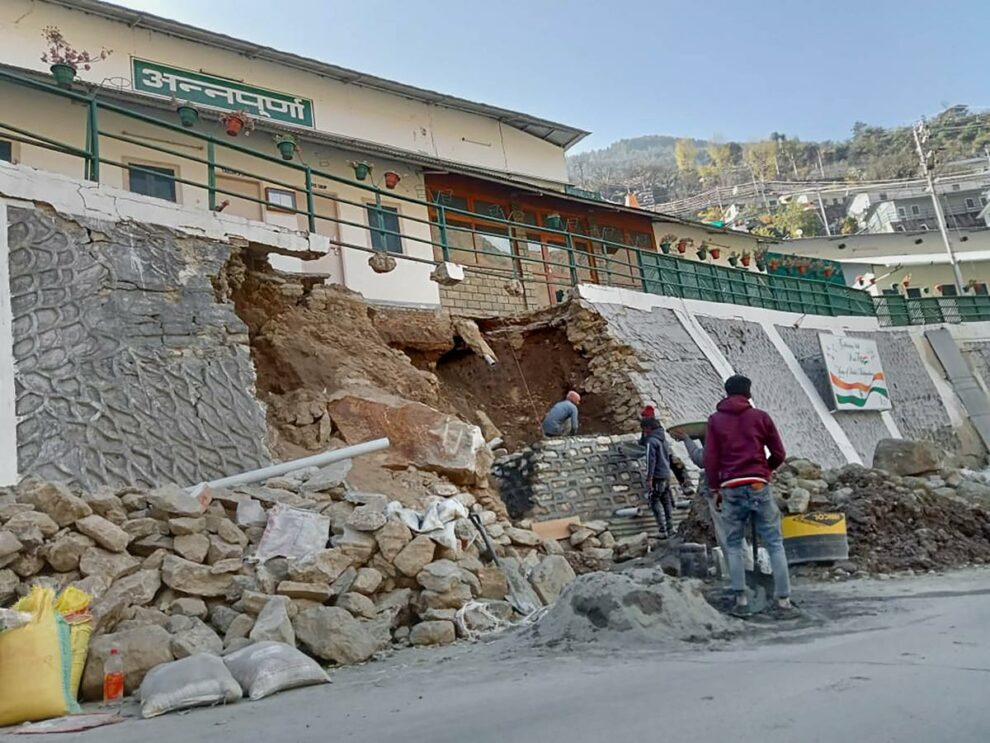 Heaven is literally falling to greed. It is just not Joshimath, but even Tehri Garhwal, Karnaprayag, and Mussoorie too are sinking and so may be many other parts at the crest of the Uttarakhand Himalayas. The Rs 12000 crore Char Dham (four abodes) all-weather road projects spurring real-estate are gobbling it up all.

Latest reports say that still the earth movers are digging around Joshimath and other areas even as over 4000 people have been evacuated and most houses are crumbling. Unfortunately, tragedies do not stop the road to hell. In 2013, the Uttarakhand government had sought Rs 21000 crore for ruthless reconstruction post the Himalayan deluge. It seems to be the catalyst for the present disaster.

The Tehri district is the latest to report cracks and land subsidence. An IIT Roorkee team is studying Karnaprayag. Chamba in the Tehri, around a Char Dham tunnelling which is the worst hit with houses crumbling.Seepages at the Tehri Dam are common, reports SP Rai of National Institute of Hydrology. Now a road from Mana to Lipulekh through the sensitive hills with rare virgin forest is the latest danger.

In June 2013, after the Kedarnath tragedy this writer had cautioned: “In all there are 244 hydel projects (HEP)of various sizes that are planned to be constructed in the State. Some of these are already on stream. Others are coming up. Pancheswar dam being planned in Tanakpur is likely to be bigger than Tehri and biggest in India. Does that mean more disasters are awaiting the region?”Unfortunately, it is so. Nobody listened to the cries even of Former Minister Uma Bharati for not dislodging the image of presiding deity, Dhari Devi before the 18 June2013 cloudburst.

The CAG reviewed 42 hydel projects in 2009. It noted that over 200 more projects were coming up – almost at every five to seven kms. The yearning for making Uttarakhand the “Urja Pradesh” has led to reckless development.Ravi Chopra, former head of High-Power Committee for Char Dham roads mentions that a bypass around Joshimath was opposed by the townspeople. The 10-metre-wide road all around the State weakens the hills with digging, blasting, removal of green cover and aquifers.

Pristine Joshimath, the gateway to heaven, Satopanth, from where Yudhisthir went to swarga; the peeth of Adi Shankaracharya; winter camp of Lord Badarinath, as per a legend may be enunciating the end of an era. Policy failure and greed to generate thousands of crores of profits has led to a disaster evolving for decades and hastened by rapid activity of hydel tunnelling, road constructions and puncturing aquifers, ill-suited for a delicate fragile region, crown of the Indian subcontinent.

Ancient wisdom ordained for least activity around tenuous hills that is shaken with the mildest vibration. No wonder even the British resorted to the least activities and built lighter toy trains where possible. They avoided wanton destruction that the swadeshi gold diggers have delved into. The broad-gauge railway being extended beyond Rishikesh could have been avoided.

The prophecy of the Nar and Narayan hills merging with the Badarinath temple vanishing seems coming true. It predicts the submergence of the temple with the Alaknanda and other rivers either vanishing or changing course.The Himalayan shrines may have contributed to wanderlust and development of the livelihood of the locals.

In itself it has culturally been supposed to be a sustainable but not large economy. Religious trekking from Rishikesh upwards added to the adventure and charm of the pilgrimage. It was for the spirit and not fun. Post-Independence, road constructions started threatening the fragile region with more landslides. With each decade greed sharpened and the massive Tehri dam was built even against the wishes of scientists and ministers. These shrines were considered sacred not only for their spirituality but as a constant reminder to tectonically sensitive zone that controls the subcontinental climate.

Joshimath is an example of how common man suffers for a pittance. Yes, Joshimath, facing literally a Himalayan disaster has been a thriving economy with a mere bank investment of Rs 900 crore! That is the total debt the entire sinking town owes. Surprising for a population of about 30,000 serving pilgrims and tourists to Badarinath, Valley of Flowers, Hemkund sahib and the ski rink Auli. The rink itself cost Rs 83 lakh and today earns Rs 4.5 crore a year but termed a hazard. The 10-meter-wide Char Dham road decays hills amid severe devastation with felling of large number of trees, destruction of aquifers, shrubs and fauna habitats.

Queer is the norm for planting trees. Trees felled on the hills are replaced with planting trees in Jharkhand or elsewhere in the country. The official files do a wonderful ecological balancing.

In 2010, HNB Garhwal University study said tunnel boring machine punctured an aquifer on December 24, 2009 releasing millions of litres of water daily from NTPC’s Tapovan-Vishnugad 520 MW hydel project. The researchers warned of the mishap’s potential for “initiating ground subsidence”. It was forgotten till December 2022 when the looming nightmare became a reality around Joshimath.This punctured aquifer gushing out water is the cause for Joshimath sinking, confirms Garhwal Commissioner Sushil Kumar.

In February 2021, around 200 people went missing as Dhauliganga and Rishibhanga rivers flooded Tapovan head race tunnel. Warnings of 1930 Swiss scientists, 1976 Commissioner MC Mishra on haphazard constructions and the Supreme Court appointed committee of 2013 for seismically sensitive Main Central Zone advice against hydel projects were ignored. The Char Dham project of the Border Road Organisation was being touted as a defence project, though it was not so earlier, has only aggravated the situation.

In ‘Incidents of glacial lake outburst floods (GLOF)’, a UNDP and European Commission study mentioned that such floods are happening regularly. Notable incidents occurred in 1997, 2000 and 2005 in the Sutlej basin and in 1970 and 1978 in Alaknanda and Bhagirathi basins. In 2000 and 2005 it hit the Pong Dam, in Himachal Pradesh, severely, damaging roads, habitations and scores of bridges. Incidents of GLOF are reported in Sikkim, Ladakh, Jammu and Kashmir, Himachal Pradesh and Arunachal Pradesh.

The Himalayas all around are crumbling. Dams and roads benefit the industry-real estate mafia damning the sensitive geology and livelihood. If unchecked it may have disastrous consequences and even desertify, cradle of the civilisation, the Ganga valley. The country must rise to stop it.—INFA

This January 19, let’s go beyond just remembrance
Govt-SC Conflict: Is It One Upmanship?
Comment