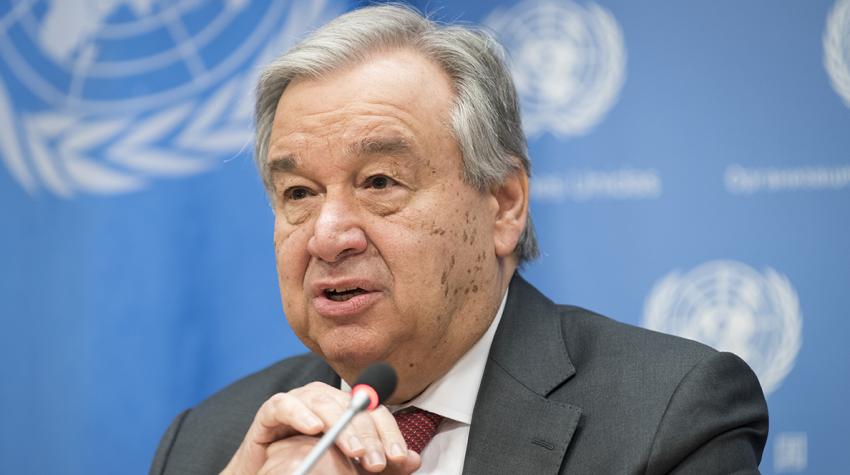 UN General Assembly on Friday appointed Antonio Guterres as the UN Secretary General for a second term beginning January 1, 2022, days after the powerful Security Council unanimously recommended his name to the 193-member body for re-election.

President of the 75th session of the UN General Assembly Volkan Bozkir announced that Guterres has been appointed by acclamation as the Secretary General of the United Nations for the second term of office beginning on January 1, 2022 and ending on December 31, 2026.

Bozkir then administered the oath of office to 72-year-old Guterres at the podium of the UN General Assembly Hall.

On June 8, the 15-nation Council had held a closed meeting where it adopted by acclamation the resolution that recommended Guterres’ name to the 193-member General Assembly for a second five-year term as Secretary General from January 1, 2022-December 31, 2026.

Estonia’s Ambassador to the UN Sven Jurgenson, President of the Council for the month of June, had told reporters after the meeting: We have all seen actually the Secretary General in action.

“I think he has been an excellent Secretary General. He’s a bridge builder, his views on the conflict zones in the world and he’s able to speak to everybody. And I think this is something that is expected from the Secretary General and he has proven worthy of the post already with the five years that he has been in office, Jurgenson said.

India had expressed its support for re-election of Guterres as UN Chief and welcomed the adoption of the resolution recommending his name.

Last month, External Affairs Minister S Jaishankar met Guterres at the United Nations headquarters and expressed New Delhi’s support to him for his second term as the world’s top diplomat.

India values UNSG’s leadership of the UN, especially in these challenging times. Conveyed our support for his candidature for a second term, Jaishankar had said in a tweet after the meeting.

Later a press release issued by the Permanent Mission of India to the UN also stated that Jaishankar conveyed that India values Secretary General’s leadership of the United Nations, especially in these challenging times. He conveyed India’s support for his candidature for re-election for a second term.

Under the UN Charter, the Secretary-General is appointed by the General Assembly upon the recommendation of the Security Council. Each Secretary-General has the option of a second term if they can garner enough support from Member States.

Guterres, the ninth Secretary-General of the United Nations, took oath of office on January 1, 2017 and his first term ends on December 31 this year. Former Prime Minister of Portugal, Guterres served as the United Nations High Commissioner for Refugees for a decade from June 2005 to December 2015.

Guterres, nominated by the Government of Portugal, has been the only official candidate for the position of Secretary General and his re-election was a given. There has been no woman Secretary General in the UN’s 75-year history and Guterres’ re-election will mean that any possibility of having a female lead the world organisation can come only after 2026.

In March, Guterres had circulated his vision statement and earlier in May, laid out his case for a second term to UN Member States during an informal interactive dialogue convened in the General Assembly Hall.

Guterres was elected after a reformed selection process that included a public informal dialogue session in the General Assembly, involving civil society representatives, aimed at ensuring transparency and inclusivity.

In his vision statement ‘Restoring trust and inspiring hope’, Guterres said that the imperatives for the next five years include mounting a massive and enduring response to the COVID-19 pandemic and its consequences in the short-term, leaving no stone unturned in the search for peace and security, making peace with nature and climate action, turbocharging the Decade of Action to achieve the Sustainable Development Goals and advocating for a more equitable world, ensuring the centrality of human rights, taking gender equality to the next level, focusing on people, rising to the challenge of digital transformation, advancing multilateralism and the common agenda, embarking on a United Nations 2.0′ and rekindling shared commitment to enduring values.

As we emerge from the pandemic, the UN is more relevant than ever We must act as a catalyst and a platform for more inclusive, networked and effective forms of multilateralism. Our direction of travel is clear on peace and security, climate action, sustainable development, human rights and the humanitarian imperative. Our power to transform the current situation into a better world and future for all depends on everyone everywhere and can only be done successfully if we are resolute and resolved to combine our efforts towards our common agenda for the benefit of humanity and the planet, Guterres said in his vision statement.