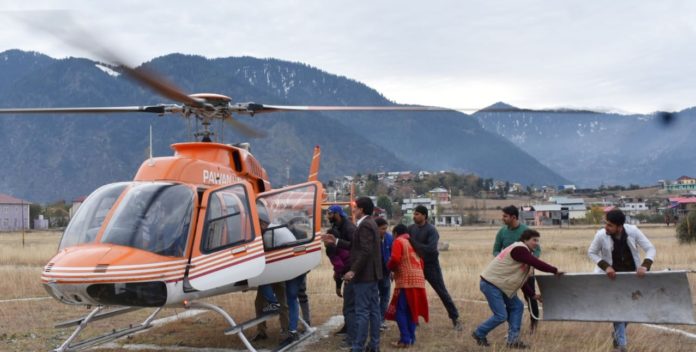 In less than 24 hours of a fatal accident that took away lives of 16 persons, killer roads of Jammu yet again claimed lives of four Sarthal Mata pilgrims, when their vehicle skidded off the road and fell into a deep gorge in Kishtwar district on Wednesday.

Three among the six injured are stated to be critical and were airlifted from Kishtwar to the Government Medical College for specialised treatment.

On Tuesday, 16 persons—14 of a single village- were killed when a taxi had also rolled down and fell into a 700-metre deep gorge in Doda.

“A Maruti Eeco bearing registration number JK17-6479 with 10 passengers on board was on its way from Palmar village to Sarthal temple in Kishtwar district,” police officials said.

They said that when the van reached Mandir Morh on Wednesday afternoon, the driver lost control over it, and the vehicle fell into a deep gorge.

“There were ten people travelling in the vehicle against its seating capacity of six. The driver lost control over the steering while negotiating a turn at Mandir Morh and the van rolled down the deep gorge,” they said.

“Police and locals rushed to the spot and shifted the injured to a district hospital in Kishtwar, where doctors declared four of them brought dead,” the officials said.

Three critically injured people were shifted to the Government Medical College Jammu– two through a chopper and one through ambulance for specialised treatment.

District administration, Kishtwar, provided immediate relief of Rs 10,000 each to the family members of the deceased and 5,000 each to the injured out of District Red Cross Fund.

This is the second such incident to have hit the Chenab Valley region in past 24 hours.

The former chief minister went to his native town Doda to meet the grieved families of Manjota village. He pointed out that roads in Doda district were no lesser than a death trap and that the region contributes to majority of deaths in road accidents, drawing government’s attention towards it.

Accidents on hilly roads of Jammu have become too frequent, even as the administration is yet to formulate some effective measures to avert them.

Meanwhile, Lt Governor Girish Chandra Murmu today sanctioned ex-gratia of Rs 1 lakh each for the Next of the Kin (NoK) of those who died in a road accident near Khellani on Batote-Kishtwar National Highway.

“The Lt Governor has expressed grief and sorrow over the loss of lives in accident. In a message, he expressed heartfelt condolence to the bereaved families and prayed for eternal peace to the departed souls,” an official spokesman said.