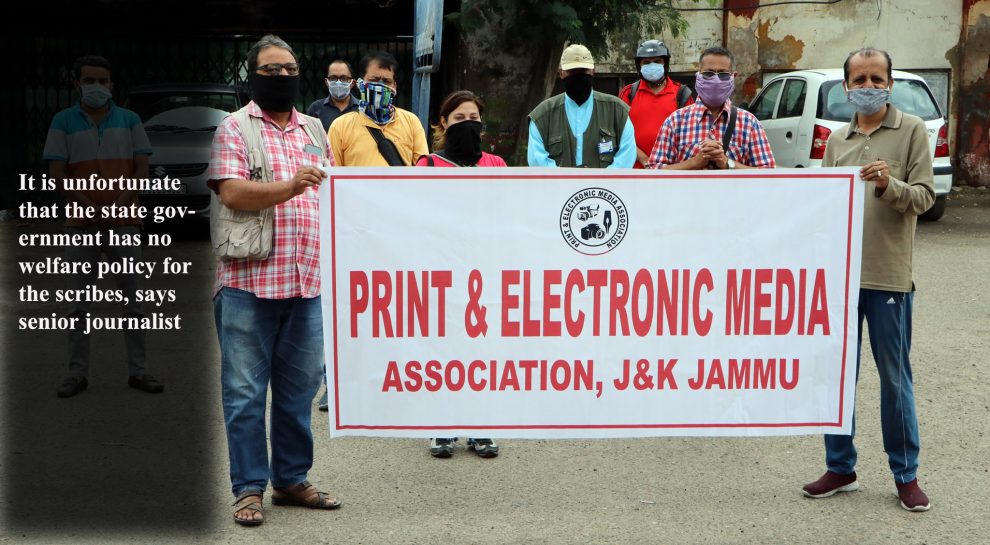 Jammu: Amid coronavirus pandemic, when mediapersons are risking their lives to aware masses about the guidelines being framed time to time, Jammu and Kashmir journalists in one voice have said that it is the high time for the government to announce welfare scheme for the fraternity and also declare them the frontline warriors.

The journalists charged the earlier governments with not being serious in addressing the concerns of the community vis-a-vis not bothering in introducing welfare scheme for them, but expressed high hopes from the Jammu and Kashmir Lieutenant Governor Manoj Sinha, also known as ‘Vikaspurush’, and are confident that their demands will be fulfilled.

Senior Journalist and Former President, Press Club of Jammu, Manu Srivatsa said that almost all the states have declared journalists as frontline warriors but the Jammu and Kashmir Government has yet to take a call on this.

”The Government must take initiatives like Maharashtra, Madhya Pradesh and Uttar Pradesh and announce welfare schemes for the journalists but the administration is showing a non-serious approach in this context,” said the veteran journalist.

Another senior journalist and sitting president, Press Club of Jammu (PCJ), Ashwani Kumar feels that it is almost more than a year now everyone is fighting against COVID pandemic but surprisingly, journalists have not yet been declared COVID warriors by the J&K government and no helping hand has been extended to them.

”J&K is now a Union Territory and likewise other parts of the country, journalist should get priority,” he expressed quoting an example that vaccination process for 45 years and above was announced previously but there was no exclusive provision for journalists to get vaccinated at a ‘special counter’, which is need of the hour.

Moreover, there is no medical cover, insurance scheme, pension policy, financial assistance or any other welfare measures introduced by the government, he said and added, ”due to pandemic, many media houses have shut, many working journalists lost their jobs and if financial assistance can be announced for others, why not for the journalists?”

On the lines of Working Journalists Association of India in collaboration with the Union Ministry of Information and Broadcasting, the Directorate of Information and Public Relations (DIPR) jointly with the Government of Jammu and Kashmir, must come up with a policy in the welfare of the journalists, suggested the PCJ Head.

Jammu Bureau Chief, Daily Excelsior and General Secretary, J&K Chapter of Indian Journalist Union, Sanjeev Pargal asserted it is unfortunate that the state government has no welfare policy for the journalists.

”Many states have pension scheme for the fraternity but J&K governments never considered such welfares,” Mr Pargal said.

Many states have a provision for accredited journalists to avail several benefits but accreditation card issued by the J&K DIPR is of no use and just a mere formality, Mr Pargal said.

”J&K being a conflict zone should have given more benefits to the journalist community. Many journalists lost their lives while performing professional duties and many are facing chronic health issues but the government is hardly bothered,” he rued.

Mr Pargal added that Press Club of Jammu is always helping journalists those in need, adding, ”if Press Club of Jammu can come up with a life insurance scheme for journalist members then it is not a hard task for the government to launch such a scheme in which the DIPR can act as a bridge.”

Editor in Chief, Kashmir Images, Bashir Manzar, says, ”The Welfare Scheme should have been introduced way back because J&K is a conflict zone and many journalists have sacrificed their lives in the line of duty.”

”Government never took it seriously. Even now, when the journalists are performing duties during COVID, but still they have not prioritised it,” said Mr Manzar, adding that the New Media Policy of the government, having a welfare scheme, is only a ”lip service”.

”Previously also successive governments claimed that funds were announced for journalist welfare but nothing was visible on the ground and it was only a lip service and nothing else,” said the veteran scribe.

He however, advised that the Government must announce a concrete policy for the journalists and by delaying the same they are doing injustice.

He also appealed that the journalists of Jammu and Kashmir must jointly raise this concern at right quarters.

Senior journalist with Times of India, Saleem Pandit speaking to UNI said, ”it is need of the hour that the government should have to think about the welfare of the journalists, which successive governments failed to do”.

”Journalists are fighting insurgency and working under testing times for the last more than three decades and they are not being treated properly by the administration,” he expressed.

He said that the Delhi government has declared journalists as ‘Frontline Warriors’ but J&K is still in slumber, adding,”the community is suffering firstly due to pandemic and secondly the insurgency. They should have at least announce such schemes so that the families of the journalist are secured”.

Senior Editor, Times Now, Pradeep Dutta said, ”Prime Minister also spoke about this during the first wave of COVID making a special mention that journalists are ”COVID WARRIORS” but despite that the DIPR begin with symbolism to vaccinate 45 years of age and above.”

”We are not begging and they are not doing any favour by vaccinating us because health at present is a priority to every citizen and when journalists are going into field, making people aware about this killer virus, even helping the infected and in return, being denied vaccine and not declared frontline warriors, is a sad state of affair,” said Mr Dutta.

It is a case of lost priority, he said.

”Virus doesn’t discriminate between anybody, babu, mantri or santri then why are you discriminating? They (journalists) are creating awareness by risking their lives,” he said adding, ”we try to address everyone’s issue but nobody speaks about us.”

”There are many people who really need help, many have lost their livelihood but how many have been helped by the government is a serious concern,” he expressed and said that why the government doesn’t extend help to the needy. Why the Funds in the coffers of the government cannot be utilised for journalists welfare?

”Journalists are not beggars. We believe in dignity but give us what we deserve,” he said.

”Lot of journalists have been silently suffering due to health issues like heart problems, cancer, and other ailments and running from pillar to post for financial help. Why don’t the government extend helping hand to these people, who have been covering them with news content and pictures,” expressed the senior journalist.

Deep Depression over the Arabian Sea likely to further intensify into severe Cyclonic Storm in next 24 hours
Pollution level improves in Jammu, AQI drops by 20 points in 2-weeks
Comment