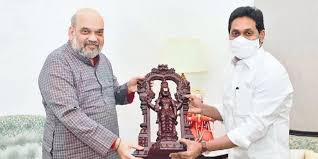 According to a statement from the Chief Minister’s Office (CMO), “The Chief Minister submitted a memorandum on Polavaram and urged him to consider the second revised cost estimate as per the 2017-18 index and pass the Rs 55,656 crore expenditure and give necessary instructions to the Finance and Jal Shakti Departments accordingly.”

“An amount of Rs 1,779 crore is still pending towards reimbursement of Polavaram works along with December 2018 Bills. Any delay will further escalate the cost and the national project, which is the lifeline should be expedited,” he told the Home Minister.

Reddy also appreciated Shah’s efforts in battling the COVID-19 pandemic in the country.

He apprised the Home Minister about the effective steps taken during the COVID-19 pandemic. Even during the difficult situation, the welfare schemes were not stopped. The State machinery is in full preparedness as per the Central guidelines in the distribution of the COVID-19 vaccine as per the priority norms set and the vital cold storage links are being established.

Reddy reiterated that Special Category Status (SCS) is important for development of the state.