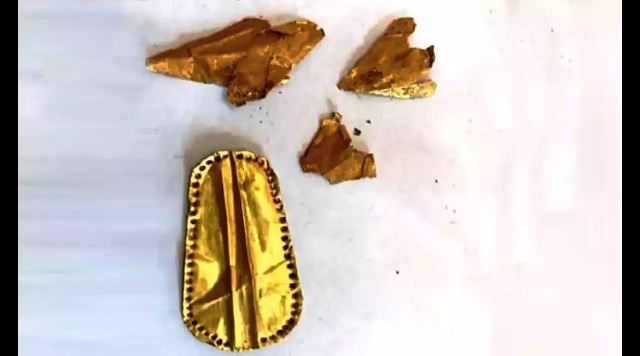 Cairo: Archaeologists have discovered several ancient mummies with golden tongues in Egypt. The mummies were discovered at the Quesna necropolis in the central Nile Delta.
The mummies with golden tongues were discovered during an Archaeological Mission in Quesna cemetery. The tombs in the area date back to different periods of ancient time, according to a report in Egypt Independent.
The mission was carried out on the orders of the Supreme Council for Archeology in an area, which is an extension of the archaeological compound. Some of the other unearthed skeleton have their bones glazed in gold, and others were buried near gold-shaped scarabs and lotus flowers.
While the condition of some of the mummies is not very good, those with gold linings are still intact, the outlet said. Some wooden coffins and copper nails used in those coffins have also been found from the site, the outlet further said.
The site where these mummies were found was discovered in 1989, and thought to have been occupied during the Ptolemaic and Roman periods (between 300 BCE and 640 CE).
A similar discovery was made in 2021, when researchers digging at 2,000-year-old site in Egypt unearthed a skull with tongue-shaped ornament. A few months later, a man, a woman and a child were found with golden tongues, with researchers saying the skeletons date back more than 2,500 years.
According to Egypt’s Ministry of Tourism and Antiquities, the discovery suggests the customs at each level of burial were different from each other, and even had different burial directions. This, the ministry said, indicates that the cemetery was re-used in the Late Period of Ancient Egypt, the Ptolemaic period, and two phases in the Roman period. (Agencies)