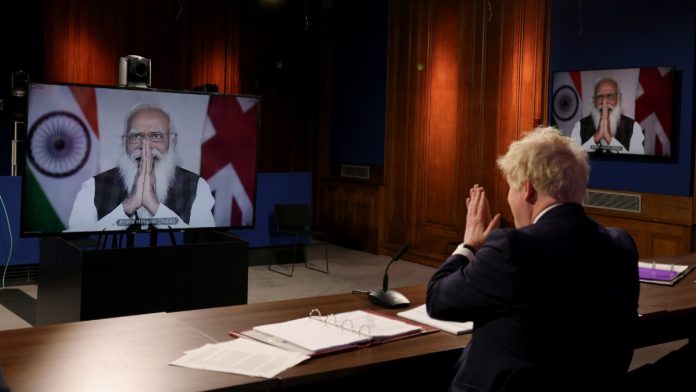 Prime Minister Narendra Modi and British Prime Minister Boris Johnson had a virtual summit last Tuesday, which led to an Enhanced Trade Partnership between the two countries. The summit was held on the eve of G7 conclave in Britain attended by Foreign Minister, S. Jaishankar. The two leaders drew the 2030 road-map leading eventually to signing of a Comprehensive Strategic Partnership. Meanwhile, there will be an interim trade agreement signed by mid-2022 culminating later into a Free Trade Agreement.

The Summit assumes significance for more than one reason. Johnson had cancelled his visit to India twice, once last January when he was invited to be the chief guest at the Republic Day, as he had to deal with the scourge of the second surge of the Covid virus in his country, and again in April, when the India got hit by the second wave. Second, both countries have retreated from regional trading arrangements, India from the China-centric Regional comprehensive Economic Partnership, and Britain from the European Union. Third, both countries have been badly hit by the Pandemic and are fighting their way out of it.

Surprisingly, with a deep shared history albeit of colonialism which spawned several common structures, political. bureaucratic, military, educational and social (upper middle class), India and Britain relations have not been as seemly as they should have been. Both countries have been seen as natural allies in the international community. India could substantially join European Community only after Britain was admitted into it as a member in 1973. When I was asking for a membership for India in a non-governmental international entity where a British organisation was a member, the Swedish organisation lobbying for us suggested that we should secure the support of the UK member too.

While New Delhi has been able to build solid relations with countries like France, Germany and USA, the bilateralism with the United Kingdom has lagged. Although the British Labour Party in Government announced the independence of India n 1947, it has been more hostile than the conservatives to India. In 1997, 24 years ago, when the British Foreign Secretary Robin Cook accompanied the Queen on a state visit, he raised the Kashmiris’ right to self-determination. Cook was of course an out-spoken, garrulous politician who had to demit office mid-stream.

Tony Blair and Gordon Brown tried to repair the relations, but not to great effect. Their successor, Jeremy Corbyn who led the Labour party to two defeats displayed more negative attitude towards India by meddling in Kashmir and other domestic issues like the farmers’ agitation against the three new laws passed by the Indian government.

Admittedly, the large diaspora in Britain from the Indian sub-continent plays into British electoral politics. Yet the leaders from the Conservative Parties have seen India as a rising country and have respected New Delhi’s strategic autonomy. From John Major, who supported India’s globalisation plans, to David Cameroon who wanted to deepen the relations, to Theresa May who acknowledged India’s sovereignty in determining its domestic issues, to flamboyant Johnson promising to take the relations to a new paradigm. It should be noted that Johnson was in the forefront of the campaign to exit European Union. Therefore, Johnson will have to expand the trading and strategic links of Britain to compensate for the loss of such ties with the EU. India seems to be the first stop on that journey.

The relations between India and Britain were soured by mutual perception and prejudices. Britain tilted towards Pakistan resenting India’s international stature Under JL Nehru and took long to shed its superiority complex. Likewise, India suffered from a colonial hangover and looked away from Britain despite being a big member of the Commonwealth. Much water has flown since down the Thames and the Ganges. Both countries now deal with each other as two important members of the international community.

Against the above backdrop, the recent summit should be seen and appreciated for the headway achieved so far. To start with, Johnson announced a trade and investment package of one billion pounds and shared with Modi that Serum Institute has made an investment of 240 million pounds to manufacture nasal vaccines for Covid. Around the Summit, apart from the Enhanced partnership, eight other agreements were signed. The Partnership is based on five pillars: trade and economy, defense and security, climate action, health and people-to-people contact. All these agreements are expected to generate 25000 new direct and indirect jobs in India. Both leaders agreed to double the volume of their trade by 2030.

As per the Agreement, Britain will open up Indian fisheries, allow the nurses to seek jobs and accept the seafarers’ credentials. In return, India will allow the import of fruits and medical devices under UK certificate of free sale. Both countries have agreed to move towards a social security agreement. The two sides resolved to work towards reciprocal opening up of legal services. The other agreements included emerging technologies, digital infrastructure and data policies, cooperation in telecommunications and ICT, customs cooperation, and collaboration on medical product regulations etc.

Significantly, a Memorandum on Migration and Mobility partnership was signed. The MoU is meant to facilitate legal movement of students and professionals and will check illegal migration. Under this understanding, about 3000 young Indian professionals every year could get employment in the UK for two years without facing the labour market test.

Both Modi and Johnson agreed to enhance the defense ties too. They decided to increase the maritime and industrial collaboration. Maritime information will hence forth be shared between the two sides. India invited UK to join India’s naval information fusion Centre and to participate in the trilateral naval exercises. Another notable step taken is to sign a Logistics Memorandum of Understanding between the armed forces.

The partnership agreement and the road-map augur well for both the leaders. Johnson is looking out for new opportunities for Britain especially after he led his country to withdraw from the European Union. He has shown interest in joining the India-Pacific security arrangement led by the Quad. For him, India should be a big market and player to engage with.

Likewise, Modi’s international image has got a drubbing after he misread the Covid situation, the onslaught of the second surge. In a matter of months, Modi who was feted by the international community for deftly handling the pandemic, producing and supplying abroad the vaccines, became an object of sympathy for many global leaders. He desperately needed recognition and formal collaboration like he got from Britain. This should give him a new lease of life in international politics.

To be sure, Modi can exult in the outcome of the Summit; he tweeted, “had a productive virtual summit with my friend UK Prime Minister Boris Johnson”. Modi will have to fix the health care system, efficiently disburse the aid pouring in from countries, save lives by providing hospital beds and oxygen, and check the spread of the virus by vaccinating people and enforcing the protocols. The death and destruction caused by the second surge will haunt Modi unless he fixes things quickly. He should not forget the practical reality, that is the local is global. —INFA