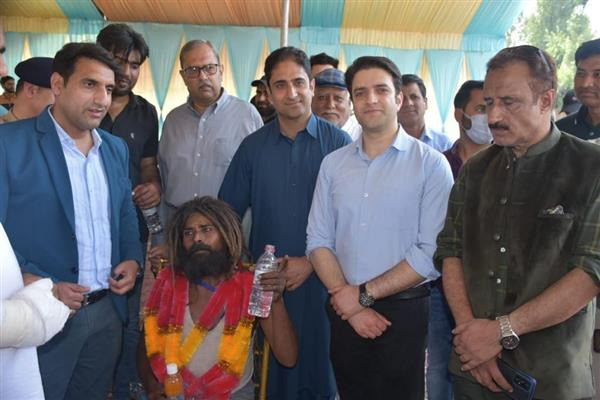 SRINAGAR: Amid tight security cover, the first batch of Yatris reached Nunwan base camp Pahalgam on Wednesday amid warm reception by locals and the officials.

Emotional scenes were witnessed at Pahalgam and Baltal base camps as locals and officials received Yatris with open arms. The pilgrims, witnesses said were presented garlands and bouquets. Yatri started after a gap of two years as the pandemic created hurdles for it. Many locals were seen hugging the pilgrims, giving the emotional touch to Yatra.

Officials told that the first batch of Yatris have reached Pahalgam and Baltal base camps amid tight security cover of CRPF and police.

They said that all security arrangements besides other basic facilities are also in place for the pilgrims.

They added that the first batch will leave for Baltal and Chandanwari in tight security besides all other arrangements.

The 43 day Yatra this year will conclude on August 11 on the Occasion of Raksha Bandhan. Amarnaath Yatra is being organised this year after two years as it remained suspended due to Covid. Yatris who reached Pahalgam were seen very happy besides complimenting the security arrangements.

“I am coming for the 25th Yatra and we are very happy with the arrangements made by the government,” said a Yatri from Maharashtra. He said that they will visit Chandanwari and Baltal and will pray for peace and prosperity of the country—(KNO)