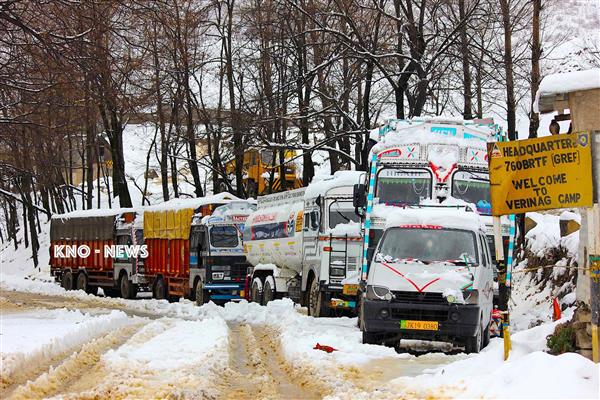 Srinagar, Jan 14: Amid closure of Srinagar-Jammu highway, the only road connecting Kashmir with rest of the country remains closed from past ten days,  the government here on Thursday stated that there was no dearth of essentials  and said that “adequate stock is available to ensure the people don’t suffer.”

However, the black marketing as well as skyrocketing prices of essentials especially the food-stuff here has left the consumers suffer.

Local consumers said that black marketing and profiteering amid the closure of Srinagar-Jammu highway is at peak.

As already reported by KNO two days back, the consumers are being pushed to the wall as the prices of every essential especially the food stuff including the vegetables have gone up all of a sudden, thus leaving them to suffer.

Altaf Ahmad, a local consumer from Rawalpora had said that the vegetable dealers in Mandi should be dealt with strictly as they use to keep the food stuff hide always especially when the only road remains closed for the traffic.

“The street vendors have nothing to do with the soaring prices of essentials as they are receiving the stuff at exorbitant rates from the respective Mandis,” Ahmad had said, adding that it is unfortunate that the prices of essentials including vegetables vary from place to place.

Meanwhile, Director, Food, Civil Supplies and Consumer Affairs (FCS&CA) Bashir Ahmed Khan told KNO that there is no dearth of essentials as of now, saying that every essential was stocked well on time.

He said that 8 lakh quintal ration is currently available at FCI for two months while Gas is also stocked for almost 15 days. Khan further stated that adequate petroleum products are also stocked at present, thus there is no need to panic.

About black marketing and skyrocketing prices, Dire FCS&CA said that the market checking is going on daily basis and in this month only, the department has lodged 45 FIRs against the norm violators while seven shops too have been seized so far.

The drive against the norm violators will continue in the future as well, he said