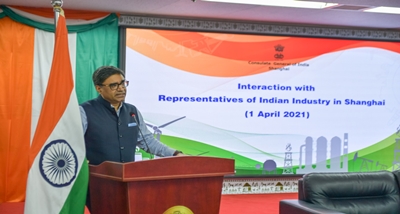 India’s Ambassador to China Vikram Misri interacted with representatives of Indian industry in Shanghai yesterday. He will also launch [email protected] celebrations today in Shanghai. The event was attended by more than 30 representatives representing 8 sectors such as textiles, pharma, electronics, manufacturing, chemicals, IT, banking etc. AIR correspondent reports, Ambassador Misri discussed the issues related to business risk in the fluid current geopolitical scenario. He also discussed the general issues faced by the businesses such as flights and visa for their Indian employees who want to come back to China. Amid a geopolitical tussle including tensions in technology and trade, with the western countries led by the US, Chinese companies and businesses are facing sanctions on various counts. China has also announced tit for tat sanctions, affecting the whole business environment.

Amid the border tensions in Ladakh, India had tightened regulatory requirements last year for investments from China and banned more than 200 Chinese apps which were considered “prejudicial to sovereignty, security of state and public order”. Also, due to the COVID-19 pandemic, global trade flows have been slowed, although there has still been strong demand for medical equipment and supplies which has largely contributed to China becoming India’s top trade partner in 2020.

World Bank says India’s GDP to grow from 7.5 to 12.5 per cent during current fiscal
Over 6 crore 87 lakh doses of Covid-19 vaccine administered in country so far
Comment