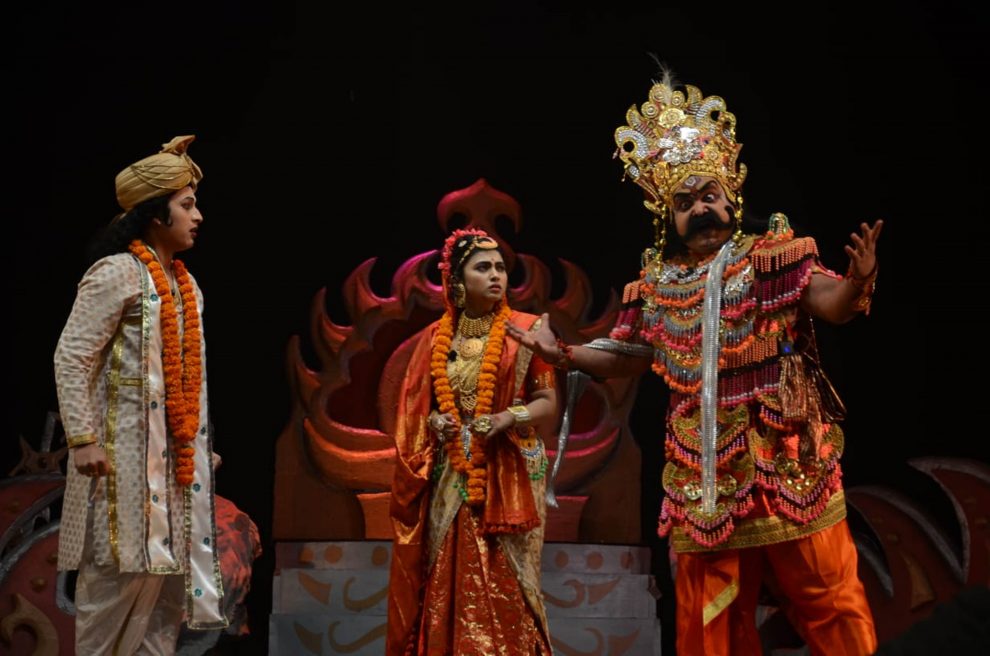 Undeterred by the Covid pandemic, audiences turned up in huge numbers to watch this year’s edition of Sampurna Raas Leela, where the combination of tradition and innovation came into full flow during the year’s two-day festival. As with the previous years, this year too, the husband-wife duo of Basanta Kumar Baruah and Bobby Sarma Baruah successfully organised Raas Leela on December 19 and 20, under the banner of BB Creation in collaboration with the Directorate of Cultural Affairs Department, Government of Assam, on a grand scale at the Srimanta Sankaradeva International Auditorium, of the Sankaradeva Kalakshetra, Guwahati. Entering into its 12th year, BB Creations – the state’s premiere socio-cultural group, has retained much of its vitality in presenting a superbly mounted production, keeping intact the essential values of every other element.

The cultural extravaganza has been an invaluable addition to the city’s cultural calendar that has attracted people from all walks of life since 2009. Being the pioneer in bringing Bhaona in the National and the International arena, Basanta Kumar Baruah, the producer and director of Sampurna Raas Leela and Mancha Bhaona, has been playing a defining role in incorporating and promoting the state’s indigenous tribal communities to perform Raas in tribal dialects. In the course of his journey, he has changed the whole concept of Bhaona, bringing about a cultural revolution. He has been relentlessly carrying forward the very beliefs and ideals of the great saint Srimanta Sankaradeva. Baruah deserves much praise and appreciation for involving different sections of the society, yet, at the same time, preserving the ethics and values of the age old traditions of the Sattriya heritage. It has helped in bridging the gap between the communities and creating inner harmony and strength. BB Creations had assimilated different ethnic communities like the Bodos, the Karbis, the Deuris, the Mishings, the Rabhas, the tea-tribes, and the Nepalis, motivating and providing them with a perfect platform to perform Raas Leela in their own dialects. However, this year, they were unable to assimilate any ethnic group to perform Raas due to the Covid-19 situation in the country. But despite that, the grand spectacle succeeded in arousing audiences interests once again. They also hope to absorb and assimilate all the 26 tribes of Assam into their cultural framework in the future.

The opening day of the Sampurna Rass Leela on December 19 was inaugurated by the President of BB Creation, Himangshu Sekhar Das, the state’s former chief information commissioner in the presence of Prasanta Buzarbaruah, B. Kalyan Chakravarthy, Principal Secretary-Elementary Education, Assam, Dr Jagadish Patgiri, former General Secretary of the Asom Sahitya Sabha, filmmaker Dr Bobby Sarma Baruah, Sudarsan Thakur, Secretary, Kalakshetra Society and other dignitaries, who have showered appreciations on Basanta Kumar Baruah for his contributions towards promoting and propagating the  traditional Sattriya culture. The valedictory day ceremony of Sampurna Raas Leela was inaugurated by the Padmashree, the Akademi Ratna Awardee and well-known Sattriya exponent Jatin Goswami and the Director of Raas Leela, Basanta Kumar Baruah. The show on that day was dedicated in the name of the former Chief Minister of Assam, late Tarun Gogoi. The President of BB Creation, Himangshu Sekhar Das ignited the traditional lamp and paid floral tribute to a newly carved concrete statue of late Tarun Gogoi, which was sculpted by Baruah himself.

In keeping with the tradition, the souvenir – Monikut, was released by Prasanta Buzarbaruah on the eve of the concluding day programme.

The involvement of various popular artistes from film and theatre added much lustre to the two-day event, attracting a number of audiences, who were charmed by the engaging performances of artistes like Aimee Baruah, Atul Pachani, Manmath Baruah, Alakhya Baruah, Padmarag Goswami, Rimjim Sarma, Gayatri Bora, Ashramika Saikia, Debabrat Dutta, Mun Rajib, Jayanta Phukon, Bipul Baruah,  Bijoy Bora, Alish Sheikh, apart from the presence of an enormous wild tusker engaged in a duel with the child Krishna, and a 14 feet high Bakasura gobbling Krishna up, which made the audiences spellbound. The play involved a lot of traditional masks and costumes, which were elegantly designed. The presentation of the Ananta Sashya, Kanshalaya, Nandalaya, killing of Putana, demon Aghasur, Bakasur, Kaliya Nag and the dance of a giant peacock regaled the audiences.

BB Creations’ productions have always distinguished themselves with their extravagantly conceived settings, and this time around too, it was no different. The play also owes its success to the painstaking directorial efforts of Basanta Kumar Baruah, who ensured that his vision was faithfully interpreted. Baruah deserves due credit for audaciously hosting an event that has attracted the cosmopolitan viewers of Guwahati even in this pandemic situation. Actually, everyone forgot about the real scenario, as the audiences felt truly involved in the two-day proceedings.

As informed by Basanta Kumar Baruah, BB Creation is now all set to present the Sampurna Raas Leela in London as soon as things get back to normal.