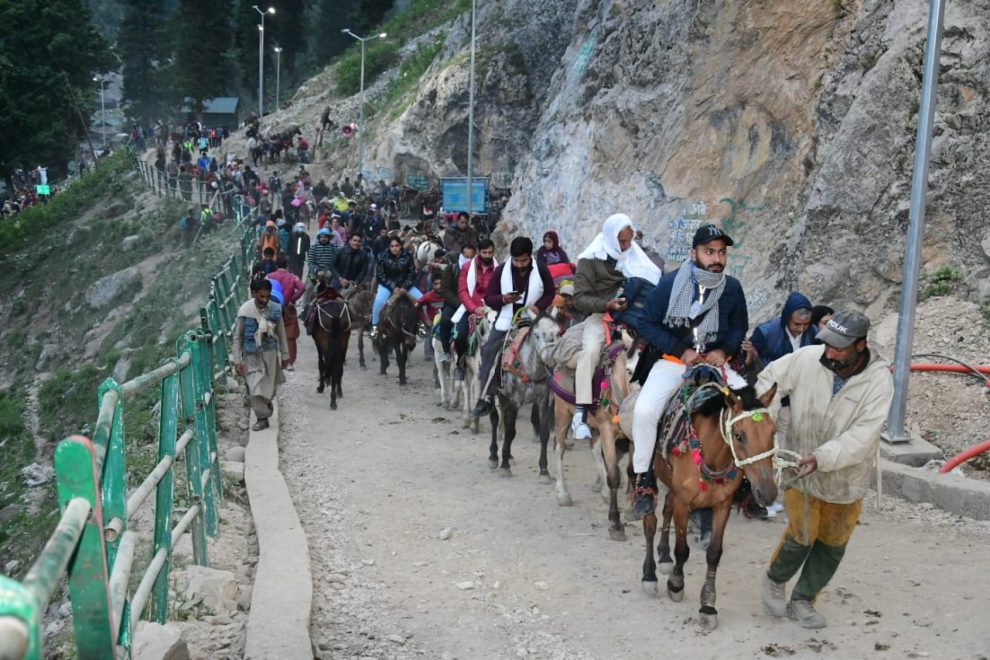 SRINAGAR: As Amarnath Yatra has started after a gap of two years amid high threat, 200 high-powered bulletproof vehicles are placed in sensitive locations along with security forces to detect explosives as well as other tasks to ensure safe and secure pilgrimage.

These vehicles, an official said on request for anonymity, are equipped with a high-powered automatic mapping facility, and the ability to move easily on planes, forests, water as well as places on heights. Besides, the official said, the key specialization of these vehicles is to detect Improvised Explosive Devices (IEDs).

Many of the 200 vehicles have “Deep Penetrating Radar (DPR) to detect IEDs on routes connecting Srinagar and Jammu to Amarnath. “If under attack, these vehicles cannot be damaged from the explosion of IED weighing nearly 25 kg,” claimed the official.

Amid the latest threat inputs regarding the use of grenades, sticky bombs, and IEDs; the security forces have been using these vehicles too along with high-tech gadgets, said the official.

The official said that these vehicles were pressed into Jammu and Kashmir in the last few months considering the 43-day Amarnath Yatra that started on Thursday under high-security arrangements as intelligence reports suggest a high threat to the annual pilgrimage that would culminate on August 11.

Security has also been tightened in Jammu and Kashmir with special emphasis on the use of over 130 sniffer dogs on the vehicle routes heading towards the Amarnath shrine.

Considering threats, over 200 drones are being used on twin routes of Pahalgam and Baltal to keep a tab on each and every activity said the official, adding major threat is suspected from cadres of offshoots of proscribed terrorist organisations such as “The Resistance Front (TRF), People Anti-Fascist Forces (PAFF)”.

The investigation has unearthed a deep-rooted conspiracy of Pakistan-based proscribed terrorist organisations joining hands in form of a united group and shifting their modus operandi by floating pseudo offshoot outfits portrayed as indigenous resistance groups, in whose name terrorist acts are being committed with an intention to claim deniability at the international level.

As per another official, there is an intelligence report regarding the use of sticky bombs of a minimum of half kg and attack of grenades. The official said that the terrorists are learnt to have started gathering at launching pads along the border on the Pakistan side and they are suspected to enter through riverine areas, and tunnels during the Amarnath Yatra pilgrimage which is scheduled to culminate on August 11.

Almost double the companies of all security forces have been deployed in Jammu and Kashmir compared to the previous year for the security of Amarnath Yatra. High-tech gadgets like IED detectors and binoculars are being used “first time” during the annual pilgrimage of Hindus, the official said, adding “these gadgets include some of them manufactured by Israel”.

For the first time, another officer in the CRPF said, an “integrated” effort is being put across all forces concerned including Army, CRPF, Jammu and Kashmir Police, Jammu and Kashmir administration and Amarnathji Shrine Board members. The Amarnath shrine pilgrimage to the 3,880-metre-high cave shrine of Lord Shiva, located in the upper reaches of the Himalayas, is held from the twin routes of Pahalgam and Baltal.

The J&K government had cancelled the annual Amarnath pilgrimage due to the prevailing Covid-19 situation in 2020 and 2021 after a discussion with Amarnathji Shrine Board members. (ANI)