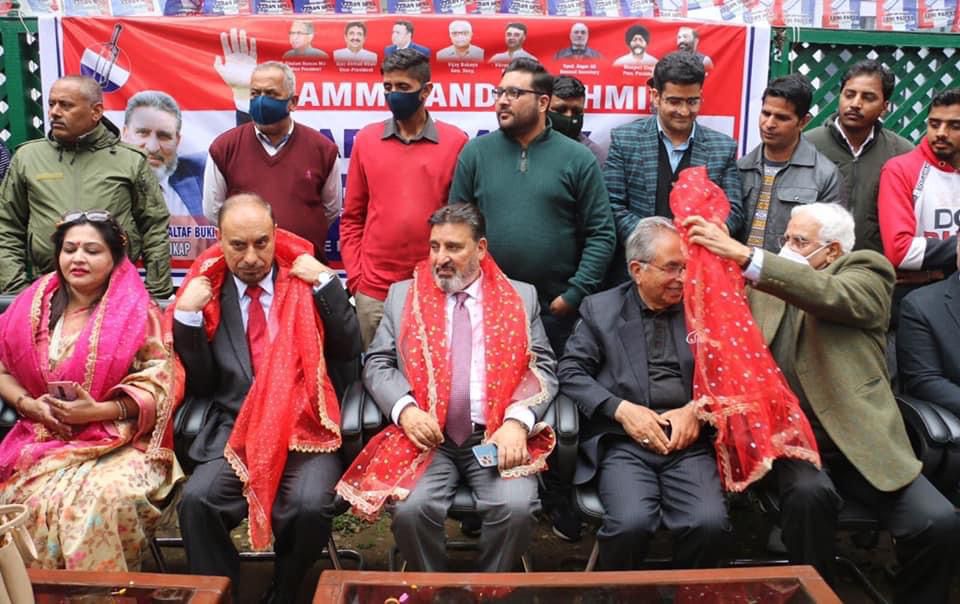 Bukhari was addressing a felicitation programme which was organized at Apni Party Office in Gandhi Nagar.

On this occasion, Namrta Sharma was fecilitated by the Party President on being nominated as State President of Women Wing, Apni Party.

Appreciating the contribution of women in the society, he said that the women should be empowered socially, educationally, economically, and politically in J&K.

He said the Govt should have special provisions for women reservation in Govt jobs in J&K so that they can be empowered.

“Apni Party believes in empowerment of women and if this does not happen, the society cannot develop equally. We must protect and give constitutional rights to the women so that they can be empowered socially, economically, educationally and politically,” he said while addressing the Party leaders and workers.

He said that “Women are one half of the population and hence, their empowerment is essential and crucial for J&K.”

He further said that “Even as the women are empowered at Panchayats, Municipal, BDC, DDC, yet we also believe there is need for reservation of women in the Assembly and Parliament level.”

He said that “We stand with all sections of society equally with no scope of differences or discrmination. The equitable development of both the Regions is important and we will not compromise on it.”

Meanwhile, Namrta Sharma, who was nominated as State President of Party’s Women Wing in J&K, assured that the wing will strengthen the ground level workers in both the regions.

“We will work in all 20 districts and strengthen the party’s roots,” Namrta said while thanking the Party for entrusting their faith.