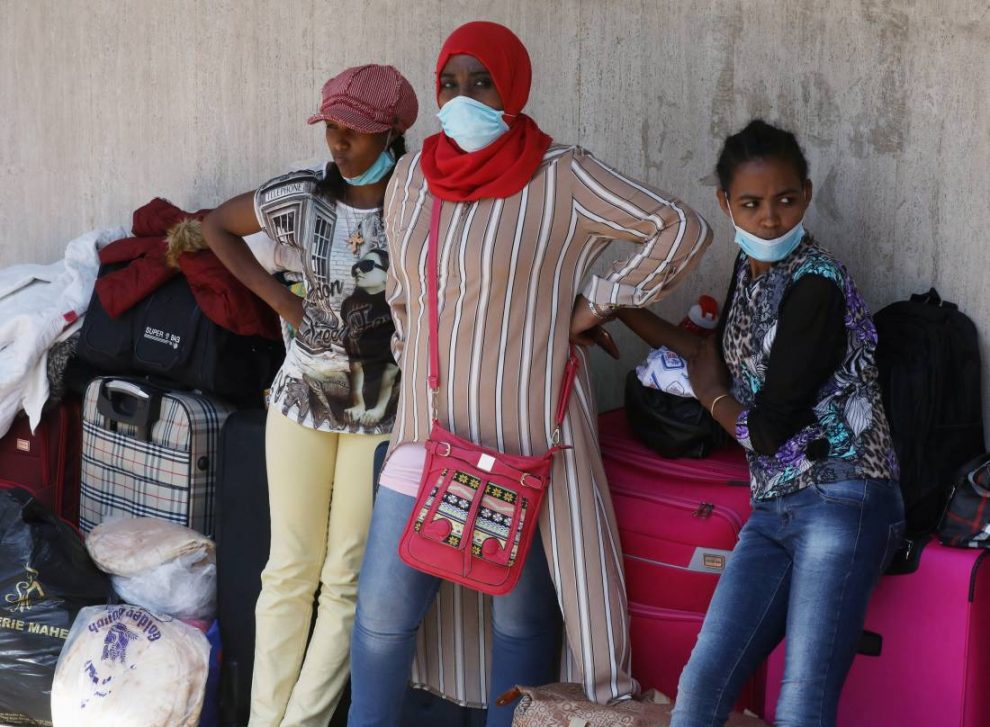 BEIRUT: Exhausted by economic collapse, COVID-19 and an explosion that devastated parts of the capital, Lebanon’s woes are taking a heavy toll on the nation’s mental health – especially among its most vulnerable people.

Increasing numbers of migrant maids are seeking help for conditions such as panic attacks and post-traumatic stress disorder (PTSD) as the crisis worsens the plight of workers trapped in a system akin to modern slavery, charities say.

“It’s so stressful when you think of all the suffering and all of the work and then they say they cannot pay you,” said Regina, a young mother from Sierra Leone who was forced to work for 21 hours a day.

Regina, who asked not to give her full name, has been staying in a shelter since running away from her employer last week with only the clothes she was standing in – penniless because her wages had not been paid for more than three months.

Two migrant domestic workers die on average every week in Lebanon, according to the country’s intelligence agency. Some fall from buildings during escape attempts or in cases that are ruled suicides – often with little investigation.

Things got much worse in April, when the country’s financial crisis deepened just as it went into lockdown, prompting Medecins Sans Frontieres (MSF) – Doctors Without Borders – to set up a medical helpline for migrant workers.

By the end of November, 170 migrant workers had requested mental health support through the helpline, 60% of whom were considered to be in severe psychological distress, said Antonin Guinche, a psychologist at the NGO.

Fifty-four required psychiatric support and about a dozen of them needed hospitalisation, highlighting extreme psychological stress among migrant maids – many of whom come to Lebanon alone when still teenagers, said Guinche.

“(It is) a crucial period of life for a young woman to build her own identity … but all of a sudden they are detached from their families, their origins, their countries.

“Being stuck here alone affects their ability to integrate and all of this is punctuated by violent and traumatic experiences,” he told the Thomson Reuters Foundation.

Lebanon hosts about 250,000 foreign workers who are employed under the country’s kafala sponsorship system, which binds them to one employer and can lead to abuses, human rights groups say.

Many of the migrant maids have reported a heavier workload and increased abuse from employers as lockdown curbs and job losses keep many people at home all day.

A feeling of being trapped, rarely getting paid and being unable to buy basic goods or send money home to their families due to inflation has left an unprotected workforce increasingly vulnerable to psychological problems, charities say.

Some employers have simply abandoned their maids in the streets because they can no longer afford them.

“The main issue with COVID-19 was that lockdowns produced a surge in abuse against migrant workers,” said Sara Ahmaz, a mental health consultant for a number of Lebanese NGOs helping migrant workers.

She said the most common symptoms among abused maids included nightmares, trauma, panic attacks and insomnia.

Sarah, a migrant maid, said she felt trapped and isolated – unable even to tell her family back home about her suffering because she did not want them to worry.

“My mental health is so much more shaken lately,” said Sarah, whose name has been changed to protect her identity because she still lives with her employer.

“They’re always in the house and there is so much more work to do. I want to die. They used to be so nice, but now the economic crisis is affecting them and all of the bitterness is landing on me and they threaten me all the time,” she said.

Sarah has not been paid by for more than two months.

“Nobody cares what you go through,” she said.

In Beirut, thousands of people are thought to have post-traumatic stress disorder since a huge blast leveled parts of the capital in August – among them many migrants from countries such as Ethiopia, Sierra Leone and the Philippines.

Some 24,000 of the 300,000 people who were worst affected by the explosion are refugees and migrant workers who have lost their jobs or homes, according to the International Organisation for Migration.

“Many of the migrant workers now want to go home: they’re traumatised, they’re fed up, they just want their salaries,” Ahmaz said.

For most migrant workers, however, finding enough money to fly home is impossible and they have been calling on their home countries to repatriate them free of charge.

“All of a sudden they’re alone in the street and asking where should I go, and there’s nowhere to go,” said Guinche, from MSF. “They need someone to reassure them, but there’s no one.”

For women like Regina, who left her baby with family back home, the situation is desperate.

“I have my family calling me telling me that they need me to send money home because my baby is sick and needs to go to hospital,” said Regina, who is now considered an illegal immigrant after leaving her employer.

“I have been working so much. I should be able to provide for my family. It’s the only reason I’m here.”