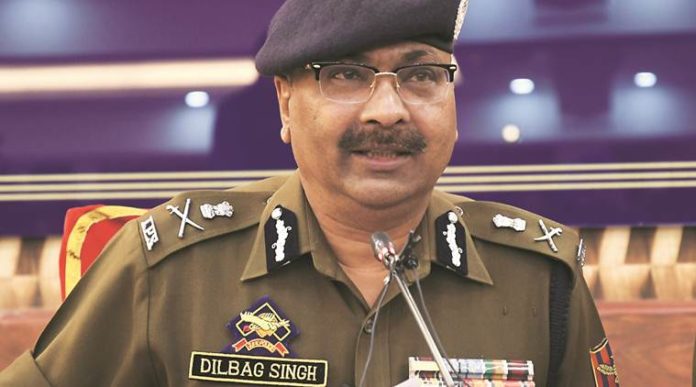 Jammu and Kashmir’s Director General of Police (DGP) Dilbagh Singh said that all the three militants killed in an encounter in Batamaloo area of Srinagar were locals from South Kashmir.

He said this year so far 177 militants were killed in 72 operations across the Valley.

He termed the killing of a 45-year-old woman in “cross firing” as unfortunate.

Addressing a press conference at Police Control Room (PCR) Srinagar, DGP Singh said that early morning, joint teams of police and CRPF while acting on a lead zeroed in on a house where three militants were hiding. “They were given a chance to surrender but they refused and fired. One CRPF officer and another CRPF man sustained injuries in the initial exchange of firing. The officer is critical and we are praying for his recovery,” the DGP Singh said, as per news agency—Kashmir News Observer (KNO).

He said that the forces conducted the operation in a professional manner and killed all three militants. “However, a woman was caught in the cross firing. Her killing is very unfortunate and we express sympathy with the bereaved family,” the DGP Singh said.

About the identification of the three slain militants, the DGP Singh said that all three were local militants from South Kashmir. “Arms and ammunition was recovered from them,” he said.

He said that militants from other districts of South and north Kashmir keep on visiting Srinagar to carry out attacks on security forces. “On August 14, they targeted our party and killed two policemen at Nowgam. Before that, they had killed two BSF men at Pandach on city outskirts. And then they made another attempt at Pantha Chowk where we lost a brave SoG man,” the DGP Singh said as per KNO.

He said police and CRPF teams are alert and whenever they get a lead about presence of militants in Srinagar, efforts are always put in to ensure zero collateral damage. “Today’s operation was seventh one in Srinagar in the recent past, but biggest success was the killing of Hizbul Mujahideen commander Junaid Sehrai,” the J&K Police chief said.

He said that this year so far 177 militants have been killed in 72 operations which include 22 foreign militants as well. He said that Pakistan is trying to float new outfits to create confusion while efforts are being made to revive Al-Badr. “We are aware of this and counter programs and strategies are being adopted,” the DGP Singh said, adding that despite huge efforts by militants and their handlers across, 20 youth who had tread the wrong path returned home.

The DGP termed the assaults on mediamen at encounter sites as unfortunate stating that such things shouldn’t take place. “But at times, during operations, our men have high temper which result in such incidents. I reiterate that media and policemen are each other’s good friends,” he said.

Speaking on the occasion, new IG CRPF Srinagar Sector Charu Sinha said that there is a huge difference between the situation in Naxal areas and Kashmir especially Srinagar. “We will work professionally in collaboration with police and other agencies,” she said.

Newsfeed The Dispatch Staff - September 23, 2020
Madhya Pradesh Minister Narottam Mishra said that the state government will transfer Rs 4,000 into the bank accounts of farmers in...

India a democracy unlike China, govt should listen to Opposition: Adhir Chowdhury

Newsfeed The Dispatch Staff - September 23, 2020
Amid the ongoing Monsoon session of the Parliament, Congress leader Adhir Ranjan Chowdhury on Tuesday hit out at the Centre, stating that...

Newsfeed The Dispatch Staff - September 23, 2020
The Drugs Controller General of India (DCGI) has issued a new set of guidelines, focusing on safety, immunogenicity and efficacy parameters for...

Equitable access of Data is critical aspect for all countries: Piyush Goyal at G20...

Newsfeed The Dispatch Staff - September 23, 2020
Union Commerce and Industry Minister Piyush Goyal on Tuesday emphasised that Data is a potent tool for development and equitable access of...

Jammu & Kashmir The Dispatch Staff - September 23, 2020
The Lok Sabha on Tuesday passed the Jammu and Kashmir Official Languages Bill, 2020 with voice vote, allowing Kashmiri, Dogri and Hindi, apart from the existing Urdu and...

Newsfeed The Dispatch Staff - September 23, 2020
The Indian Navy (IN) is scheduled to undertake a Passage Exercise (PASSEX) with Royal Australian Navy (RAN) in the East Indian Ocean...