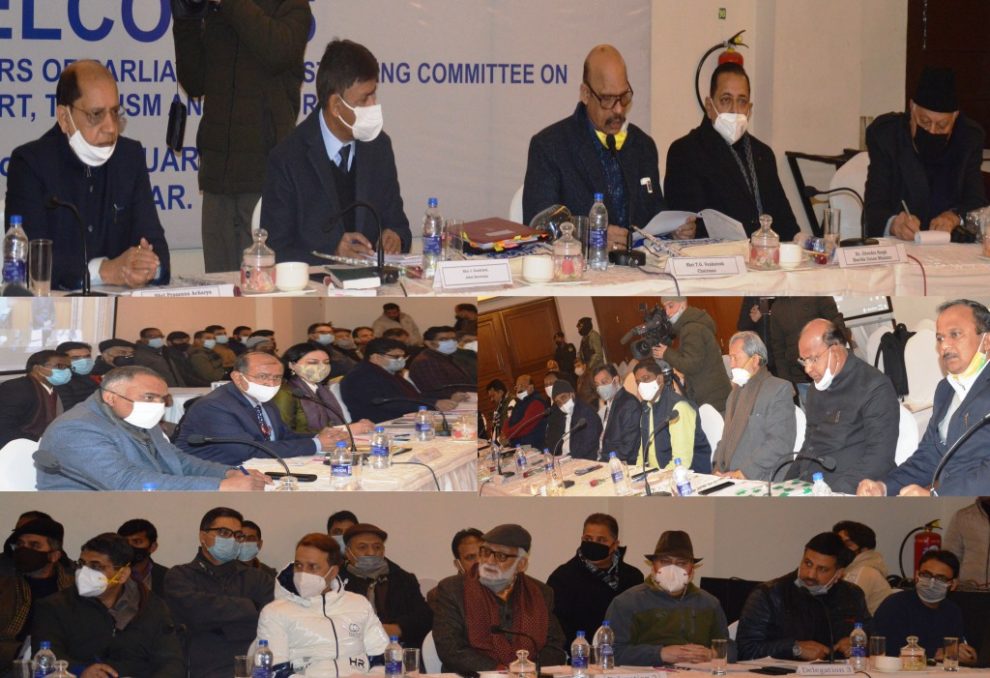 SRINAGAR, JANUARY 21: In a first of its kind visit after the Covid-19 outbreak, a delegation on Parliamentary Standing Committee (PSC) on Transport, Tourism and Culture held a meeting with stakeholders to review and examine the status of Highways/State Highways, potential and promotion of Tourism sector and preservation of archaeological and heritage sites in Jammu and Kashmir here today.

The Committee led by its Chairman, Member of Parliament, Rajya Sabha T.G Venkatesh held threadbare discussion on the development of Road, Railway and Air Connectivity during the meeting.

Speaking on the occasion, Chairman said that the all-round development of UT is a major goal of Government of India. He said the Committee is on a visit to understand the problems of residents of J&K to resolve them.

He said that the committee is here to listen to the stakeholders about constraints specifically being faced by them in these sectors like road transport and what measures are needed to be taken to ensure that the highways in J&K match international best standards and road safety measures being taken in J&K.

The Chairman also said that the Committee shall also take stock of the promotion of Tourism sector vis-à-vis tapping domestic tourism, promotion of rural and adventure tourism, hotel infrastructure and development of highways for better road transport connectivity.

Demanding better road connectivity, the stakeholders apprised the committee about the problems faced by people due to frequent suspension of both road and air connectivity particularly the closure of Srinagar- Jammu Highway during the winter months.

A number of issues and demands were raised by the stakeholders to the Committee like frequent closure of Srinagar- Jammu highway, revival and renovation of houseboats, uninterrupted power supply to hotels, financial packages for artisans, rising unemployment graph due to adversely affected tourism sector, need for a cap on airfare, train connectivity, promotion of tourist destinations, round the clock functioning of Srinagar International Airport, better facilities at the airport, lifting of travel advisories, cultural and adventure sports, medical tourism promotion, preservation of cultural and heritage, enhancement in central government funds, revival and restoration of lakes and other water bodies and better road connectivity across all tourist destinations.

The committee members assured that all the genuine issues shall be taken at appropriate level for resolution.