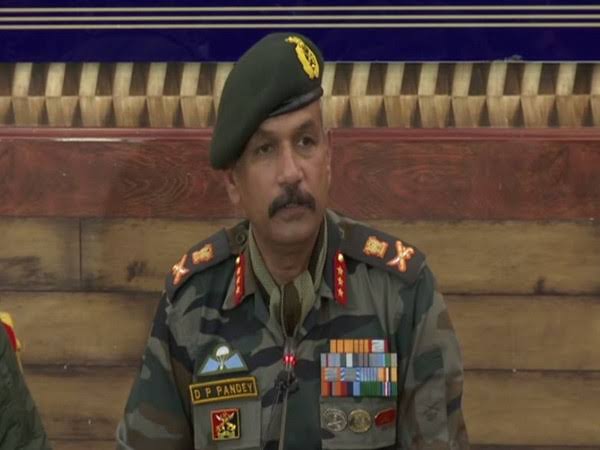 Role of army has started to diminish in Kashmir with extraordinary public outreach of Civil Admin: GoC 15 Crops

KUPWARA: Stating that the situation in Jammu and Kashmir has shown a significant improvement, the Army on Thursday said that “all the parameter of violence have come down by 50 percent” in Kashmir while the number of active militants is 200 but this figure will be further reduced by the end of this year.

The army also said that the role of army is diminishing in Kashmir with the active support of public and civil administration.

This was stated by Lt. General DP Pandey, the General Officer Commanding (GoC) of the Srinagar-based 15 Crops, who was was part of a program organized by the Army in Handwara, Kupwara during which the school being run by the local army unit was renamed as Ashutosh Army Goodwill School (AAGS) at Budkot in memory of the officer who lost life in the line of the duty.

Talking to reporters on the sidelines of the event in Handwara the Lt General DP Pandey as per news agency—Kashmir News Observer (KNO) said that all the parameters of violence in Kashmir have come down by 50 percent and the situation is very good with stability across the valley. “In the rare incidents surfacing these days, some criminally minded people are killing the unarmed security personnel is controlled from across the border and within the valley as well and until then the situation will be disturbed to little extend”, he said.

The GoC 15 Corps said that “I believe people are worried since innocent people and political activists are killed to disrupt the developing peace and development in Kashmir by the enemies of but the way security agencies are working on these incidents hopefully, they will be stopped.”

“In terms of security, the situation is very good and Handwara once used to be a hotbed is now very peaceful with the joint efforts of security agencies and people”, he said.

He said that this occasion is for Ashutosh and the people of Handwara only because the love was there between the officer and people of these areas.

About the presence of foreign militants in north Kashmir, the GoC said that “I would like to convey a small massage and that our neighbour in last few years has aimed to claim in the world platform that the entire process of insurgency and militancy is homegrown. They try to project that there are no foreign militants but all militants who are here in the valley are Pakistani.”

He said: “Evey Pakistani militants killed exposes the agenda of the enemy and they want the youth to be killed so that the relatives, family, and the entire village goes against the country including his friends”, the GoC said. “There is an entire design that is working that is why the citizens of Kashmir must understand that every youth which you are allowing to die because you’re not able to control is leading to further alienation and trouble.”

The GoC said that it is not in their good but in the good of very few people who are running this conflict economy here and are earning because of young boys dying and forced to run to the agenda of Pakistan.

He said: “Our young youth is being used and I will request all the people including the parents, community leaders, civil societies which I have been telling time and again to protect them.”

He also said that: “We have to break this cycle of violence. Killing a militant is not the way but to ensure that our young children should not die rather let the foreign militants die and why are we allowing our children to die for something incorrect.”

To a query related to the fresh ceasefire agreement between the two neighboring countries, the GoC said that the ceasefire has happened as a requirement to ensure that “our population along the LoC remains taken care of and It has come from the request from another side as well but it continued to behave and I am sure the ceasefire will hold but in case anything goes wrong inside then I assure there will be a suitable reaction.”

About the “Army-Awam” engagements and series of programs being organized across the valley, the GoC said that In a recent couple of years, the civil administration has exceptionally reached out to the people of the valley including police, and everyone is functioning as they should function with which the role of the army has started to diminish.

“We were always in support and slowly our role has started to go down but education is important and ensures that we reach out to our people”, he said. “Work is in progress, development is in place and a lot of security issues have been sorted out.”

About the back-to-back attacks in Srinagar in recent days, the GoC said that any “criminally minded person killing an unarmed cant be termed as a militant incident.”