When we discuss organic, only fruits and vegetables come in our mind. Very few people know that even Milk has to be Organic. Around 4 years back, I got a chance to visit a small city in Karnataka where Organic Milk is produced by a group of farmers under the direction and guidance of Dr G N S Reddy who has vast working experience in the dairy sector.

Dr Reddy is the Founder of Akshayakalpa Organic Milk, an Agri based company established around 9 years back at Tiptur Karnataka. He was also founding Managing Director of the company.  Dr Reddy has set up another dairy venture in Mandya district of Karnataka called Farm Connect which is almost similar to Akshayakalpa. 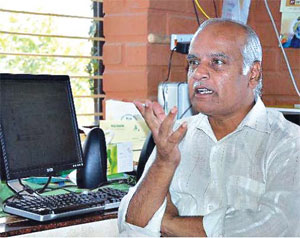 My trip to Akshayakalpa, which means Infinite Possibilities, was facilitated by Mr Vijay Mahajan Founder of BASIX Social Enterprise Group and present CEO of Rajiv Gandhi Foundation. Mr Mahajan is working on the Livelihood generation for last almost 30 years now. BASIX has been working in J&K as well for last several years on skill development under National School Qualification Framework (NSQF) through its subsidiary B-ABLE group. BASIX had plans to involve local youth and budding entrepreneurs towards “Dairy Farming” and for this purpose, Mr Mahajan asked me to visit Tiptur which is a small city located around 150 kms north of Bangalore. Unfortunately, the project got delayed due to political unrest in Jammu & Kashmir, but I am committed to carry forward this mission as soon as possible.

Visit to Tiptur :
Tiptur is located in Tumkur district of Karnataka. People in Tiptur are mainly associated with coconut farming. On 9th September 2016, I visited Tiptur.  After getting down from Railway Station I directly drove to Akshayakalpa office located in the town. Dr Reddy was waiting for me. He gave a detailed presentation to me about the working of Akshayakalpa which was registered as a company only 9 years back, but it has done remarkable work within just 2 to 3 years only and presently it is one of the top organic milk suppliers of South India.  Dr Reddy is himself a trained Veterinarian who worked for 30 long years in BAIF Research Foundation Pune. BAIF was founded by Mahatma Gandhi in the late 1940’s.

While I was travelling towards Tiptur in a train , I was under this impression that Akshayakalpa (AK) might be having a vast dairy farm with huge cows and buffaloes, but when I reached Tiptur that was not the case. I could actually see a totally different concept.  Akshayakalpa does not own any dairy farms. The farms are instead owned by the local farmers who have been organised and are continuously guided by AK’s staff. Akshayakalpa instead owns a 40,000 Litre/day capacity Organic Milk Processing Plant. At this plant, milk is packed and processed after being collected from the farmers working with Akshayakalpa. In September 2016 the plant had a capacity to process mere 7000 litres of milk every day and now it has crossed 40,000 litres mark Dr Reddy told me when I contacted him recently.

Farmers create dairy farms :
After working for 30 years in the social development sector for 30 years, Dr Reddy took voluntary retirement from the post of Vice President in BAIF in 2012. It was in 2012 when he decided to relieve people from funding dependency syndrome. According to Dr Reddy farmers in India have become beggars and there is a need to create new economic cadre. Some working models have to be set up in this direction so that more and more farmers, individuals and entrepreneurs follow the same. He told me during the meeting that farmers have to come out of the dependency syndrome and to achieve this, farming community needs to become self sufficient especially during procurement of seeds, fertilizers, and other things which are needed for agriculture and allied activities that includes Dairy Farming as well. To create dairy farms around Tiptur was not an easy task for Dr Reddy, he had to convince each and every member of the farmers. 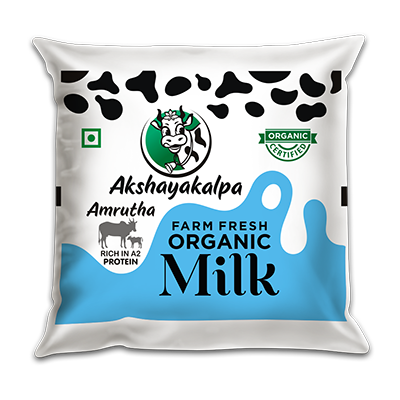 The farmers usually live in villages who have farming land located near the village. The 30 plus dairy farms located around Tiptur in 2016 were located outside villages and Dr Reddy not only motivated farmers to set up the dairy units in their farms but the farmers were motivated to shift their families to these farms as well and this was a great challenge for Dr Reddy. Presently the farmers live inside the premises of these farms. The number of dairy farms has also doubled during last 5 to 6 years.

The dairy units around Tiptur are equipped with all the modern gadgets which can be compared with dairy farms of Europe and US. The farms are self sufficient vis a  vis fodder demand. Not a single dairy farm owner procures fodder from other places. The fodder procurement costs a lot for farmers having dairy farms but this is a totally a different case in Akashaya Kalapa farms. The animals in the dairy farms are not fed with factory made feed.

Organic Fodder :
I found a lot of fodder like Maize, Millets, Gini, Napier, Molegna sticks, Mulberry etc grown within the premises of Akshayakalpa dairy farms. All these varieties of fodder are purely organic. Pesticides or chemical fertilizer is not at all used to grow the same, instead, the organic manure and compost material available within the farm is used as manure. Each farm has its own biogas plant. The gas is not only used by the family living on the farm but the same is used to provides electricity to the farm through a Genset which runs on Bio Gas. The electricity thus produced is used for running water motors, pumps and 500 litre Milk Chilling plant. Cows or buffaloes are usually tied with ropes in dairy farms. They get bruises as the flooring is very much hard, rocky or concrete but this is not at all allowed by Akshayakalpa. The cows roam freely around a piece of land which is fenced. In one of the farms I visited there were around 14 cows, I found around half-acre of land meant for cows to roam. This land was fenced properly. Cows were fed under a shed, having thick rubber sheets which are used as bedding.

Sunil & Vasant’s farms :
The dairy farms controlled by Akshayakalpa are not large farms. Akshayakalpa works with small farmers. The average farm is located on 4 to 5 acres of land. The average strength of cows in these farms is not more than 25. I visited SLR farm located around 8 kms from the Tiptur town. This farm is owned by one Sunil Kumar. Sunil informed me that he established the farm in 2014. His family owned few cows in the village, but Dr Reddy’s concept touched Sunil’s heart and got motivated to establish a modern dairy farm. Sunil has 4.5 acres of land where he takes care of some 16 cows who are the cross breed between Holiestin and local breed. I have been told that today Sunil owns around 25 cows.

At an average, each cow gives 10 litres of milk. Sunil told during my 2016 visit that he earns Rs 70,000 to 80,000 every month by selling the milk to Akshayakalpa. Sunil studied until class 12th only and due to poverty/backwardness he could not continue his education, but today Sunil like other village boys didn’t shift to Bangalore to do petty jobs, instead, he lives in his own village, earns good money, and gives the job to few other villagers at his farm. I went to another farm located some 9 kms from Tiptur at Bamlapur village. The farm is owned by one Vasant Kumar who is graduate. Kumar had 18 cows in the farm. I saw Kumar’s wife Purnimaa a Govt lecturer milking cows. Vasant Kumar like Sunil has also made the dairy farm his home. Vasant lives on the farm along with his two kids, wife and two other employees. Like Sunil,  Vasant also uses modern techniques and machines to milk the cows. I could see a chilling plant, biogas plant and other modern equipment at Vasant’s farm.

Milk Processing Plant :
I also went to Milk Processing Plant owned by Akshayakalpa located around 13 kms from Tiptur town. The plant has been set up on 24 acres of land. There was a team of 15 people in this plant in year 2016 headed by one Jinoth Ram who is Tamilian having done his Masters Degree in Dairy Science. Jinoth was working at Akshayakalpa plant from 2014  and before that, he was working with some other similar plants in Tamil Nadu. The milk processed at Akshayakalpa Milk processing plant is 100 % organic which is supplied to Bangalore and Tumkur towns on a daily basis. High-quality Ghee, Curd and Paneeris also made from the milk in the pant. The milk was sold @ Rs 67 to Rs 70 in retail in Tumkur and Bangalore during 2016 and presently the same is sold @ Rs 80 to 85 per litre. The milk processing plant started its operation with 15 litres of milk that was carried by Dr Reddy in Vagon-R car around 2012, but only within a period of 4 years the supply touched 7000 litres and today this has increased to 40,000 litres per day.

While I was at Sunil’s SLR farm a customer who purchases Akshayakalpa Organic Milk ringed one of the employees of AK who was accompanying me. The customer was on way to the farm to see how organic milk is produced. After some 15 minutes, he came along with his friends and relatives. I interacted with this customer namely Vivek Vinugopal Bhat, a civil engineer from Tumkur. He had lots of praise for Akshayakalpa milk. Vivek told me that for the last 6 months his family buys this organic milk @ Rs 70 from a local dealer in his town. The Akshayakalpa Ghee was sold @ Rs 1000 per Kg in 2016 and is branded as 100 % organic.

Conclusion :
I would request budding entrepreneurs who plan to start their dairy business to establish Organic Dairy farms instead of traditional farms where the cows and buffaloes take fodder which is grown with the help of chemical fertilizers. These chemicals enter into the body of cattle which in-turn contaminates the milk. In organic dairy farms, fodder is grown with the help of organic manure only. I would appeal Department of Animal Husbandry to put a thrust on creating organic dairy farms instead of traditional dairy farms. Unfortunately, most of our cattle in Jammu & Kashmir take fodder that is highly contaminated with chemical fertilizers especially in South Kashmir and other apple producing areas. The fodder available in apple orchards is dangerous as pesticide sprays make it highly infected. This infected fodder enters into the body of milk producing animals which finally contaminates milk as well.