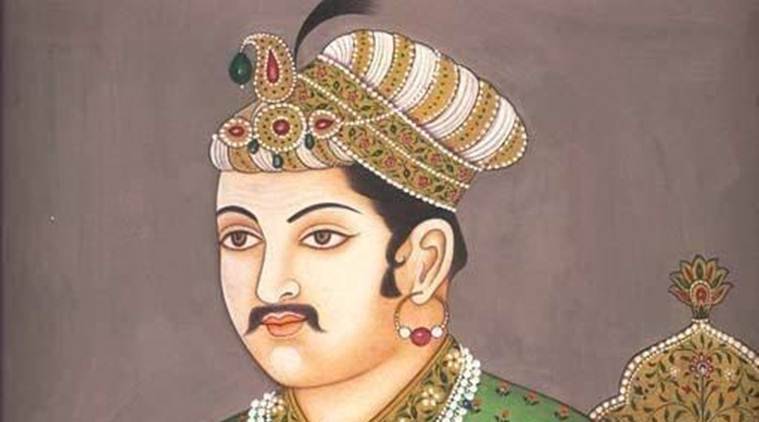 Mid-winter in Kashmir was the season of long nights, ice flurries, and impenetrable high passes. It was a time when men sheltered in the shadows of the great mountains and dreamt of spring. So when Akbar’s army of 5,000 specially-equipped war horses commanded by Raja Bhagwant Das and Shah Quli Mehram marched from Attock along the Pakhli Route through the ravine of Baramullah in December 1585, the forces of the Sultan of Kashmir, Yusuf Shah Chak, were caught unawares. Even so, skirmishing between the two armies was vicious, made even more brutal by the slicing sleet and the lack of provisions. The Kashmir sultan began to push the Mughal army back but he didn’t press home his advantage. This was because the years of diplomacy by the Mughals, in which the Kashmir sultan’s supremacy had been steadily undermined and dissidents supported, meant that Yusuf Shah Chak’s grip on power had been eroded and he was willing to make peace as soon as he received a letter from the Rajput general ominously warning that ‘although this time the royal army was defeated, next time a force thousand times larger than this would be dispatched (against you) and it would be difficult for you to save your life. Therefore,’ continued Bhagwant Das, ‘I suggest to you that it is better for you to proceed with me to the presence of Emperor Akbar.’ The striking of coins and the reciting of the khutba would continue in Akbar’s name, agreed Yusuf Shah, and he also promised to bring his son, Yakub Shah, to Akbar. It was agreed that Yusuf Shah needed only to accompany Bhagwant Das to pay obeisance before the Mughal Padshah before returning to Kashmir.

However, when the Mughal army returned to the imperial court at Attock, Akbar was in no mood for conciliation and disapproved of the treaty which Bhagwant Das had negotiated on his own. He had Yusuf Shah arrested, discomfitting his Rajput general who had brought the Kashmir sultan into Hindustan upon his honour. Bhagwant Das was so mortified by what he perceived as a slur that when Akbar appointed him Governor to Kabul a few months later, he laid down certain conditions regarding the extent of his authority before he would agree to take up office. This, recorded Abu’l Fazl, was perceived as a sort of ‘madness’ by Akbar, who could not countenance any questioning of his decree. Bhagwant Das was detained, and Mirza Daniyal was appointed Governor of Kabul in his stead. Perhaps realizing that he had presumed too much upon the Padshah’s indulgence, Bhagwant Das withdrew his conditions and Akbar reinstated him as governor. However, Bhagwant Das appears to have been deeply troubled by what he would have perceived as a public humiliation. On his way to Kabul, having crossed the Indus, ‘his intellect grew darkened and he became very giddy’ wrote Abu’l Fazl. He was brought back to the imperial camp and placed in care where, to the Padshah’s astonishment and alarm, he tried to kill himself with a dagger. The Padshah sent four of the best physicians at court—Hakim Hasan, Mahadev, Khangar, and Daulat Khan—for the raja’s entourage to choose from and finally it was settled that Mahadev would attend to Bhagwant Das, who slowly recovered.

A second force was sent to Kashmir in June 1586, this time under the command of Qasim Khan Mir Bahr, aided by Haidar Chak, a dissident from the Kashmiri royal family, and now a Mughal commander. The army sent to Kashmir was a massive one, numbering about 50,000 cavalry and up to 100,000 foot soldiers. Conditions on the ground had suddenly become a great deal more congenial for the Mughals, made so by the violent rule of Yakub Chak, son of Yusuf Chak, who had taken over the rule of Kashmir after his father had been arrested. Yakub Chak had aligned with the ulema and had had the popular Sunni leader, Qazi Musa, executed, causing considerable disquiet between Shias and the Sunnis. Having emptied the state coffers fighting the Mughals, Yakub Chak then took to harassing and plundering the local zamindars. He also closed down important roads, fearing Mughal incursions, with the result that people could no longer travel for trade and supplies, leading to resentment and disaffection. As a result, a large number of the disgruntled Kashmiri elite arrived at the Mughal court, asking for help, and were received with satisfaction as well as royal robes and presents by Akbar who had been waiting a long time for just such a moment. The Kashmiri leadership signed a pact which guaranteed religious freedom for Kashmiris, their protection against enslavement and oppression, and the expulsion of those Kashmiri nobles who were deemed mischievous. Consequently, the army marching to Kashmir were given the following strict instructions:

They (Mughal forces) were given directions to show consideration and favour to all people who would come across their way so that they were not forced to abandon their homes.

Faced with defections and disunity, Yakub Chak was unable to resist the combined Mughal–Kashmir army, which marched into Srinagar on 7 October 1586.

As for Raja Bhagwant Das, he would never again be asked to campaign and, from the time of his recovery till his death in 1589, he was put in charge of the royal harem. For the pragmatic Akbar the extreme action of Bhagwant Das appeared profoundly mystifying. As the Jesuits had written of Akbar, ‘He is willing to consult about his affairs, and often takes advice in private from his friends near his person, but the decision, as it ought, always rests with the king’. It was perfectly in order for Akbar to reserve the final decision on the treaty with Kashmir to himself. Moreover, as the Jesuits had noted, Akbar behaved ‘so sternly towards the nobles who are under his proud sway that each one of them believes himself to be regarded not only as a contemptible creature but as the very lowest and meanest of mankind. For instance, these nobles, if they commit offences, are punished more severely and relentlessly than the rest of the people, even those of the meanest degree.’ Given the fact that he censured his generals routinely, it was natural for him to be surprised by Raja Bhagwant Das’s reaction. However, there had been several instances when the actions of Rajput men and women were ascribed to a sort of insanity, a familial malady, by bemused Mughal chroniclers. For the Rajputs, their word and their honour as warriors and chiefs were as unalterable as the rising of the sun. Death, as sung by the Charans, was a far easier alternative to a life without honour. The Bhagwant Das episode, then, was one where the fine balance between the Padshah being the final authority on key matters and the Rajput code of honour was disturbed. However, having exerted his authority, Akbar did everything he could to take care of his courtier.

By giving Bhagwant Das charge of the imperial household Akbar was keeping the raja close at hand, where his well-being could be monitored, while, at the same time giving him one of the highest honours of the land. Only the most trustworthy officers, who enjoyed the Padshah’s complete confidence, were ever given this charge, which included control of the royal bodyguard and the supervision of all provisions and articles required for the comfort and safety of the harem women. On a more personal note, these last years at court would have been deeply satisfying ones for a man who had dedicated his life to the cause of the Mughal Empire. In April 1586, Bhagwant Das’s daughter gave birth to a child, a girl who was named Shah Begum, and Akbar called for celebrations which were unprecedented. Abu’l Fazl tells us that ‘contrary to the usage’, Akbar gathered an assembly to give thanks for the joyful news of the birth of a daughter. A great feast was hosted by Hamida Banu, who had come to court for the occasion, and gifts and money were distributed to all.

That Akbar had specifically ordered grand celebrations for the birth of a girl child was not surprising. His own daughters were raised with a great deal of love and preference, which Salim recalled with something akin to jealousy. ‘Her temperament is greatly inclined to volatility and sharpness,’ wrote Salim about his youngest sister, Aram Banu Begum, born just a few years before his own daughter. ‘My father loved her so much that he politely tolerated her acts of rudeness, and in his blessed sight, since he loved her so much, she did not seem so bad. He often said to me,’ continued Salim, who had clearly found his sister trying, ‘Baba, for my sake, after I’m gone, treat this sister of yours, who is, as the Indians say, my ladla…as I do. Tolerate her coquettishness and overlook her rudeness and impudence.’ Of another of his sisters, Shakr un-Nisa Begum, born after the birth of Daniyal in 1572, Salim notes the particular care Akbar took to keep her close to himself. ‘Since she was brought up in the lap of my exalted father’s care, she turned out very well,’ wrote Salim, ‘good-natured and innately compassionate toward all people.’

As his daughters and granddaughters grew up around him Akbar became increasingly concerned about the plight of girls when they got married and left their families. Criticizing Muslim laws of inheritance which allowed for a smaller share of inheritance to a daughter, Akbar argued that this was inherently faulty, for if a daughter was deemed ‘weaker’, then ‘the weakness of the woman calls for a larger share’, to ensure her own protection. As for the law which allowed a greater share of inheritance to fall to nephews in case a deceased person only had daughters, ‘how could this law be justified’, exclaimed Akbar. In this clear and lucid articulation of his disapproval of Muslim laws of inheritance with regard to girls, Irfan Habib considers Akbar a pioneer and a unique example of a sixteenth-century Muslim monarch wanting to safeguard the rights of girls and women through the reform of laws.

Excerpted with permission from Akbar: The Great Mughal, Ira Mukhoty, Aleph Book Company. Read more about the book here and buy it here.

Join The Dispatch Whatsapp Group to stay updated
The Dispatch is present across a number of social media platforms. Subscribe to our YouTube channel for exciting videos; join us on Facebook, Intagram and Twitter for quick updates and discussions. We are also available on the Telegram. Follow us on Pinterest for thousands of pictures and graphics. We care to respond to text messages on WhatsApp at 8082480136 [No calls accepted]. To contribute an article or pitch a story idea, write to us at [email protected] |Click to know more about The Dispatch, our standards and policies
TagsAkbar Aleph Book Company Ira Mukhoty Mughals