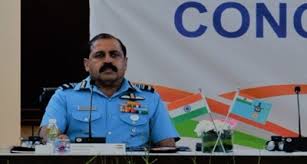 The Chief of the Air Staff Air Marshal RKS Bhadauria has stressed on the need to operate together in times of distress. Speaking at the Chief of Air Staff conclave on the sidelines of the Aero India show in Bengaluru, he noted that technological advances are changing the threat matrix with a noted evolution of air power. Saying that the nature of warfare has significantly changed in the last few years, he noted how armed drones and unmanned aerial vehicles were used in Armenia, Azerbaijan and Syria recently. He said India is closely observing these developments and focusing on developing capabilities in the unmanned and optionally manned platforms.

The Air Chief Marshal informed the members of the conclave that Indian Air Force has developed an integrated air command control system bringing under one umbrella all the networks may be radars or AWACS. He also said that the world’s biggest Electronics Maintenance Management System is put in place to improve surveillance capabilities. He also said that Artificial Intelligence is used to enhance its operational capabilities. He emphasised that a mechanism is required to rapidly identify and handle space based threats.

JNVs to open for physical classes for 10th and 12th in states where schools allowed to open: Education Ministry
Govardhan Yojana will not only make country’s energy sector self-reliant, but also will reduce energy imports of country: Dharmendra Pradhan
Comment