Zainpora Shopian in South Kashmir is considered to be a hotbed of militancy. Every day there are encounters between militants and security forces in this area. The local residents have once again exhibited a great example of communal harmony and brotherhood. On Thursday, July 23rd Muslim neighbors came forward voluntarily to help cremate the dead body of Kant Ram a centenarian Kashmiri Pandit who lived in Zainpora village of the Shopian  district.

When people came to know about the death of Kanat Ram, a large number of Muslim neighbors from Zainpora village and other areas as well thronged Pandit Kant Ram’s residence and consoled the family.

“People were not sure whether Pandit ji died a normal death or he died of COVID-19 as people in such a ripe age are more susceptible to COVID 19 infection, but in spite of all these speculations Muslim neighbors came forward taking due precautions and helped the family to undertake last rites of the deceased as per Kashmiri Brahmin traditions. Muslims were seen collecting and arranging dry wood needed for cremating the body, even many carried the dead body on a charpoy to the cremation site,” said Fayaz  Ahmad a local resident of Zainpora Shopian

This is not a unique case wherein Muslim neighbors have played a proactive role during the death of a Hindu neighbor, but there are dozens of such instances wherein Kashmiri Muslims have come forward to help their Hindu brethren. These incidents are indeed reported in the local media but they don’t get better coverage in the primetime TV debates on Indian news channels. Instead, these channels are busy spreading hatred and venom. 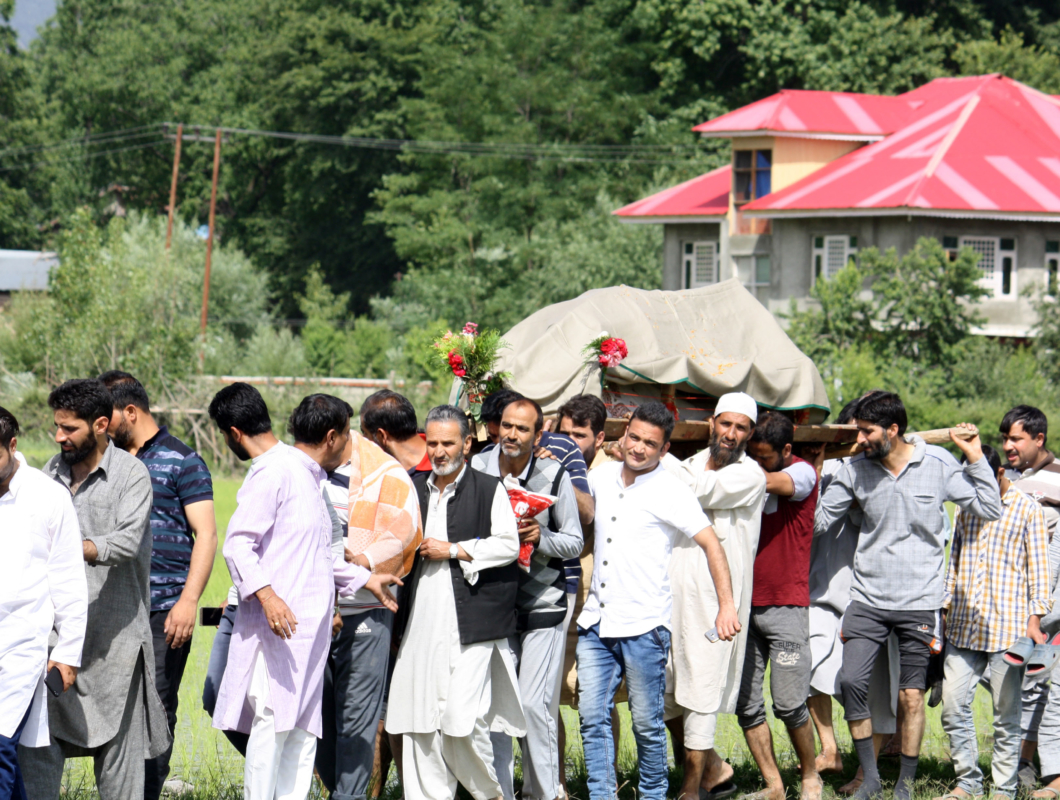 In June this year Muslim neighbors in Kaloosa village of Bandipora district in North Kashmir helped their Kashmiri Pandit neighbor to perform the last rites of a 75-year lady namely Rani Bhat. The Kashmiri Muslim neighbors after coming to know about the sudden demise of Rani came forward and helped the family members to perform the last rites of the deceased. In spite of the COVID 19 pandemic, Muslim neighbors especially women thronged the residence of Moti Lal husband of Rani Bhat and offered their condolences. Rani Bhat lived with her husband Moti Lal 77 in Kaloosa village and this family too had not migrated from the village during the onset of armed struggle in 1990 when most of the Pandits fled Kashmir valley as some of their community leaders had been killed mostly on suspicion of working against Kashmir’s Freedom Movement or were accused of spying (mukhbiri)

Killings of Kashmiri Pandits are being exaggerated by vested interested people in India and abroad and an impression has been created that thousands of Pandits were killed in Kashmir by militants. Even false allegations are made on Muslims having raped pandit women which is absolute rubbish. Unfortunately, nobody knows the reality.

A few years back when I asked a Hindu friend in Delhi, what information he had about the killing of Kashmiri pandits & how many would have been killed from 1990 onwards? His response shocked me, he replied: “ Maybe 10,000 or more?” When I responded to him with facts and figures of the Government and Kashmiri Pandit organization which was available on the internet and Wikipedia as well, he was shocked.

Srinagar based Kashmir Pandit Sangharsh Samiti (KPSS) after carrying out a survey in 2008 and 2009, said that 399 Kashmiri Pandits were killed by Militants from 1990 to 2011 with 75% of them being killed during 1990 alone. The Govt on the other hand claims that 287 Kashmiri Pandits were killed. These details were revealed in the J&K Legislative Assembly as well several years back.

In fact majority of Hindus in India have been made to believe that thousands of Pandits were massacred in Kashmir and hundreds of women raped during 1990’s which is absolutely incorrect.  Even if it is one innocent killing, we must denounce the same. It was very unfortunate to see Kashmiri pandits killed on the basis of ideology and Kashmiri Muslims have always condemned it, but very unfortunately the majority of the Kashmiri Pandit leaders or even most of the Kashmiri Pandits have never condemned the killing of innocent Kashmiri Muslims during the last 30 years. This has further widened the gap between Kashmiri Muslims and Pandits. Pertinently the tiny Kashmiri Hindu minority that lives in valley has never been hurt by their Muslim neighbors and in fact they always have provided them a helping hand always.

More than this Kashmiri Muslims always want their Pandit brethren to come back to the valley. Even Hurriyat leaders, pro-Indian politicians and even militant leadership on many occasions have asked Kashmiri pandits to return back to Kashmir, but the circumstances haven’t allowed them to return back. Their new generation is well settled in Delhi, Mumbai, Pune, Bangalore and many other Indian cities and abroad. They have good jobs as well, so they feel it was useless to go back to Kashmir. On the other hand elderly Kashmiri pandits want to go back to their motherland, but they face lots of challenges especially they are not able to motivate their younger generation on this issue. Even after the revocation of article 370 Kashmiri pandits won’t come back to Kashmir, this is my personal opinion.