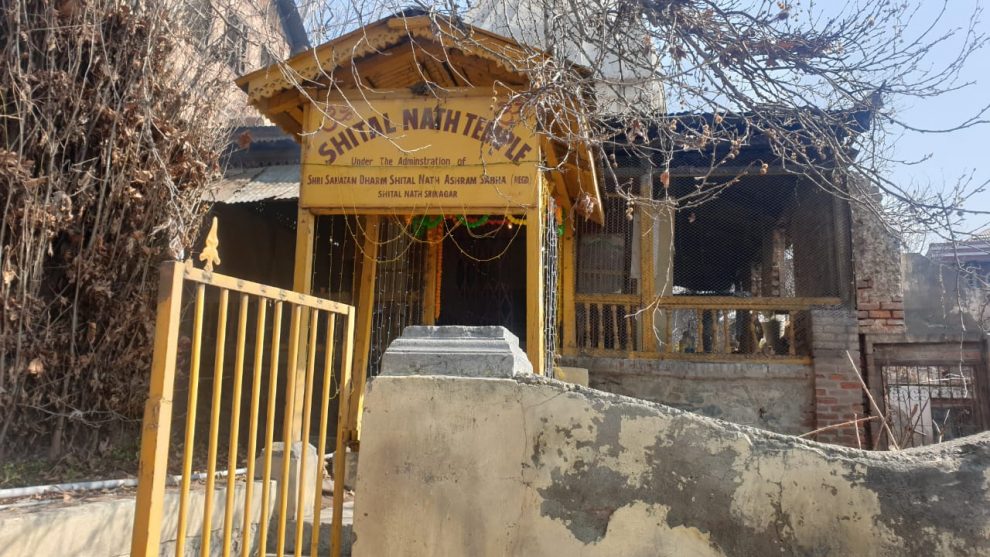 Srinagar, Feb 16: It was after over three decades when Pooja, Hawan was performed at Sheetal Nath temple in Kral Khud area of Srinagar while the Hindus who participated in the religious function credited Muslims for preserving and protecting the temple in the last three decades.

The temple was opened for Pooja on the birth anniversary of Bhairav Nath, who used to live at the particular place.

Interestingly, the temple witnessed religious function at a time when the Hindus across the country celebrated Basant Panchmi. According to the Hindu calendar, Basant Panchami festival falls on the fifth day (Panchami) of the Hindu month of Magha. The festival is usually considered to mark the onset of spring in India.

According to the news agency Ravinder Razdan, who participated in the Pooja said that the temple was opened for Pooja for the first time in over three decades, saying that it is after 31 years that Hindus could perform religious duty here.

“This temple was damaged during the initiation of militancy and was damaged in a fire incident in 1991. The Hawan Shala was also damaged,” he said, adding that they performed the religious duty here like previous times.

“This temple was for 115 families living in the locality. There are Muslims living in the vicinity as well,” Razdan told KNO, adding that it was because of the Muslim community here that this temple and the land adjacent was preserved and protected because this huge chunk of land would otherwise have been grabbed by the land mafia.

“The Muslims always informed us to come and visit this temple as they were protecting this land and religious place from the land mafia since long. Muslims here are our brothers,” he said.

“The government has not provided any compensation to them so far. We are fighting for the cause and we will continue to pitch for its renovation,” he said.

Upendra Handoo, who had come from Jammu, said that it is after 31 years that Basant Panchmi was celebrated at this temple today.

“The Hinuds who wanted to visit this temple were being allowed in all these years, but for the first time after 31 years, we performed Pooja here,” Handoo said, adding that in the year 2011, they take the control of this temple and the Muslims always informed them about the activities of land mafias. “I salute the Muslims here for protecting this temple and land here,” Handoo said, adding that always supported them from time to time.

Meanwhile, the City Mayor, Junaid Azim Mattu also visited the temple today and stated that the Hindu High School along with Shital Nath temple will have beautification and plantation drive.

He said that all the measures would be taken to restore sanctity, its pristine glory and heritage of both the structures and its proper protection at site.

Joint Commissioner Works in this regard have been directed to go for construction of a fountain in the lawns of the school. On the occasion, Mattu was briefed about several other issues by the representatives of Shital Nath Board to which he assured prompt response.

It was also decided that the existing public toilets shall be replaced by new toilets with all modern facilities within the premises of the temple.

The instructions for development of road along with footpaths outside the building were also given on the occasion. Similarly, directions with regard to launching of special sanitation drive in and around the temple and its adjoining areas were also passed to the concerned on the occasion.