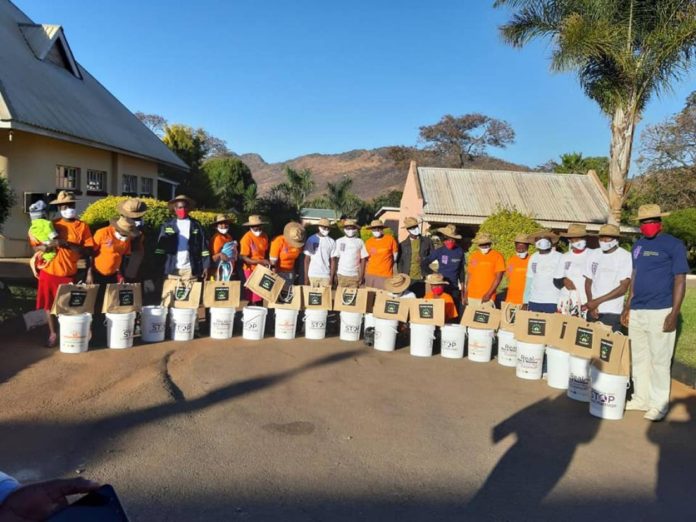 JOHANNESBURG: As a young girl growing up in northern Zimbabwe’s mining community of Mashonaland, Beatrice Savadye watched as her friends were forced into child marriages and early motherhood while many became sick with HIV.

Wanting a different life for herself and other girls, Savadye started the Zimbabwean women’s movement Roots Africa seven years ago fighting for, among many things, legislation change to better protect women’s rights in her region.

Under the lockdown, Savadye is one of a band of female activists in Africa pushing for stronger laws to protect women trapped indoors with abusers from a surge in violence, and also a spike in HIV infections.

“I don’t like seeing injustice. We work to build resilience among young girls, to say that even if you are poor, you can have a better life,” said Savadye, 33, while driving through Bindura, a town in Mashonaland.

The United Nations in June warned of a surge in domestic violence under coronavirus lockdowns, with calls to helplines doubling or tripling in some countries, as restrictions on movement made it impossible for many women to flee abusers.

The Joint United Nations Programme on HIV and AIDS (UNAIDS)highlighted the risk of domestic violence and HIV infection for women and girls in sub-Saharan Africa, who already accounted for 59% of new HIV infections in the region in 2019.

While providing training, rescuing women from abusive homes in her own car, sheltering 30 women and their children and assisting them with antiretroviral (ARV) drugs to prevent full-blown AIDS, Savadye is also pushing for legal changes.

“It is painful to become an adult at a young age. Young girls need role models to look up to, safe spaces to run to, and laws to protect them,” said Savadye.

In 2016 Roots Africa helped push for a constitutional court judgment that led to a ban of child marriage in Zimbabwe.

Savadye meets regularly with traditional leaders to make sure this legal protection translates into reality, particularly during the pandemic.

“We have seen an increase in child marriages during the lockdown as economic meltdown is one of the key drivers of child marriage and exploitation,” Savadye told the Thomson Reuters Foundation.

She is now pushing for a review of the Zimbabwean Termination of Pregnancy Act to fully legalise abortion.

Currently it is only legal if the mother or child’s health is at risk or the mother can prove she was raped, said Savadye.

“We are fighting against backstreet abortions,” she said, adding that she also has to help women access ARV medication secretly so that controlling partners in denial of their status won’t banish them from taking the pills. Across the border from Zimbabwe, Roots Africa’s efforts are echoed by the South African women’s rights charity Ilitha Labantu, that means bringing a sunbeam of hope to the people in a local isiXhosa language.

“Violence against women has been a pandemic for a long time,” said the charity’s director, Ella Mangisa, 37.

“We fight against the normalisation of gender-based violence,” she said from her office in Gugulethu, a township in South Africa’s Western Cape province.

During the lockdown, the organisation saw a spike in women fleeing abusive partners.

“The Domestic Violence Act says a women should be offered a place of safety if she is abused. But why must she run around like a headless chicken looking for this safety?” Mangisa asked.

“The perpetrator should be removed from the house, not the other way around,” she said, adding her organisation submitted a suggested amendment for the act to government during lockdown.

“Laws and how they are enacted will better help women access justice,” Mangisa said.

Further east in southern Africa, 25-year-old Malawian activist Grace Ngulube has used her own experience of being born with HIV to educate and help women at risk of getting the virus.

“I faced many challenges such as stigma and denial. Little by little I became more confident to help others,” said Ngulube from her home in the city of Blantyre.

Ngulube’s organisation, the National Association of Young People Living with HIV, organised support groups before the pandemic hit for youth living with HIV, educating them on their health rights and assisting them with accessing medication.

But when schools closed and movement was restricted, Ngulube heard reports of a rise in sexual violence against women and girls as well as teenage pregnancies.

Using Whatsapp to stay in touch with as many girls as she could, Ngulube also began meeting community leaders to ensure child marriages did not occur, even though they are illegal.

“There are laws, but we are pushing for them to be enforced,” she said, adding that young girls with HIV were stigmatised for having low immune systems and labelled as potential corona carriers.

“This is why we need civic education,” Ngulube said.

But Savadye in Zimbabwe said she was concerned education campaigns ran the risk of being drowned out by COVID-19.

“With all efforts focused on fighting the coronavirus, we cannot forget about HIV, malaria, child marriages and gender-based violence,” said Savadye, who often takes her 3-year-old son to her awareness workshops.

“I want him to be an ally to women one day, in a society where men and women can thrive with dignity. Whatever work we do now contributes to that dream.”