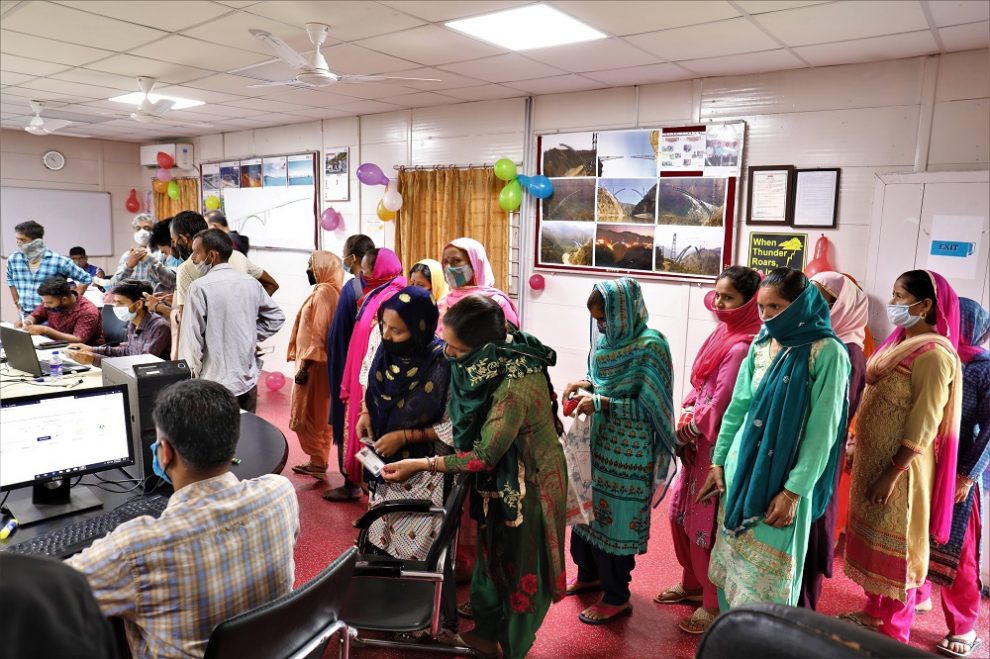 Reasi (Jammu and Kashmir): Over 200 villagers from Kauri in the Reasi district of Jammu & Kashmir, where the world’s highest railway bridge is being constructed, received their first jabs of COVID-19 vaccine on 16th June.

In an initiative led by Afcons, who are constructing the Chenab Railway Bridge, nearly 700 vaccine doses were administered under the supervision of the Reasi District Hospital medical staff. The vaccination camp was conducted for the 18-45 age group as the interim paucity of vaccines temporarily halted the center’s mass vaccination drive.

Speaking about the initiative, Mr. SM Viswamurthy, Afcons’ The project Manager for the Chenab Railway Bridge project, said, “The stringency of lockdowns is gradually reducing across the country, and it is possible that operations will resume to near normal as much as possible. But to ensure that the normalcy is not impacted again by the pandemic, we undertook the vaccination drive. We are happy to be able to invite nearby communities for the vaccination in the drive to extend our support in fight against this pandemic. The villagers appreciated the initiative undertaken by the company and turned up for the vaccination in large numbers.”

“Close to 700 vaccines were administered 16th June from which over 200 locals benefitted. We’re expecting similar or a greater number of locals to participate when we organize another vaccine camp at Bakkal,” Mr. Viswamurthy added.

Appreciating the initiative, Kabul Singh, a shopkeeper in Kauri, said, “We didn’t expect this vaccine camp at Kauri, and the villagers were really happy when Afcons informed and invited us for the jabs. We are extremely satisfied and hope they will organize the second dose for us, too.”

Mushtaq Ahmad, a local villager, thanked the officials for the vaccination drive stating how important it was for the youngsters and the women in the village to receive the vaccine. “We are grateful that the vaccination was done in such a seamless manner. The men, women and youngsters of the village got their first jabs and now they can move out with the knowledge that they have some protection against the virus. All of us participated wholeheartedly and it was a blessing for us.”

Afcons Infrastructure Limited is a construction and engineering company headquartered in Mumbai and part of Shapoorji Pallonji (SP) Group which has a legacy of over 150 years. Afcons has projects in over 22 countries and is one of India’s fastest-growing infrastructure company. The company has launched a massive vaccination drive to safeguard its employees, their families, workers, and locals in their respective regions both in India and overseas.

“It is an Afcons’ culture to grow with the communities wherever we work and taking that legacy forward, we are happy to extend the facility of COVID-19 vaccines to the nearby communities. We’re hopeful that the entire Reasi district of J&K will transform into a major tourist hub once the Chenab Bridge is ready and operational. We thank the local residents for their active participation in making this humble initiative successful and encouraging,” Mr. Viswamurthy said.