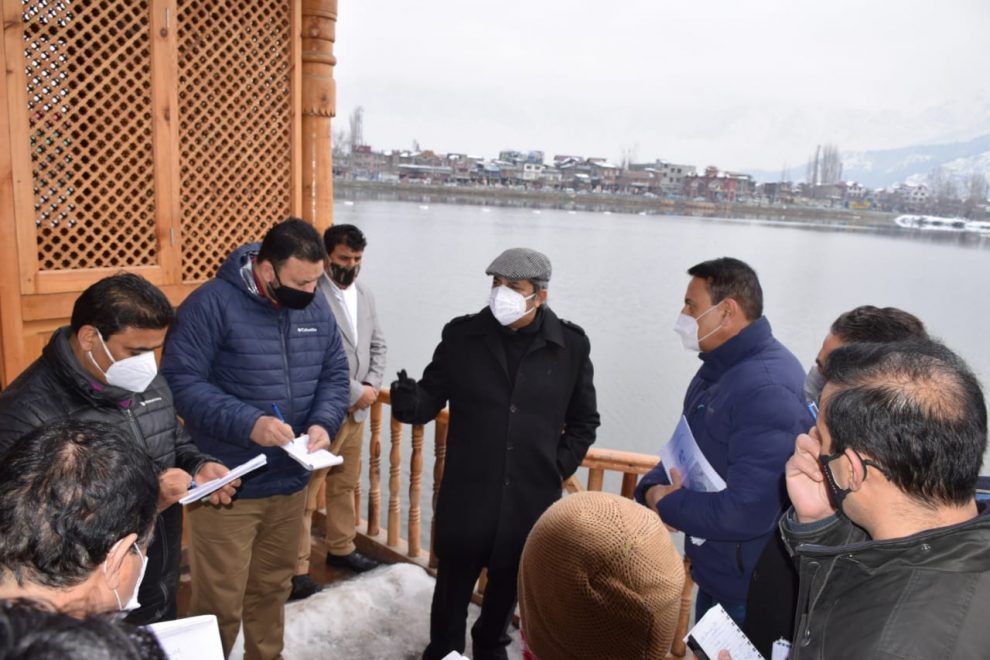 SRINAGAR, JANUARY 25: Advisor to Lieutenant Governor, Baseer Ahmad Khan, on Monday conducted an extensive city tour and visited several tourist destinations in Srinagar to assess development works being executed there for enhancing utilities for the visitors.

Advisor Khan visited Peerzoo where he inspected newly inducted jetties and functionality of water transport down the Jhelum river course. He asked the R & B department to clear the debris from the river at Habba Kadal which has narrowed the width of the river course.

Advisor, during his visit to Baba Demb lagoon, took stock of installation of fountains and other related utilities being raised for beautification of the spot. He directed the concerned officer to introduce boats in the lagoon and start water sports. He was informed that an amount of Rs 8.25 crore has been spent on development of Flea Market, Food Street, Kiosks in Flea Market, Pathway, Retaining Wall, Lighting, Solid Waste Management, Parking Lot and tourist benches at Baba Demb, so far.

Enroute, Advisor visited Nigeen Club where he was briefed about the activities, footfall of tourists, maintenance of garden and other related issues.

At Royal Springs Golf Course Cheshmashahi, Advisor had a brief about the development works being executed there during the current season. He was told that  an amount of Rs 4.10 crore has been utilized for different development works and work on installation of sensor lights, water lift pump, construction of foot path and macadamization of roads inside the Royal Spring Golf Course (RSGC) has been  completed besides six battery operated golf carts have been procured for the RSGC.

During the visit, Advisor was informed that Rs 450 lakh has been spent on development of Shikara Ghats by DTK.

Meanwhile, Advisor visited several other tourist spots where he inspected the status of several ongoing works.

Advisor was accompanied by Divisional Commissioner Kashmir, P K Pole, Director Tourism and other officers during the tour.

Later, Advisor khan met several delegations and individuals at Civil Secretariat Srinagar and listened to their issues and concerns. He assured them that their genuine issues will be addressed at the earliest.