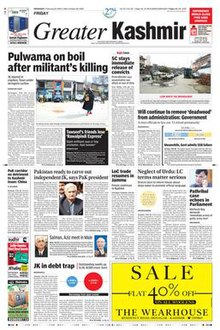 SRINAGAR: Jammu and Kashmir government on Friday released the advertisement to the leading English daily Greater Kashmir after a gap of 476 days.

Well-placed sources said that the government has decided to release the advertisement on a daily basis, which was stopped by the higher authorities in January 2021.

“The government has directed the Department of Information to immediately release the advertisements to the top seller daily newspapers from today,” sources confirmed.  Pertinently, the government had stopped advertising to the English daily Greater Kashmir and Urdu daily Kashmir Uzma on January 15 2021. (KDC)

Infiltration is drastically down, yet currently there are 200 terrorists staged across border ready to be launched into J&K: Northern army commander
In a first, Jammu City gets 17 Smart Anganwadis
Comment