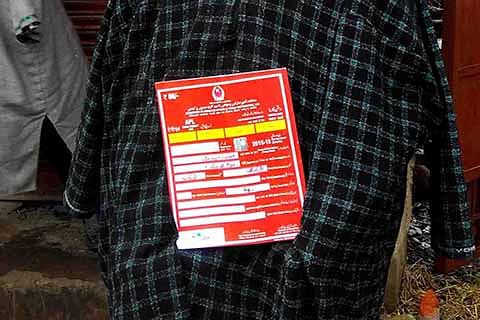 SRINAGAR: Directorate of Food Civil Supplies and Consumer Affairs Kashmir, on Wednesday, advised the AAY/ PHH beneficiaries to voluntarily surrender their ration tickets issued in their favour within 15 days.

In an official statement issued by the Directorate of Food Civil Supplies and Consumer Affairs Kashmir which reads that after the NFSA was implemented in the Union Territory of Jammu and Kashmir in the year 2016, two categories of households viz AAY & PHH were registered for receiving ration on highly subsidized rates on the basis of being poorest of poor and poor respectively.

“Whereas, since the implementation of NFSA the economic condition of many households has improved either through acquiring of Government Job or through other means rendering them ineligible for receiving subsidized ration under AAY/ PHH categories.

“In view of above all such families/ households/ ration ticket holders whose financial position has improved rendering them ineligible for receiving ration under the above-mentioned categories are hereby advised to voluntarily surrender their ration tickets issued in their favor under AAY/ PHH categories within 15 days,” the statement reads.

Meanwhile, Director FCS&CA Kashmir told that the statement has been issued by the department after they observed that the beneficiaries who are placed under AAY/ PHH categories in 2016, in many of the cases the economic situation of the households has improved.

“We have advised them to surrender their ration cards if they are still availing the facility which is meant for the poor and the poorest section of the society,” he said. “We have asked to surrender the ration cards voluntarily to those who have got employment or whose economical condition has improved so that the facility can be given to the needy section of the society,” he said—(KNO)