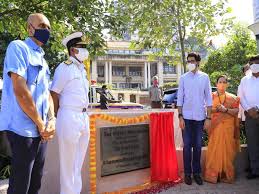 Informing about the inauguration of the monument, Thackeray tweeted, “Words aren’t enough to describe the feeling as I unveiled the Sea Harrier monument of the Indian Navy at Bandra Bandstand today. Thank you Asif Zakaria ji for this initiative that will remind us of the valour of the uniform and inspire many more to join them.”
As per an official release, the monument showcases the Indian Navy’s aviation capabilities as also keeping the legacy of INS Viraat alive from whose deck the aircraft operated.

“Built by the British Aerospace, the Indian Navy became only the second country to fly the Sea Harrier when it was inducted in 1983. The aircraft operated from the deck of INS Viraat. The aircraft was a Short Take-Off and Vertical Landing/Vertical Take-Off and Landing (STOVL/ VTOL) jet fighter, reconnaissance and attack aircraft,” the release said.

Notably, the aircraft formed part of the INAS 300 squadron popularly known as “White Tigers” whose legacy is being continued by the latest MIG 29 K fighters onboard INS Vikramaditya.
“Dedication of this monument to the citizens of Mumbai is a reassurance of devotion and commitment of Indian Navy towards safeguarding our maritime boundaries,” it added.