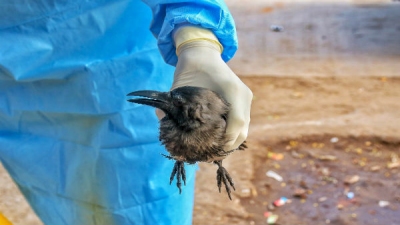 Government has said that additional cases of avian influenza among crows have been confirmed in Dangs district of Gujarat today. Animal Husbandry and Dairying Ministry said, after successfully finishing the culling operations, Maharashtra and Madhya Pradesh have completed sanitization activities. In Haryana, samples from four poultry farms have been confirmed to be positive for avian influenza (H5N8).

The central teams formed for monitoring the situation in the affected areas of the country are visiting the affected sites and conducting epistemological studies. The Department of Animal husbandry and Dairying requested the Ministry of Civil Aviation to allow uninterrupted transportation of samples for expeditious testing of Avian Influenza in designated laboratories.

The Ministry said, in the light of the findings that many states were banning supply of poultry and poultry products from other states, it was suggested to review such policy as this will add to the negative impact on the poultry industry. It said, consumption of well-cooked chicken and eggs does not pose any risk to humans. The Ministry said, there is no scientific report available that infection of Avian Influenza viruses spread through processed products.

In view of the reports from designated laboratory that samples of commercial poultry from Ghazipur Mandi, Delhi were negative for Avian Influenza, Minister for Fisheries, Animal Husbandry and Dairying Giriraj Singh emphasized on removing the ban on sale of poultry and poultry products in a virtual meeting today along with the Deputy Chief Minister Manish Sisodia and Mayors of MCD Delhi. The Delhi Government has revoked this with immediate effect. Following advisories from Centre, states are generating awareness among the general public about Avian Influenza and how to deal with the situation.