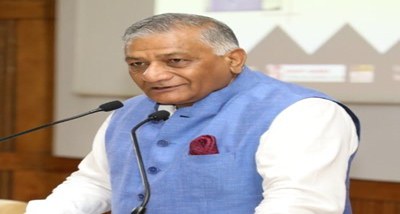 Union Minister General VK Singh has said the actual farmers are welcoming the recent three central legislations on agriculture. He interacted with farmers in Thanjavur in Tamil Nadu yesterday to explain about the various features of the legislation. Ahead of the Kisan Sammelan, he told reporters that the ongoing farmers’ agitations are politically motivated. He said the NDA Government is committed to ensure the welfare of the farmers. He reiterated that the Minimum Support Price mechanism will continue and that the contract farming is intended to benefit the farmers. He said they are now freed from the mandis to sell their products anywhere in the country.

Later, the minister tweeted saying, one can feel that farmers are excited about the laws brought by the Narendra Modi government and that the historic reforms were long over due. He charged the opposition with being adamant on misleading the farmers about the legislation.