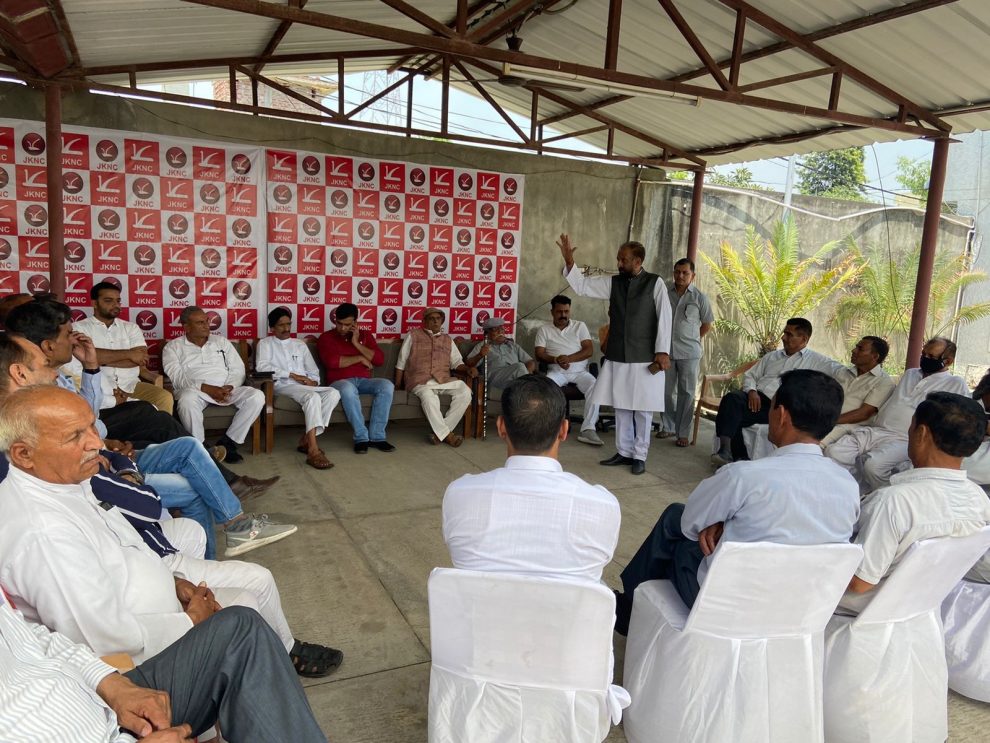 Samba: While describing delimitation report as discriminatory, senior National Conference leaders said at a meeting here that removal of Article 370 has brought heavy losses to Jammu and Kashmir.
A meeting of the national conference was organised by Block President of Samba district at Samba which was presided by Saudagar Gupta , District President, Samba and Chief guest was Mohinder Singh, Vice President, Jammu Province.
Speakers in the meeting criticized the final report of the Delimitation Commission.
The political scenario in Samba district, especially the newly created three constituencies were discussed at length.
Speaking on the occasion Saudagar Gupta, District President stressed upon the workers to strengthen the party at grassroot level,so that fruitful results can be achieved in the upcoming elections.He also clarified among party ranks ,files and workers that the party mandate will be decided at an appropriate time by the parliamentary board of JKNC and any confusion created in the matter is to be ignored.He also urged the workers to create and promote an atmosphere of communal harmony among different communities and groups in order to achieve good results.He also stressed upon that present Government is only full of hollow slogans and has achieved nothing for the local population,the prices of common goods as well as LPG,petrol have increased beyond means of normal middle class and no steps are being taken to provide relief to the common masses
While speaking on the occasion Shri Mohinder Singh ,Vice- president ,JKNC ,Jammu stressed that the abrogation of article 370 and 35 a ,has created heavy losses for the local businesses and the UT administration has shown no support for the affected businesses ,and no policy framework has been devised in this regard which has created losses for the businesses as well as increased unemployment.He said that there is no authentic proposal regarding the regularisation of daily rated workers and urged the LG govt to kindly absorb the local unemployed youth in centre sponsored projects especially in the non-technical fields ,which can be done easily in newly created AIIMS ,Vijaypur ,IIT ,IIM and Central universities.He also urged the central Government to restore statehood for the state of J&K and empower the locals before the elections.Singh also criticised the LG as well as central government on the recent matter of selective killings of Hindus in Kashmir ,he said that the centre has failed repeatedly in providing protection and safety to settled Kashmiri pandits despite assurances and the situation has never been more grim than today.
Among others that spoke on the occasion included Shri Balbir Singh ,Ajay Sharma,Rajeshwar Singh,Riyaz Malik ,Hasandeen ,Ravi Sharma ,Kartar Singh,Bua Ditta ,Haji Shafi,Satpal , Joginder Sharma ,Bahadur Singh ,Major Singh ,Chain Singh ,Pooran Chand ,Romesh Singh ,Soorat Singh,Ram Lal ,Yashpal Sharma,Ravinder Jasrotia.