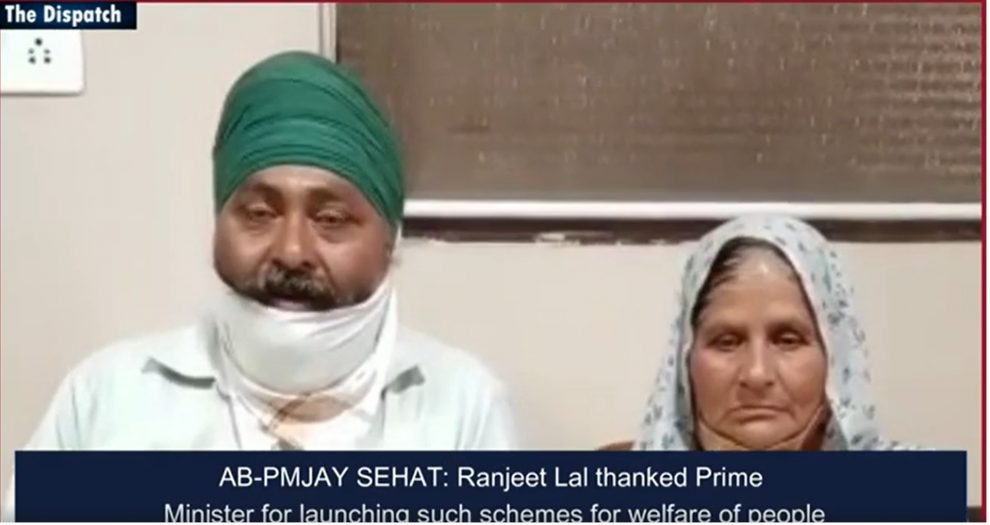 “Golden card has become a ray of hope for people with weak financial background. I am a farmer and was diagnosed with cardiac issues,” Ganesh Kumar resident of Teshil Samba said.

He added with the help of a golden card, he received free medical treatment at Super Speciality Hospital in Jammu.

“The doctors placed two stents to relive my heart ailments. This treatment is very expensive and I cannot afford,” he said.

He added that this is only possible due to golden card. He also PM Modi and LG Manoj Sinha for launching such people centric schemes.

He also urged other people to get register for Ayushman Bharat Pradhan Mantri Jan Arogya Yojana (AB-PMJAY) SEHAT and reap the benefits.

Another patient, Ranjeet Lal, who was admitted in Shri Om Hospital said that he has received free medical treatment for three days.

“I thank Prime Minister for launching such schemes for welfare of people,” Rajneet Lal said.

It is pertinent to mention here that Ayushman Bharat, a flagship scheme of the Government of India, was launched to achieve the vision of Universal Health Coverage (UHC). The SEHAT scheme was launched in convergence with Ayushman Bharat Pradhan Mantri Jan Arogya Yojana (AB-PMJAY) with the objective to provide better health care facilities to the people of Jammu and Kashmir.

It covers medical procedures including oncology, cardiology, nephrology etc, and up to three days of pre-hospitalization and 15 days post-hospitalization expenses like diagnostics and medicines are also included in the scheme.

The Jammu and Kashmir figures amongst the top five States/UTs with highest number of Ayushman Cards generated.

The health department is continuously organising registration drives and encourages people to come forward and get registered for AB-PMJAY SEHAT to avail benefits of the scheme.