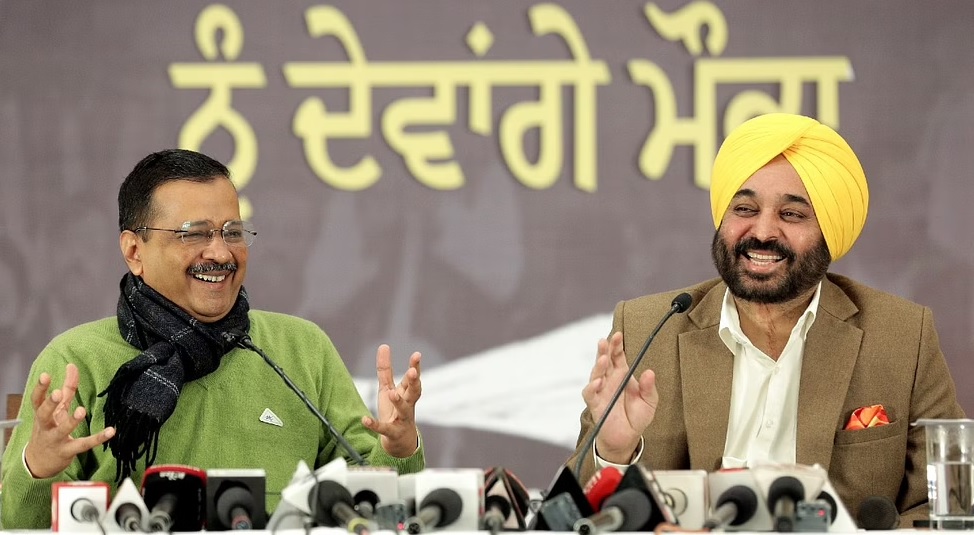 Chandigarh: The Aam Aadmi Party appeared to be heading for a clean sweep in Punjab having taken a lead in 88 of the 117 assembly seats after initial rounds of counting of votes on Thursday, with Chief Minister Charanjit Singh Channi, SAD patriarch Parkash Singh Badal and former CM Amarinder Singh among the heavyweights who were trailing.
The Congress was leading in 13 seats, SAD in eight, BJP five and BSP two, according to trends available at 10:30 am. An Independent candidate was ahead in one seat.

The early trends indicated that the ruling Congress has been decimated in Punjab while the SAD, which contested the polls in alliance with the BSP, has failed to make much impact.

Chief Minister Charanjit Singh Channi and majority of his ministers were trailing.

As the trends started showing a clear lead to AAP, which made an impact in all the three regions — Malwa, Majha and Doaba — party workers burst into celebrations.

“The people of the state had faced a lot of problems during previous regimes and had pinned hopes on AAP,” he said, adding that a new beginning for Punjab has started and state will become prosperous now.

Targeting the Congress and the BJP, he said, “These parties never talked of welfare of common people.”

The trends are showing an overwhelming majority for our party and it shows that the people of Punjab have reposed faith in the Delhi Model of governance, Sukhwinder Singh, an AAP supporter, said in Dhuri.

Lakhwinder, another AAP supporter, was seen dancing to the beats of dhols in Kharar constituency.

“Those parties which until yesterday were questioning the exit poll surveys which showed clear majority to AAP will have no face to show now, he said, while distributing sweets to other supporters.

Among those who were trailing in early trends included Chief Minister Charanjit Singh Channi. Channi is trailing from his seat Chamakur Sahib, from where he is sitting MLA as well as Bhadaur, the second seat from where he had entered the fray.

SAD president Sukhbir Singh Badal was also behind in his Jalalabad seat by a margin of over 2,000 votes over his nearest rival and AAP candidate Jagdeep Kamboj.

Counting of votes for 117 assembly seats in Punjab began on Thursday amid tight security arrangements.

According to data available on the Election Commission website at 10:30 am, in Lambi, former chief minister and sitting MLA Parkash Singh Badal was trailing behind his nearest AAP rival Gurmeet Singh Khudian by a margin of 3,103 votes.

In Patiala Urban, where Punjab Lok Congress chief and former CM Amarinder Singh is the sitting MLA, AAP candidate Ajit Pal Singh Kohli was leading by a margin of 7,767 votes.

Sidhu is the sitting MLA from Amritsar East.

Punjab Finance Minister and Congress leader Manpreet Singh Badal was trailing over his nearest AAP rival Jagroop Singh Gill from Bathinda Urban by a margin of over 9,931 votes.

From Pathankot, Punjab BJP chief Ashwani Sharma was leading over his nearest Congress rival and sitting MLA Amit Vij by a margin of over 2,500 votes.