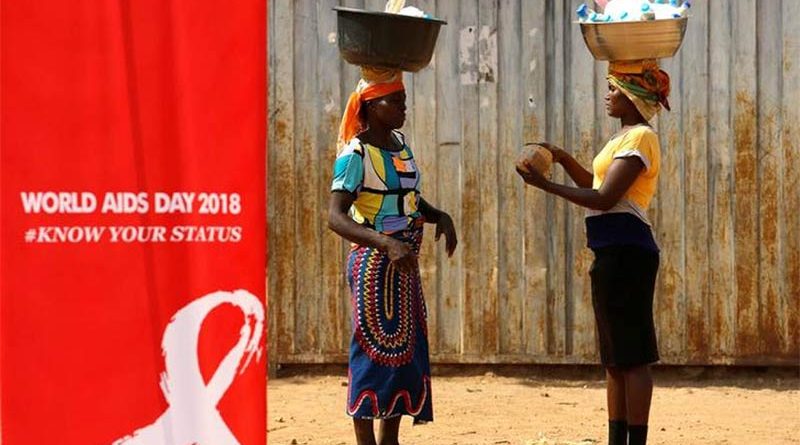 NAIROBI: Kenyan sex worker Silvia does not much like the large, oblong-shaped blue pill she takes with her porridge every morning.

While the daily tablets of pre-exposure prophylaxis (PrEP) drastically cut her risk of getting HIV, they bring with it stigma and even violence due to the common misconception that the drug is taken by people who already have the virus.

“I was beaten up by a client who found the pills in my handbag. He thought I had AIDS and accused me of giving it to him and hit me on the head with bar stool. I ended up in hospital with a blood clot,” said Silvia, 23.

“It’s a problem. People are ignorant about the drug. I don’t want to get AIDS, but the pill is a problem … if there is a better way to protect myself I would welcome it,” she told the Thomson Reuters Foundation, asking not to give her full name.

As World AIDS Day is marked on Tuesday, Silvia and thousands of other African women seeking a discreet, longer-lasting way to protect themselves from HIV may not have to wait much longer.

HIV/AIDS experts have described the results as ground-breaking, especially for Africa – where new infections disproportionately affect women – and more options to prevent HIV are urgently needed.

Not only will the new drug give women and girls across the region a more acceptable option, new transmissions will fall sharply, they said.

“If donors and countries invest in rolling out access of injectable PrEP to women at higher risk of HIV, new infections could be dramatically reduced.”

BURDEN OF THE PILL

More than 38 million people worldwide are currently infected with HIV, and the AIDS pandemic has killed about 33 million people since it began in the 1980s.

Women and girls accounted for 48% of the 1.7 million new HIV infections globally in 2019, according to UNAIDS, the Joint United Nations programme on HIV/AIDS.

In sub-Saharan Africa, however, they accounted for 59% of new cases.

Health experts attribute the higher rate among women and girls in Africa to deep gender inequalities, which often leave them more vulnerable to sexual violence and exploitation.

While most countries in sub-Saharan Africa provide PrEP free of charge to those most at risk of HIV – such as sex workers and people with an HIV-positive partner – many vulnerable women and girls do not know about the drug or cannot access it.

Studies also show that many women and girls find it difficult to keep up with PrEP due to its daily dosage and the discrimination they fear if anyone finds out they are taking it.

“Many women can’t always use a condom or the PrEP pill. Men often will refuse to put on the condom … and the pill brings stigma and sometimes violence as most people think it is used to treat AIDS and not prevent it,” Mutonyi said.

“It is a burden for sex workers especially who are highly mobile and have to carry the pills with them as they may stay overnight somewhere. They always have to hide it from clients, as well as from their friends and family.”

The single shot every two months would not only be more private, she said, but also more convenient as patients currently have to go monthly to selected public clinics – often far from where they live – to collect their medication.

The trial by The HIV Prevention Trials Network enrolled more than 3,200 women aged between 18 and 45 who were at high risk of contracting HIV in Botswana, Kenya, Malawi, South Africa, Eswatini, Uganda and Zimbabwe.

Four HIV infections occurred among women who were given the cabotegravir shot, while there were 34 HIV infections among those taking the daily Truvada pills.

With the risk of HIV found to be nine-times lower with cabotegravir injections than with daily oral PrEP, the trial -expected to continue until 2022 – was wrapped up ahead of schedule in May.

Lizzy Nkosi, health minister of the small landlocked nation of Eswatini – which has the world’s highest HIV/AIDS rate with more than 27% of the adult population living with the virus, said the study’s results were revolutionary.

“As a country with a heavy burden, we are humbled and grateful for this development. It gives us hope that our goal of an HIV-free generation now seems attainable,” Nkosi said.

“It is definitely a game-changer. Women will have an option they can use without relying on their sexual partners cooperation and approval. An injection is discreet and eliminates the stigma associated with taking pills.”

For Silvia, the new drug can not come soon enough.

“If this injectable drug comes to Kenya, then it will help a lot of women and girls … they are more likely to take medication to protect themselves from AIDS,” she said.

“A shot will reduce the burden. A shot can end the stigma.”

Prakash Javadekar says, there has been decrease in corruption due to steps taken by NDA govt
EAM S Jaishankar holds virtual conversation with Foreign Minister of Dominican Republic
Comment