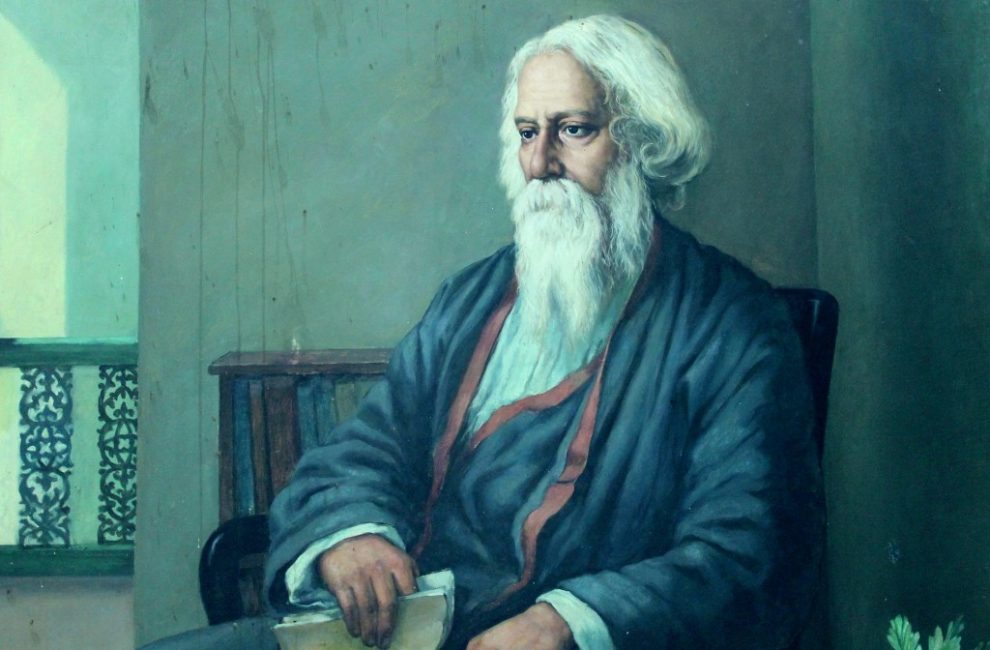 What we know today as the Santiniketan ashram was originally an empty spot deep in the interior of the district of Birbhum in the Rarh area of rural southern Bengal. It was inhabited by very old Hindu, Muslim, and Tribal villages that had links with the adjoining Santal Parganas. Shortly after establishing the Santiniketan ashram, Debendranath registered a trust deed to provide for its funding in the future. The trust included provisions for an annual village fair and for a school. This was the school that Rabindranath started in 1901 on moving with his family from Selidaha to Santiniketan. Two decades later, he added an international university to it for the study of the cultures of the East and the West. He named the university Visva-Bharati (World Learning). Its doors were thrown open to men and women from everywhere to collaborate in intellectual companionship and social action. Social action included a programme of rural reconstruction in the decaying villages surrounding the Santiniketan school. It was for that purpose that an institute of rural reconstruction was started at a village within two miles of the Santiniketan school and named ‘Sriniketan’, an abode of beauty.

The steady decay of the villages from the late 19th century was mainly due to the migration of the newly English-educated Indian elite from the villages to the city. This elite were men who were qualified in the professions and preferred to leave their ancestral villages for jobs or independent practice in the city. This was a big change for the villages, because the tradition over the ages had been that the landed gentry did all the welfare work for their poor tenant farmers. They were the traditional ‘guardians’ to whom the charge of their village was handed down from generation to generation. They arranged for all the necessities, whether it was to do with excavating the tanks or building the temples. Society had mandated that the wealthy and the upper castes would have to spend their wealth for the needs of the society. It was only after fulfilling those obligations to the needy that the ‘guardians’ could spend their wealth as they wished. This was how the overall responsibility for the well-being of the villagers belonged to the elite.

While this societal arrangement had provided the village people with their basic physical needs, it had at the same time stripped them of their self-reliance, and indeed, any sense of atmashakti. They remained complacent over their miserable state of life. They ascribed their miseries to their inborn karma. They blissfully convinced themselves that there was no escape from their suffering. Rabindranath recalled some of this mentality among the villagers when he wrote:

In my estate the river was far away and lack of water was a serious problem. I said to my tenants, ‘If you dig a well, I shall get it cemented’. Their reaction was plain and simple. ‘You want to fry fish in the oil of the fish itself. If you dig the well you will go to heaven through the accumulated virtue of having provided the thirsty with water whereas we shall have done the work.’ Their idea, obviously, was that an account of all such deeds was kept in heaven and while I, having earned great merit, could go to the seventh heaven, the village people would just get some water.

The consequences inevitably were a further widening of the social and economic gap between town and country, city and village. The villagers lived in a perpetual muddle. They were without a clue about what was expected of them. They had no notion about what it was to live with responsibility and self-respect. It was no surprise, therefore, that the villages went into decline in the course of time. Cholera and malaria became virulent in village after village and the springs of happiness dried up. Rabindranath felt determined to intervene in that decline, in spite of his limited resources.

He knew well that a civilization that comprises of only village life could not be sustained in the modern age. ‘Rustic was a synonym for the mind’s narrowness’, he wrote. He sought, therefore, to bring the village and the city close by means of an endeavour to combine traditional knowledge with scientific experiment. In modern times, the city had become the repository of the ‘new’ knowledge. Rabindranath had the prescience to believe that it was essential for the village to cooperate with the city, in order to access the new knowledge. His study of ‘other agricultural countries’ had shown how land in those countries had been made to yield twice or thrice by the use of science. In Sriniketan, as in his agricultural estates earlier, he attempted to introduce the latest techniques to improve cultivation, including the use of farm machinery. A motor tractor was bought for Sriniketan in 1927, as recorded in the institute’s Minute Book for 1922–32. He wrote with great expectation, ‘If we can possess the science that gives power to this age, we may yet win, we may yet live.’

The other important goal for Sriniketan was to organize the villages so that they could supply all their needs on a cooperative basis. The idea was that, given education, the villagers would be able to establish and maintain their own schools and granaries, their banks and cooperative stores. It was thought that the ties of cooperation would unite the village people and free them from dependence on the ‘city’ and the ‘government’. That would also be the self-respecting way of resolving the issue of alienation between the common people and the upper classes. Rabindranath’s intervention was to bring about this much-needed change for his society’s self-respect. By change in this regard, he meant, first and foremost, a change of attitude. He thus wrote, ‘It is not enough to try to remove wants; you can never remove them completely from outside; the far greater thing is to rouse the will of the people to remove their own wants.’

Rabindranath abhorred the contempt of the Bengali intelligentsia for the masses. They regarded the common people as chhotolok, literally, people of low class. With extreme sarcasm he asked, how could the common people be anything other than lowly, given that their own high society never felt any compassion for them? With deep disappointment Rabindranath wrote, ‘There have been many a movement among our common people, but that remains unknown to our students. They do not want to know because it does not fetch them pass marks in examinations.’ He ridiculed the Bengali college student who studied economics and ethnology with their European teachers in order to learn of the customs and laws of their very own village next door.

Excerpted with permission from A History of Sriniketan: Rabindranath Tagore’s Pioneering Work in Rural Reconstruction, Uma Das Gupta, Niyogi Books. Read more about the book here and buy it here.

“Half-Blood”: This debut novel is about dysfunctional families, plucky survivors, and good-hearted rogues
In this forthright memoir, 1961 batch IAS officer and former Delhi LG Tejendra Khanna writes about his distinguished career as a civil servant
Comment