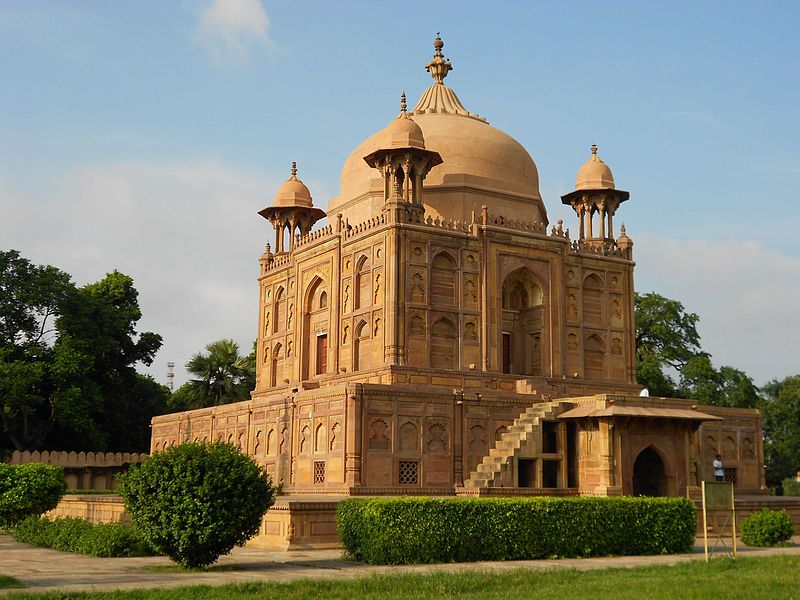 Allahabad is an easy find on a world map. Kings and queens bypassed it for centuries. The Pururava broke ground in the north; the Delhi Sultanate in the northwest. The Mauryas and the Guptas stayed 60 kilometres away. It was the Mughal ruler Akbar who settled here in the sixteenth century. He built the fort and the markets, the port and the gardens. Under his tutelage, a new story braided with the status quo. The locals spun him a revealing origin: Akbar, the Hindu hermit reborn as the ‘Mussalman king’. The king, in return, gave the city a new name: Ilahabad, from the Arabic ‘ila’ or ‘ilaha’ for ‘the supreme power’, cognate with the lexicon of the Puranas. From a measly settlement to a bustling metropolis, Prayagraj became Ilahabad.

I returned to the city, one in 150 million. From atop the Shastri Bridge, I took in the hustle and bustle on the riverbanks. Pontoon bridges rested over the rivulets. Rusted electricity poles jutted out from the earth. Canvas tents with hollowed bamboo spines lined the loam in neat files. It was the year of the Kumbh Mela, the largest congregation of people in the world.

New designs were spread all over the canvas of the city. Freeways rode over Lukerganj and Kydganj. The impossible had happened: the roads were broader, traffic lights changed colours! A family of apartment complexes, standing tall over a short city, competed for greater heights. I heard that a new airport was operational. Among the more general developments, however, a different story was taking shape (over and above the mayor’s forewarning).

Boundary walls, bridges, and trees were painted in cartoonish Hindu motifs. A yogi in saffron robes danced holding onto his ash-smeared locks; Lakshmi and Ganesh adorned the twin pillars of an underpass. The shops in Civil Lines had identical vermilion red facades. Most glaringly, the Bharadwaj Ashram, hidden for decades in a narrow gully, was embellished with a multi-storeyed effigy of the legendary muni. It looked as if it had leapt out from the murals—it sported the same beard, rudraksh, austere clothes and the deadpan stare of serious religion. Faith had a new look—colour-coded banners, consistent images. What were they hiding?

Along with the Ganga and Yamuna, the invisible Saraswati rounds off the holy confluence of the rivers. Crossing the Subhash chauraha one day, I noticed an odd traffic sign. It was in five languages—Hindi, English, Bangla, Tamil, Telugu, but no Urdu—and it marked the way to another city: Saraswati Hi-Tech City. In the winter of 2016, the Uttar Pradesh State Industrial Authority had broken ground on a new township. Saraswati was planned with ‘state of the art infrastructure like Exhibition Centre, Multiplexes, Mega Malls’. Using government ‘buyouts’, 1,115 acres of farming land had been fenced in. Late winter crops ripen early spring. The farmers had managed a new year’s harvest by the time bulldozers arrived.

As I followed the signage to Saraswati, I came across another construction site. On the purlieus of the rivers, steamrollers were levelling fields for the ashram of Maharishi Mahesh Yogi. Mounds of earth and brick awaited assembly. When the sun hit this Hindu monument, right outside its shadow was a monument of ‘smart’ development.

I was getting close.

I returned to the riverbeds a few days later. A family friend had invited me to visit his ‘tent city’: a lodging complex for pilgrims. He was one of the hundreds of private developers with tender bids to develop the Kumbh township. It was time to visit the Mela.

My last Mela had been twelve years ago, when I still lived in Allahabad. I remember staying in a tent with Baba for two months. My cousins and I would make balls out of the river loam. In the nights, we’d go into one of the camps to gawk at a Naga baba or to watch a play. We’d gulp down jalebis and kachauris at our favourite roadside halwai. On our way back, we’d stop by the Shaktiman weighing machines and keep score. Indeed, Allahabad had come back in my life as an object of study. I had planned for an uneventful return—arrive, write something neat, leave. Instead, a year had gone by and the knife of memory had only cut deeper. The city resisted easy theorizing. The more I had gotten to know, the more there was to discover.

At the tent city where my friend had invited me, I was first shown the premium residences: the private cottages. Taking over most of the complex, the 200 sq. ft. tents were a kitchen short of a 1-BHK. In second place were the private rooms. Larger in size, the four-bedders came with toilets and were ‘ideal for joint families’. Cordoned off to the side and accessible by a path of least visibility were three large halls with single beds set evenly apart. The dormitories, I learnt, are the main lodging. But you know how it is. My friend had another concern—how to keep the dormitory guests from using the dining area? If the guests won’t eat together, I joked, will they bathe together? For this, I discovered, a solution was at hand. A private waterway had been arranged.

Following the tour, I headed to the fabled most luxurious tent city: Indraprastham. Advertised as the ‘primest’ real estate of the Hindu cosmopolis, the ‘city of eternity’ had tents starting from `30,000 per night! I had to see it for myself. The entrance was fittingly royal—a towering red archway with pulleys to raise the portcullis. If religion was a sport, and Kumbh its World Cup, these were the corporate boxes. I was denied entry—PRIVATE ENTRANCE ONLY.

It was my visit to the Mela premises that finally made it clear.

In the Disneyland of Hinduism, corporations had rebranded faith as a thrill ride, and the fundamentalists made sure you rode the damn thing. Belief could no longer be trusted. It didn’t compute. You had to wear its garments, listen to its beats, gawk at its images (customizable to your liking and budget). You could pay to jump the queue. If you didn’t, who were you and what were you doing here? Because whoever you are, you don’t belong.

A traffic light turns red to signal a stop. The choice of colour isn’t random. Red is the colour our eyes are programmed to notice. Driving back from the Mela, the changes that had once confounded me were finally coming into focus. The wall art and the statues, like dog piss, were marking territory. And, like the temple that shadows the takeover of farmland, they were the perfect alibi for corporate coup à la Smart City. Everywhere I looked, I was grabbed by ‘things’ that weren’t there a year ago. Different shades of red, as if the city were on fire.

Excerpted with permission from A for Prayagraj: A Short Biography of Allahabad, Udbhav Agarwal, Aleph Book Company. Read more about the book here and buy it here.

The Dispatch is present across a number of social media platforms. Subscribe to our YouTube channel for exciting videos; join us on Facebook, Intagram and Twitter for quick updates and discussions. We are also available on the Telegram. Follow us on Pinterest for thousands of pictures and graphics. We care to respond to text messages on WhatsApp at 8082480136 [No calls accepted]. To contribute an article or pitch a story idea, write to us at [email protected] |Click to know more about The Dispatch, our standards and policies
TagsA for Prayagraj Aleph Book Company Non-Fiction Udbhav Agarwal

“Forgiveness Is A Choice”: Kia Scherr’s book is a tender and understanding guide on getting a grip and taking life one day at a time
“Your Next Self”: This inspiriting self-help book motivates readers to live a life full of enthusiasm, fulfilment, and abundance
Comment