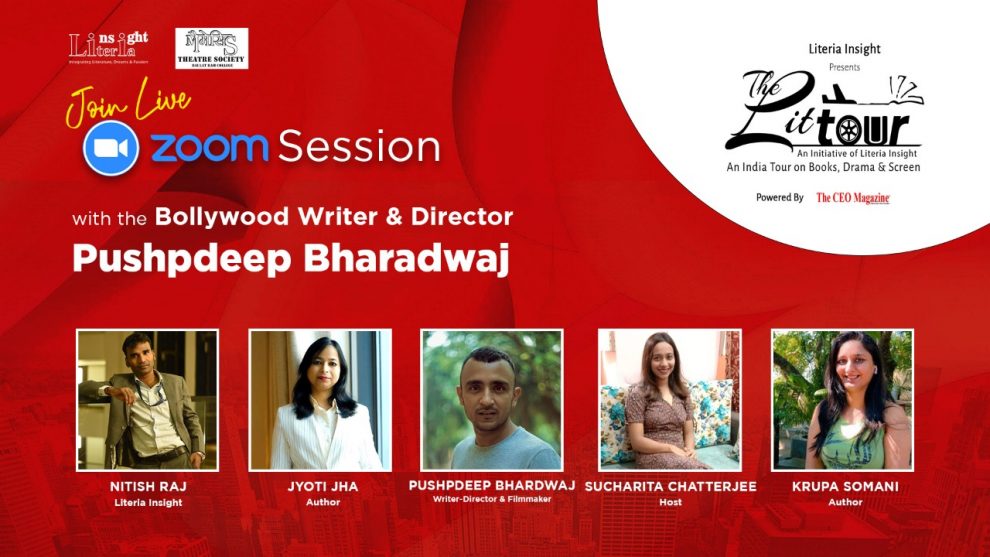 The young minds of the Memesis Theatre Society, Daulat Ram College; University of Delhi had all the reasons to cheer when they got an opportunity to interact with the celebrated ‘Ranjish Hi Sahi’ fame Writer-Director, Pushpdeep Bhardwaj during his esteemed presence under The LIT Tour initiative by Literia Insight where writers meet directors and discuss the nuances of Books, Drama & Screen.

An Indian Film Director having worked predominantly in Bollywood, Pushpdeep Bhardwaj is also a Screenplay Writer. Graduating from NIFT Mumbai in Fashion Communication, Pushpdeep’s heart has always been set in the entertainment industry and after several stints in the theatre where he wrote, directed, and acted in various short films, he got an opportunity to write and direct Jalebi, starring Rhea Chakraborty and Varun Mitra. Produced under the banner of Vishesh Films, the film was presented by Mahesh Bhatt. The movie had a theatrical release in the year 2018 and went on to post phenomenal figures on the OTT platform, Amazon Prime.

Pushpdeep has since then been associated with Jio Studios which has marked its debut in the OTT space, Voot Select in January 2022 with the web series Ranjish Hi Sahi, written and directed by Pushpdeep. A love story set in the 70s of the Mumbai film world and starring Tahir Raj Bhasin, Amala Paul, and Amrita Puri, the series has been garnering praises widely. Pushpdeep has also written additional screenplay and dialogues of Alia Bhatt and Sanjay Dutt starrer Sadak 2.

The event commenced on a congratulatory note for Mr. Bhardwaj for the unprecedented success of Ranjish Hi Sahi and soon grooved to the discussion on various aspects of scriptwriting, the role of good stories, storytelling techniques, and marketability of skills to get success in Bollywood. Nitish Raj; Co-Founder, Literia Insight, was also present at the event and he shared his insight on attributes of literature, necessary ingredients for writing, and the role of literary agencies in the adaptation of books. The panel also had ‘Aanandi’ fame author Jyoti Jha and author Krupa Somani whose ‘Dating Jiya’ has been a fan favourite. The authors shared their writing journey and experience and the associated struggles in becoming successful authors. Vikash Saxena, Co-Founder, Literia Insight, shared his views on the struggles in a writer’s life.

The event was held under the able guidance of Bhawana Gaur; President, Memesis Theatre Society, and was beautifully hosted by Sucharita Chatterjee. Conducted over zoom session, the entire event had smooth support from Vanshika and Gargi Sharma. The enthusiasm of the students of the Theatre Society made this event even more successful and the energy, insight, and wisdom shared during the session will remain etched in our memories for a very long time.