The audiences were held spellbound by one of the finest spectacles of classical dance presentations by some of the State’s leading dance exponents, performing individually and collectively at the Krishnam Classical Festival-2020, which was held at the Sri Sri Madhabdev International Auditorium of the Srimanta Sankaradeva Kalakshetra in Guwahati, recently. The festival, organised by Krishnam, a noted socio-cultural organisation of Guwahati, started off with a riveting gayan-bayan performance by Majuli’s Sri Sri Uttar Kamalabari Satra, which was directed by Muhikanta Bora Borbayan.

On the occasion, the Mahapurush Sri Sri Sankardeva Sri Sri Madhavdeva Award, instituted by Krishnam, was handed over by the Governor of Assam, Prof Jagdish Mukhi to the internationally renowned danseuse and Padma Vibhushan awardee Dr Sonal Mansingh for the year 2018, and Nrityacharjya Padmashree awardee Jatin Goswami for the year 2019. The award comprised of a memento, gamosa, angavastra, xorai, citation and a financial award. 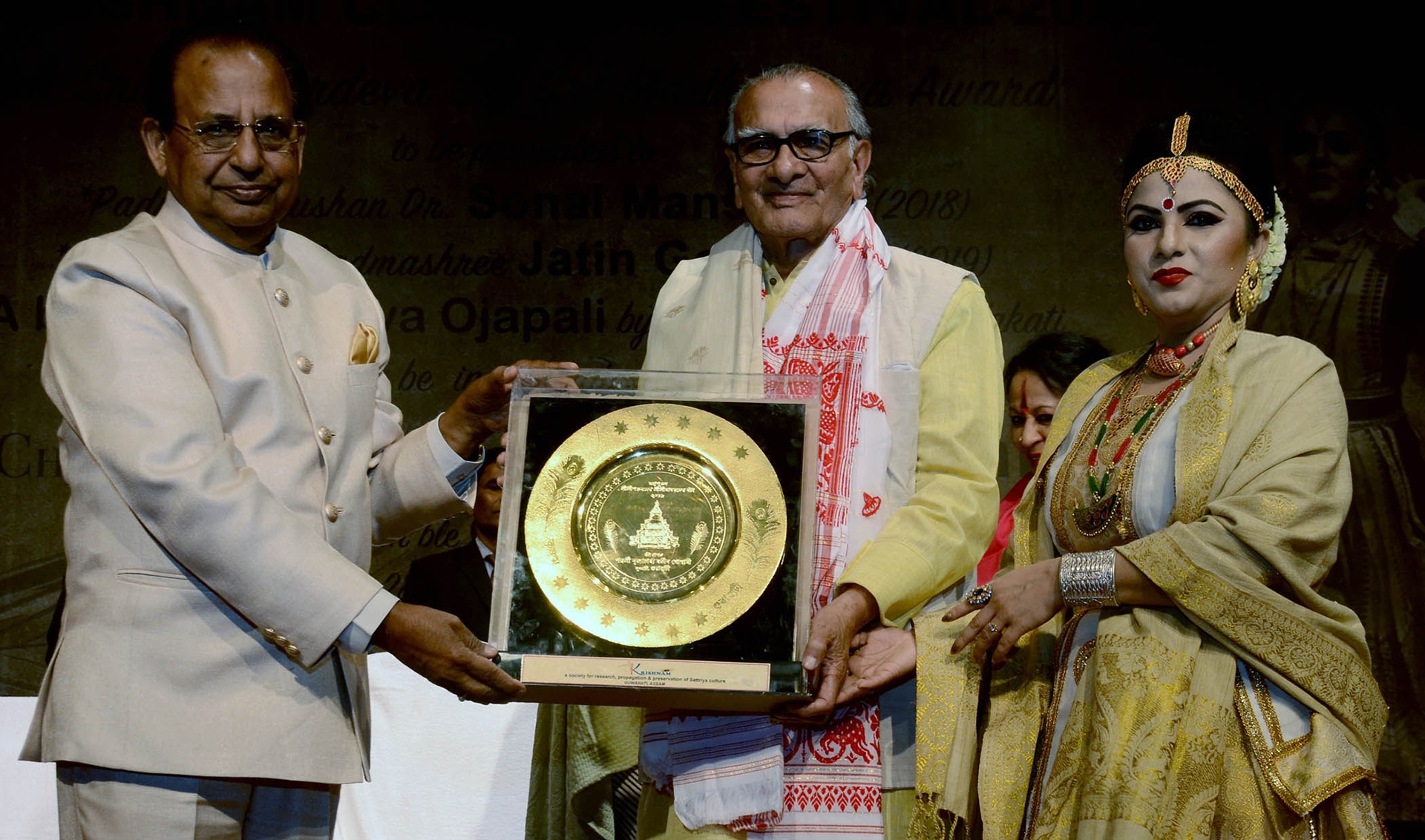 After receiving her award, Dr Sonal Mansingh, in her speech said that Assam holds a very dear place in her heart. “I feel very pleased and honoured to receive the award which is named after the great saints,” she said. It was an experience similar to what she felt after getting the Padma Shri. “Sattriya, as a classical dance form, must be preserved and promoted by everyone involved and sustained efforts should be made to maintain its purity and originality. This beautiful art form needs to be disseminated throughout the world. It’s highly imperative that the practitioners of the form should go through various books and absorb them carefully to gather sufficient knowledge in order to ensure that each mudra and characteristic is appropriately maintained while performing. Performing the Sattriya art form without proper study and a guru is inappropriate,” she said. She concluded her speech by thanking the organisers for honouring her. On the other hand, Jatin Goswami said that awards are a source of inspiration for more creative endeavours. He advised the upcoming dancers to maintain the pristine form of the Sattriya dance style in their performances, while, at the same time, adhere to the values imparted by their gurus.

The award presentation was followed by the felicitation of noted danseuse Kashmiri Hazarika Kakati’s gurus – Dimbeswar Bhuyan and Muhikanta Bora Borbayan, who were presented with a gamosa, memento and a citation each by the Governor Prof Jagdish Mukhi. 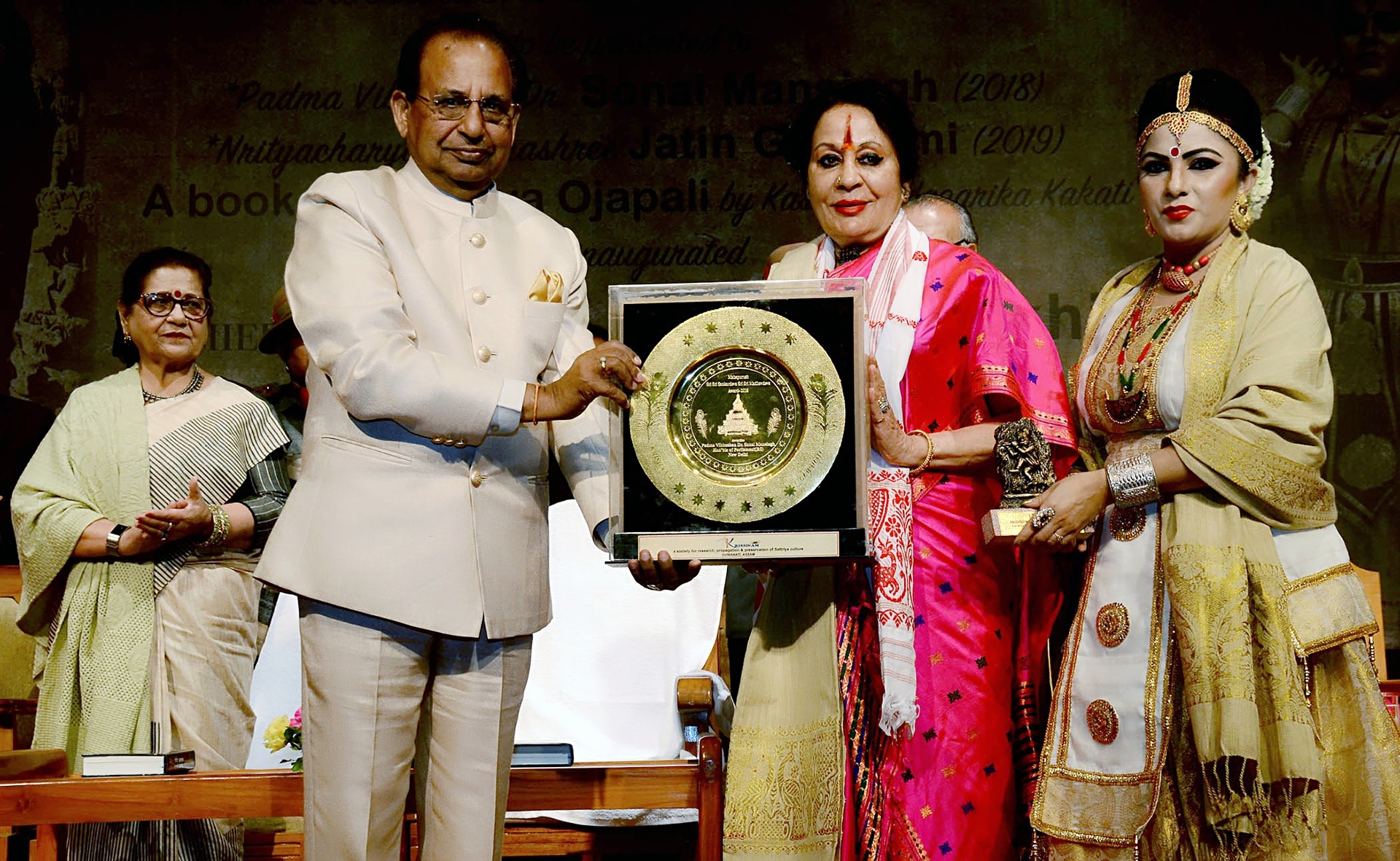 On the occasion, Kashmiri Hazarika Kakati’s research-based book Sattriya Oja-pali was also released by the Governor. The book has been published by the Assam Book Hive in three languages – Assamese, Hindi and English.

Pradip Baruah, senior journalist, noted writer and the Editor of the well-known Prantik magazine, said that the book will be a great wealth of literary-cultural information, and it has been possible because of the incredible dedication and painstaking efforts extending over a number of years that the writer has devoted to recovering and assembling many of those Bandha ragas, mostly used in Oja-Pali, from the oral traditions, and converting them into musical notations or swaralipi. “It will be of enormous help to the new generation of practitioners, and in the preservation of the priceless ragas employed in Sattriya Oja-pali. It was quite a challenging task, and the author worked extremely hard to piece together a book of enormous significance and value,” he said.

Attending as the Chief Guest in the cultural programme, the Governor said that he felt extremely pleased to present the Mahapurush Sri Sri Sankardeva Sri Sri Madhavdeva Award to two of the most celebrated artistes of Indian classical dance. “The feeling of Rasa or bhava that evolves out of the human heart undergoes creative expression in a dance form, involving bodily movements, facial expressions, hand gestures and eye movements, we term it as classical dance, and it’s a form of dance which is performed under certain rules and regulations, which are like the grammar of a language.  It’s one of the richest creations of the Sanatan Vedic civilisation. Bharata Muni’s Natya Shastra, which is also regarded as the fifth Veda, is the basis upon which classical music and dance evolved. It’s considered as the source book of the art of drama, dance and music in India. Sattriya dance, which is considered as one of the eight Indian classical dance forms, is an unique creation of the great saints – Srimanta Sankardeva and his faithful disciple Madhabdev. I urge upon the young generation to help take this great tradition in its pristine form to the world stage,” he said.

Before concluding his speech, the Governor congratulated the prominent exponents of Indian classical dance – Dr Sonal Mansingh and Jatin Goswami, for promoting the rich Indian traditional culture before the world, in addition to showering praises on Kashmiri Hazarika Kakati for endeavoring to release her book in the languages of Hindi and English as well.

The celebration got going with classical dance recitals performed in different genres by some of the State’s most renowned names. The packed audiences were regaled by the leading Sattriya exponents in their colourful costumes performing Sattriya dance in unison – Anita Sharma, Dr Mallika Kandali, Seetarani Hazarika, Sabita Saikia, Bhanu Deka Saharia and Bobby Rani Talukdar. It was followed by a wonderful Kathak dance recital by the well-known dancer Marami Medhi, which was followed by an exquisite Odissi dance performance by noted danseuse Dr Anjana Moyee Saikia, and finally, culminating in an absorbing Sattriya group dance by eminent danseuse Kashmiri Hazarika Kakati and her associates, including Pubali Dolly Gupta, Prerana Chaliha, Kasturi Phukan, Joyjeeta Das, among others.

The evening’s proceedings were ably hosted by Monmoromi Mahanta and Darshita Kakati.

Following the Adis
It is luck again when you remain cool!