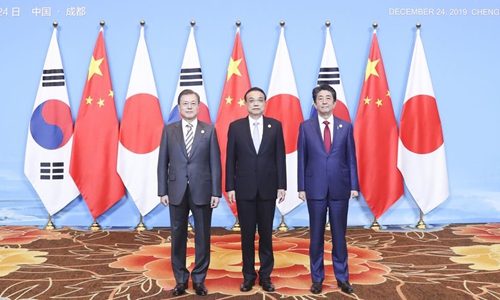 Japanese Prime Minister Yoshihide Suga has reportedly said that it would be “impossible” for him to visit South Korea to participate in the upcoming Trilateral Summit Meeting between China, Japan, and South Korea this year unless “proper measures” are taken by Seoul to address the issue of war-time forced labour. In 2018, the South Korean Supreme Court ordered two Japanese companies to compensate South Korean war-time workers for their suffering. The ruling led to a spiralling action-reaction chain between Japan and South Korea, and a deterioration in bilateral relations.

The annual trilateral China-Japan-South Korea meeting was proposed in 2004; the first meeting took place in 2008. Its objective is to bring these three East Asian countries together to forge strong stronger relations, and deliberate on regional economic cooperation and disaster relief. With no regional organisation or platform in East Asia for similar mutually beneficial cooperation and coordination, this meeting’s initiation was a milestone moment.

The meetings were held successfully for five consecutive years, followed by gaps in 2013, 2014, 2016 and 2017. Attempts at regular resumption were made in 2018—the 2018 iteration took place in 2018 in Japan, and in China the following year. The 2020 meeting is scheduled to be in Seoul, but current developments suggest that will likely not take place.

The beginning of the Trilateral Summit in a way was symbolic of the desire of these three countries to cooperate in economic and other non-controversial domains amidst contestations in the political and strategic realms. China, Japan, and South Korea have a running list of disagreements based on history, identity, and territorial claims that encompass political, security, and strategic issues. However, they recognised the short-sightedness in holding broader cooperation hostage to these disagreements. The three countries thus attempted to separate areas of cooperation from areas of conflict and rivalry; intending to  work on the first and avoiding the latter. This was considered a pragmatic move since disagreements were unlikely to be resolved in the short-term. Further, it was hoped that the positive impact of cooperative exchanges might spill over into other more fractious domains.

However, the cooperative process has gradually begun facing roadblocks instead. Over the past few years, Tokyo and Seoul have escalated offensive actions against each other. The distinction between economic cooperation and political contestation has been violated by both sides. This began with South Korea reviewing the ‘final and irreversible’ resolution of the comfort women issue. Then came the South Korean legal judgment on compensation for war-time forced labour. In the next move, both countries removed each other from their respective ‘white lists’, which imposed more restrictions on exports. The intelligence-sharing agreement between Japan and South Korea has also been caught up in the crossfire.

This is all on the bilateral front. It is strange that within the triangular equation, Japan and South Korea—both US allies—are at loggerheads, while enjoying positive relations with China. This is against the backdrop of widespread international criticism of Beijing for its role in the spread of the COVID-19 pandemic, as well as and its assertive behaviour, which has led to more countries in the region attempting to overtly stand up to China. Beijing’s exchanges with Tokyo and Seoul in dealing with the pandemic and restarting economic cooperation have both been remarkable. It is unfortunate that Japan-South Korea relations appear to be the weakest leg within the trilateral framework.

Bilateral tensions appear to continue under Yoshihide Suga, who replaced Shinzo Abe as the new Japanese prime minister. In these circumstances, it is wise for Tokyo and Seoul to work towards rapprochement through a regional platform such as the Trilateral Summit. However, it seems that Japan is in no mood to soften its posture. South Korea also appears to be adamant about holding on to its position. In 2019, South Korean exports to Japan were down by 6.9 per cent, and imports from Japan were down by 12.9 per cent, which reflect the impact of political friction on economic relations.

The biggest gains of a confrontational relationship between Japan and South Korea will accrue to China, particularly with both continuing to separately cooperate with Beijing. Even if the Trilateral Summit is cancelled this year, China will probably be able to coordinate bilateral exchanges with both countries. Mistrust and animosity between Seoul and Tokyo, their drift away from the US, and closer cooperation with China will give Beijing both economic advantage and a politico-security upper hand. A potential future mediation role for China will only strengthen its position in regional politics.

The author is associate professor with the Centre for East Asian Studies, School of International Studies, JNU, & Visiting Fellow, IPCS.

The World This Week: Joe Biden as the new American President, Pan-European measures against Islamic Extremism, and a Civil-Military divide over Myanmar elections
The World This Week: A new India-US defence agreement, another terrorist attack in France, and a looming Russia-Turkey Cold War
Comment