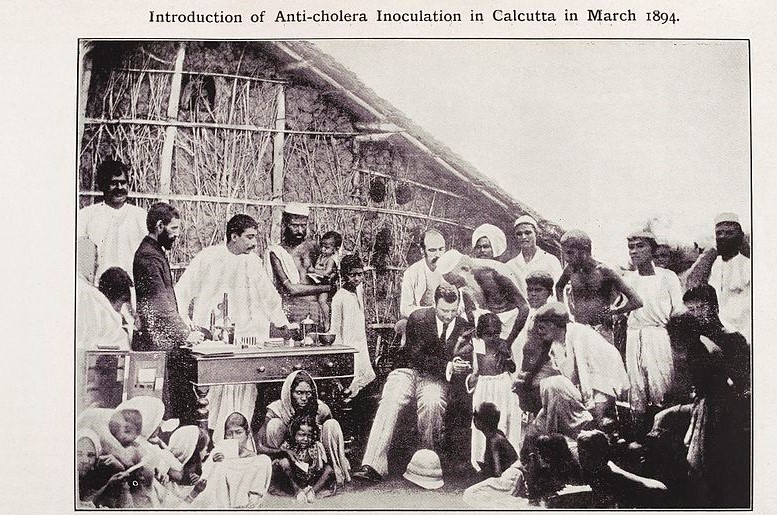 Gopalchandra was visiting Dwarikanath at home after nearly a year.

Sometimes people come out of nowhere to become partners with you. An intense association lasts for some time, and then dissolves just as unexpectedly as it was formed. The strength of such partnerships is such that it does not fade even when the partners are no longer in regular touch.

Gopal, Gopalchandra Chattopadhyay, was just such a partner for Dwarikanath. Even when they had not met each other for years, their faces did not dim in each other’s memories. Dwarika went by his friend’s advice, even though Gopal was ten years younger.

There was a brief history to their relationship. The connection between them was forged by Leonard Rogers. From cholera to leprosy, from kala-azar to plague, there was no tropical disease that Rogers was not interested in. He had joined the Medical College as professor of pathology in 1904. His efforts at developing treatments for cholera and diarrhoea could by no means be said to be commonplace—he had actually cured more than one person of cholera with intravenous injections of hypertonic saline solution and potassium permanganate pills. Locating a vein on a cholera patient for an injection often became difficult because of dehydration. The Englishman had crafted a tiny instrument named after him, the Rogers cannula, which enabled large quantities of saline to be introduced into the body.

Ever since, Dwarikanath had been following Rogers’s work closely. Gopal had joined the Medical College as an assistant microbiologist, which was when Dwarika and he had become acquainted.

The cholera vaccination had been introduced shortly before this. Both Dwarikanath and Gopalchandra involved themselves in getting people to be vaccinated. A number of people in the town of Bali in the district of Howrah had volunteered, but the outcome was not as expected—the appearance of side effects had antagonized the population at large, forcing the vaccination programme to be suspended.

It was realized much later that Haffkine’s cholera vaccination had been made with live germs, though weak ones, which may have been the cause of the reaction. Four year later, in 1896, Wilhelm Kolle had prepared a vaccine from dead germs—a cholera vaccine inactivated with heat.

Gopalchandra had in the meantime transferred his attention to the prevention of malaria. He was attempting to educate the inhabitants in the three villages of Panihati, Sukhchar, and Ghola on ways and means of keeping the disease at bay. An anti-malaria society had been set up, which published the journal Shonar Bangla. The offices of both the society and the journal were located on Premchand Baral Street, opposite the Medical College. Gopal had even been praised by Rabindranath Tagore for his initiative; Rabi babu had sought his help to prevent outbreaks of malaria in Sriniketan.

Dwarikanath, however, had not been able to abandon cholera. He had chosen the village of Kanaipur in Konnagar, sixteen miles from Calcutta, for his work. A modest village where the habitations of every family could be fitted into a circle no more than four miles across. The village had several ponds and tanks of various sizes. Many of the inhabitants were cowherds, descended from the Ghoshes. There were vegetable gardens and rice fields stretching to the horizon. Dwarikanath had purchased some thirty bighas of land here a long time ago.

When cholera had made its appearance in Kanaipur recently, Dr Ghoshal had begun to visit the village frequently, and had even cured many of those suffering from the disease. He had given the new vaccination made from dead germs to those who had not been affected by the illness. Although he had not kept a record, the number of cholera cases appeared to have diminished the following year.

A year and a half earlier, the medical fraternity learnt that Professor Bentley, who taught health sciences at the Medical College, was keen on establishing the practice of vaccination in Bengal. Gopal and Dwarika had joined hands again.

There had been a severe outbreak of cholera in Swarupnagar in the 24 Parganas district. Volunteers were gathered to vaccinate the villagers. This time it was a bilivaccine that was pressed into use, a commercially prepared tablet containing seventy billion dried vibrio cholerae organisms. Three doses had to be given, on successive days. Many were unwilling, but a combination of cajoling and threats had led to thirty per cent of the inhabitants being vaccinated, amounting to some sixteen thousand people in all. Whether coincidentally or otherwise, barely nine or ten people were afflicted by cholera this time. And yet Dwarikanath was not confident about this vaccination—it appeared to him to be a game of uncertainties, quackery of a sort. Gopal tended to agree with him. He went back to his mission of malaria prevention, all but abandoning the research that he had been engaged in.

Excerpted with permission from A Ballad Of Remittent Fever, Ashoke Mukhopadhyay, translated from the Bengali by Arunava Sinha, Aleph Book Company. Read more about the book here and buy it here.

Join The Dispatch Whatsapp Group to stay updated
The Dispatch is present across a number of social media platforms. Subscribe to our YouTube channel for exciting videos; join us on Facebook, Intagram and Twitter for quick updates and discussions. We are also available on the Telegram. Follow us on Pinterest for thousands of pictures and graphics. We care to respond to text messages on WhatsApp at 8082480136 [No calls accepted]. To contribute an article or pitch a story idea, write to us at [email protected] |Click to know more about The Dispatch, our standards and policies
TagsA Ballad of Remittent Fever Aleph Book Company Arunava Sinha Ashoke Mukhopadhyay

Highway uncertainty must end once for all: Stakeholders to Parliamentary delegation
This novel features The Awasthis of Aamnagri, a quintessential Indian joint family that sails through life and its quirks with charming agility
Comment