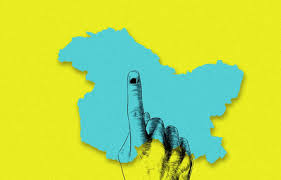 In Jammu and Kashmir, polling for the 8th phase of the District Development Council concluded peacefully at 2 P.M  today.  40.91% voter turnout was recorded by 1 PM.

Impressive turnout of voters was seen in Jammu Division  where 56.40%  electorate had exercised their franchise by  1 P.M.  In  Kashmir valley, 25.90% polling was recorded.

In the 8th Phase of DDC elections, voting was  held in  28 DDC constituencies, 13 from Kashmir division and 15 from Jammu division. A total of 168 candidates were in the fray.  Of them, 122 candidates are male and 46  are female.