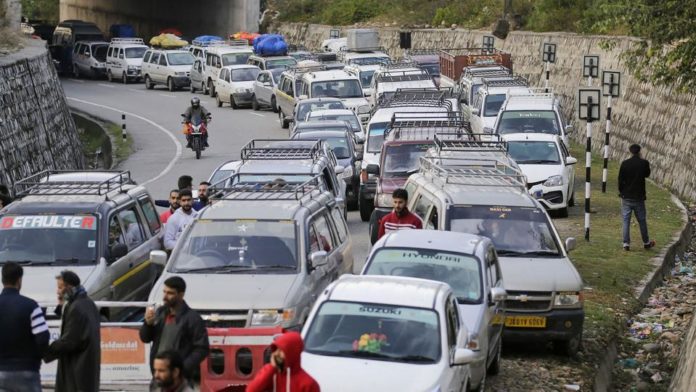 Jammu: Over 8000 vehicles were stranded in Kashmir as the Srinagar-Jammu Highway remained closed for the second day on Sunday after landslides blocked the road, officials said.

The highway was closed on Saturday afternoon after a massive landslide hit the road at Digdoll in Ramban.

“It is a big landslide and will take two to three days to clear the road. The highway will open either on Monday evening or Tuesday morning,” Superintendent of Police Traffic (rural), Muzaffar Shah said.

Earlier the highway had opened for a few hours on Saturday morning, a day after authorities closed it owing to landslides. On Friday, the upper reaches of the valley as well as capital Srinagar had received light snowfall.

The traffic police officer said that thousands of vehicles were stranded on the highway from the Kashmir side.

“More than 8000 trucks and small goods vehicles are stranded on our side. There are no passenger vehicles,” Shah said.

On December 17, the Srinagar-Jammu Highway was closed for a major part of the day after landslides hit the road at Ramban. Light motor vehicles were allowed to move in the evening after the landslides were cleared.

The highway had remained closed for four days till December 15 after western disturbances brought rain and snow to the valley from December 11 to 14. Those moving from Jammu to Srinagar had said that the condition of the road was bad and slippery.

“After every wet spell, the water seeps into the mountains causing landslides,” said Shah.

Earlier dry weather had prompted fog across the plains of the valley causing low visibility and leading to cancellation of all flights for seven days at a stretch at the Srinagar Airport from December 7 to 13. The flights started operating after visibility improved on December 14 but airfares have shown a steep rise.

Meteorologist Mohammad Hussain Mir said that the weather for the next 7 days will remain dry. “There is no prediction of any wet weather system for the next one week,” he said.

The 40-day intense winter period – Chillai Kalan – began in Kashmir valley on Saturday even as the winter has prolonged this season after five spells of snowfall and rains already since November 6.

“It was minus 7.6 degrees at Gulmarg on Saturday night and minus 6.8 degrees at Pahalgam. The coldest place of the Himalayan region was Drass at minus 21.6 degrees while it was minus 9.9 at Leh,” said an official of MeT.

From November 6-8, Kashmir received the season’s first heavy snowfall which had affected life across the valley and disrupted air and road traffic. Then more rains and snowfall followed on November 14 and 21, bringing down the temperatures and closing the main highways.