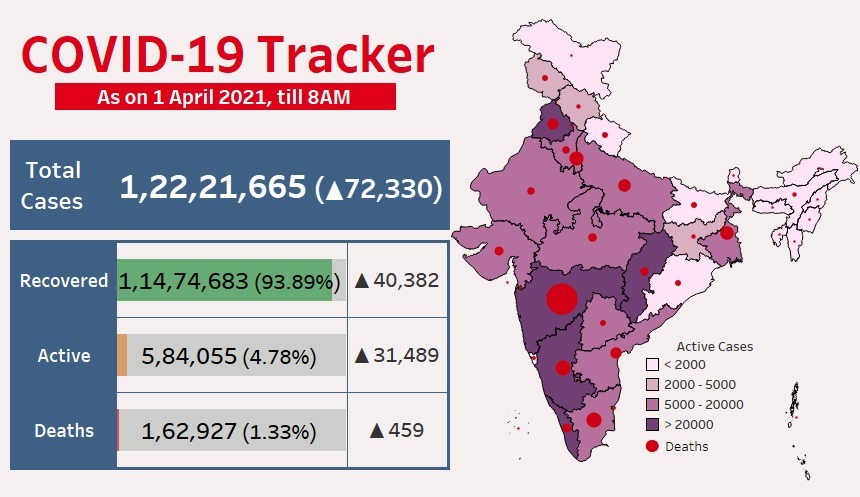 New Delhi;  Eight states continued to show a sharp rise in their daily Covid-19 tally, and accounted for 84.61% of the news cases recorded in the last 24 hours, Union ministry of health and family welfare said on Thursday. These eight states are: Maharashtra, Chhattisgarh, Karnataka, Punjab, Kerala, Tamil Nadu, Gujarat and Madhya Pradesh.

India recorded 72,330 new cases of Covid-19 on Thursday, the highest single-day spike since October 11 last year. Maharashtra continued to be the worst affected state, reporting 39,544 new cases on Wednesday evening. With 4,563 cases, Chhattisgarh trailed close behind. Karnataka is at the third position with 4,225 cases, according to data released by the health ministry on Thursday.

Maharashtra, Chhattisgarh, Karnataka, Punjab, Tamil Nadu, and Kerala also accounted for 83.01% of the 459 new fatalities recorded on Thursday. Maharashtra witnessed 227 fatalities, the highest number of deaths in the state since October last year, followed by Punjab (55) and Chhattisgarh (39).

Chhattisgarh recorded 4563 cases of Covid-19, its highest single day spike since the pandemic began. It is currently the second worst affected state in the country. Night curfews have been imposed in 22 districts of the state to tackle the recent surge.

Karnataka recorded 4225 cases of Covid-19, its highest single day spike this year. The district of Bengaluru urban continued to report the maximum number of cases, contributing 2,928 cases to the state’s tally alone.

Punjab recorded 2,944 Covid-19 cases, becoming the fourth worst affected state in the country. Chief minister Amarinder Singh while urging citizens to abide by Covid appropriate behaviour warned of stricter curbs if the state’s Covid-19 situation does not improve in a week.

Tamil Nadu recorded 2579 new cases of Covid-19 on Wednesday evening. The state government has ramped up their test-track-treat protocol and extended the ongoing Covid-19 lockdown till April 30.

Madhya Pradesh reported 2,332 new cases of Covi-19 infections, taking the state wide tally to 2,95,511. 9 fatalities were also recorded on Wednesday. The city of Indore contributed 643 cases to the state’s tally.