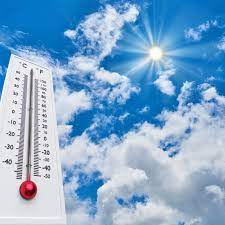 SRINAGAR: The mercury shattered all records for the month of March in Jammu city with the winter capital of J&K recording an all-time high of 37.3 degrees Celsius on Sunday.

The city’s previous high of 37.2 degrees Celsius was recorded nearly 77 years ago.

“At 37.3°C, Jammu broke the all-time maximum temperature record of 37.2°C recorded earlier on 31.3.1945—( 76 years, 11 months and 27 days ago),” a meteorological department official said here. “From last 3-4 days, the weather remained mainly fair and clear in J&K due to absence of any low-pressure system or any localized weather system,” he said, adding, “Dry and hot weather is likely to prevail for next few days as well.”

He said no significant weather was expected during the next one week except cloudiness to chances of light rain/snow over “extreme higher reaches” of North-Western and Northern parts of J&K during the night of March 20.

Earlier Srinagar recorded a low of 7.2°C against 5.9°C on the last. The temperature was 1.1°C above normal for Srinagar during this time of the year.

Pahalgam, the famous resort in south Kashmir, recorded a low of 1.3°C against 0.2°C last night. The temperature was 0.3°C below normal for the place, he said.

Kupwara town in north Kashmir recorded a low of 4.4°C against 3.3°C on the previous night. The temperature was 0.1°C less than normal, the official told Global News Service.

Jammu recorded a low of 16.9°C against 15.0°C on the previous night, the official said. The temperature was 0.3°C above normal for J&K’s winter capital during this time of the year, he said.