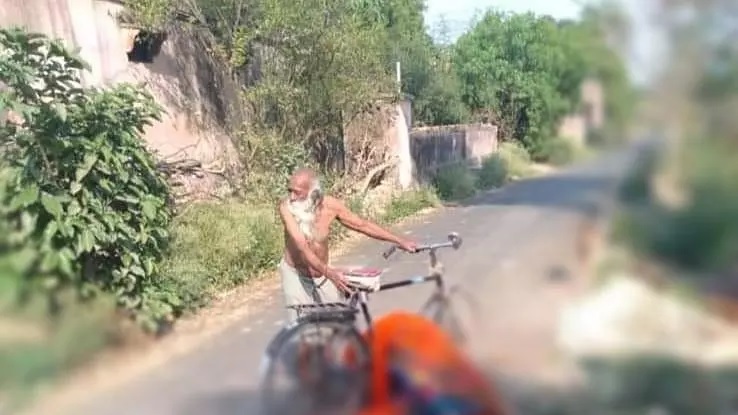 Jaunpur: A 70-year-old man was compelled to carry the body of his wife, who died due to Covid-19, for cremation on his bicycle as nobody in his village offered any help fearing they might contract the deadly virus, police said Thursday.

The heart-wrenching ordeal of the frail-looking, bearded man from Ambarpur village in the district, over 200 kms from state capital Lucknow, has been captured in two photographs circulating on social media.

While in one photo, Tilakdhari could be seen carrying the body on his bicycle, the other one shows him sitting helplessly by the roadside with the body sprawling across his fallen bicycle.

Police said Tilakdhari’s wife died due to Covid-19 at the district hospital on Apr 26, and her body was sent to his village in an ambulance.

“But the villagers including the elders refused to help him perform the last rites fearing they might also contract the virus,” SHO Madiahun Munna Lal Dhusia told PTI.

“After no one came to help, the old man decided keep his wife’s body on his cycle and go for her cremation. However, it was not possible for him to carry the body on a cycle and he kept losing his balance,” the SHO said.

He said the police helped him after coming to know about the incident.

Police personnel reached there with an ambulance and material required for conducting the last rites and took the body to Ramghat where the cremation was performed, he said.

40 countries have come forward to provide assistance to India: MEA
Over 1.70 crore people register in Cowin portal on 1st day of registration for vaccination
Comment