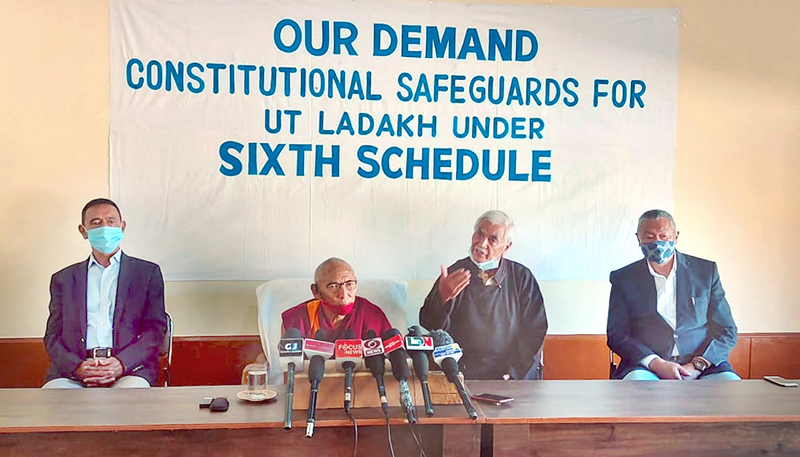 The fifth of August 2019 came as a day of rejoicing for the people of Ladakh.With the Government of India’s decision to revoke the special status of Jammu & Kashmir State granted under Article 370 of the Constitution of India also came the declaration of Ladakh as a union territory, completely separating the region from the administrative bullying of the erstwhile Jammu and Kashmir government based in Srinagar and Jammu. But that celebration was short-lived, marred as it was by the spread of the COVID-19 pandemic, which compelled the government to impose a nationwide lockdown on March 24, 2020.The pandemic also complicated political developments in Leh district, which held elections in October for the Ladakh Autonomous Hill Development Council (LAHDC), Leh.The elections came amid a growing call for Ladakh to be granted status under the 6th Schedule of the Indian Constitution. While Article 370 was flawed for many reasons, it did provide a number of benefits to Ladakh’s unique and remote population with respect to promoting opportunities for economic development, environmental protection, and preserving the distinct lifestyle of a minority population living along India’s northern border.
Under these circumstances, several religious and political parties fromLeh formed an apex body known as thePeople’s Movement for the Sixth Schedule for Ladakh.Understanding that the government had yet to give any serious notice to this demand, the leaders of the movement called for a boycott of theLAHDC, Leh’s election.As the deadline for nominations and the date of the election drew nearer, the government gave the Movement its attention and hurriedly invited its top leaders to New Delhi by arranging a charter flight. The leaders of the apex body attended a meeting convened by the Union Home Minister and returned to Leh with the promise granted by the Union Home Minister and others in the government that their demands will be given due attention after the election. Under such circumstances the boycott call was withdrawn. The election authorities in Leh had to extend the last date of submission of nomination forms and the aspirant candidates. The election was held on the scheduled date and the BJP gained a majority of votes and formed the 6th LAHDC, Leh. After the election, the Union Government invited the leaders of the LAHDC for a talk on the 6th schedule issue, but they could not go to New Delhi as some were found to be affected by COVID-19. Hence the talks were postponed.
Soon after Ladakh was declared a union territory, many people called for Ladakh’s inclusion in the 6th Schedule of the Indian Constitution. These calls came from people hailing from all walks of life, irrespective of their religion and region. In particular, educated youth took it seriously, seeing that in the absence of protections like Article 370, their chances of getting jobs in the government will dwindle-a probable outcome given a number of challenges, including geography.
Ladakh is situatedat an elevation of over 11,000 feet above sea level, surrounded by High Mountain passes as well as challenging climatic conditions that can make for a harsh life. Students face these challenges, when, for almost six months of the year temperatures remain below freezing-a challenge Ladakhi students’ peers in the plains of the country do not face. Constitutional protections that would afford Ladakhi youths greater access to scant jobs. Otherwise, the people who reside in this border area may be over run by job seekers coming from the plains of the country, taking away the lion’s share of jobs under the new arrangements of the union territory.
With the above situation in mind, the National Commission of Scheduled Tribes and Tribal Minister of the Government of India had initially favoured the extension of the 6th Schedule to Ladakh. Even the Minister ofTribal Affairs favored it. But at present the government has not come forward with any positive hint. The only suggestion in the press is a suggestion that theGovernment of India favours the status quo, claiming that the autonomous council under the Ladakh Autonomous Hill Development Council Act of 1997 vested the present Council with powers “more or less in line with the Sixth Schedule of the Constitution”.
Indeed, even if the government’s cautiously worded statement is based in facts, the formal 6th Schedule provision would go a long way to protect the real identity of Ladakhis. If the current situation results in a long stalemate, no one will benefit.
A similar type of issue exists with respect to naming an official language for the new Union Territory of Ladakh. In Leh District, there is currently a campaign underway to make Bhoti the official language of the region. In Kargil District, there are demands that the official language of the union territory should be Ladakhi. I personally support the views expressed by the Kargilis, that the name of our new union territory should be Ladakhi. The Ladakhi language has remained the socio-cultural language of the people of Ladakh, just as each of the other two divisions of erstwhile State of Jammu and Kashmir had a single name for the common regional language (i.e. Dogri for Jammu and Kashmiri for the Kashmir). But the term”Bhoti” is a new name coined by certain groups of people that does not reflect the common regional language spoken in both of the union territory’s districts and, furthermore, has no constitutional mandate.

The author is Director Centre for Research on Ladakh