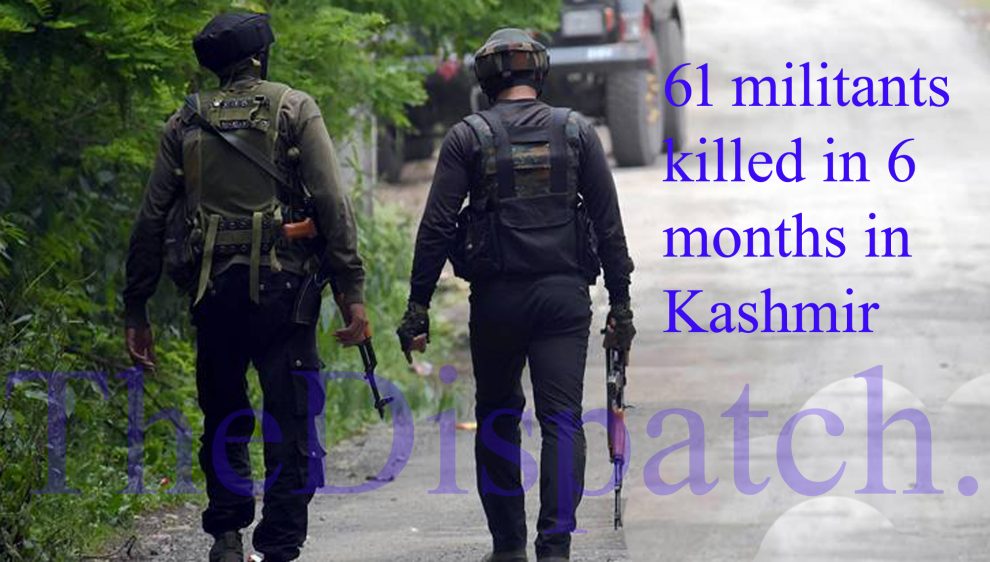 Srinagar: As many as 61 militants, including top commanders, have been killed by security forces in different encounters during the last six months in Kashmir valley.

An Army official said that so far 61 militants, including top commanders, have been killed during the last six months by security forces in Kashmir valley. “Scores of Over Ground Workers (OGWs) and militants have also been arrested during this time,” he added.

During the last three days, five militants, including a top LeT commander, were killed in two separate encounters in Kashmir valley. A top Lashkar-e-Taiba (LeT) commander and a Pakistani militant were on Tuesday killed while three CRPF personnel were injured in an encounter at Maloora in Srinagar outskirts. On Wednesday, three TRF militants were on Wednesday killed and two Army soldiers injured in an encounter which ensued after security forces launched a Cordon and Search Operation (CASO) in south Kashmir’s Kulgam district.

Inspector General of Police (IGP), Kashmir range, Vijay Kumar earlier this week said that militants are targeting off-duty policemen and civilians to create a fear psychosis among the masses in the valley and issued a stern warning asking ultras to stop going after soft targets or face consequences.

Mr Kumar said there are militant module operations in Srinagar city also including a sleeper cell, which carries out attacks and then again go back to living a normal life. “Tracking a fulltime militant is easy, but it is difficult to keep a tab on the militants working in the sleeper cell,” he said.

However, Mr Kumar said that police has intensified its surveillance grid and will soon bust the militant module operating in the city.